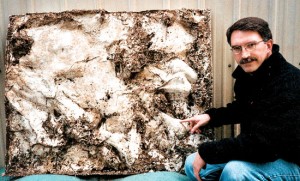 What I have always found extraordinary is the stunning inability of skilled scientists to come to grips with new data, although the Sasquatch is hardly new data. This item shows us just how hard it is. It is almost as if the man were brainwashed since childhood.

I suspect we are dealing with the phenomena of extraordinary memory that finds it difficult to use logic to overcome the emotional content of the remembered position. Once this is set up, the memory is not easily lost because so much has been invested in that memory.

Thus when confronted with a clear casting that you or I could not properly interpret ourselves nor expect anyone to fake anyway, the trained observer sees exactly what is there and understands what he is looking at. That casting just went up massively in my world as outright confirmation of the Sasquatch.

Sooner or later, the heavy money will be spent to film this creature at night and to even track specimens and more appropriately to establish actual contact. A bushel of apples would be my first choice and plenty of cameras able to no night work.

The present efforts smacks terribly of amateurism when real large game trackers do exist who know how to be as cunning a the quarry. Recall that no wolverine ever gets trapped twice and after the first encounter, he will make it his business to work your trap line until he drives you out of his country. You will never see him either.

Wash. — It’s easy not to believe in Bigfoot. It’s harder to accept the possibility, and harder still to go public with that acceptance.

Fingerprint expert Jimmy Chilcutt says he has “had that used against me, or tried to use against me, in court.” Members of the jury, how seriously can you take the testimony of a man who who believes in THAT?


Earlier this spring, while up for a promotion within the faculty of Idaho State University, Jeff Meldrum found “the bias and closed narrowmindedness of a few of my colleagues rearing its ugly head once again.”

Meldrum’s promotion was approved, but he, Chilcutt and others researching the Sasquatch phenomenon remain frustrated by those peers who remain unwilling even to consider their findings.

“It’s baffling that academics, who one would think would be objective and open-minded to questions on the fringes of knowledge,” Meldrum said, “would instead not be fair-minded and egalitarian in the treatment of their colleagues that delve into that realm to explore where the evidence will lead.

“But the scientific community is a community of people and individually they are subject to all the biases and prejudices of any other cross-section of humanity.”

A number renowned scientists — notably George Schaller, one of the world’s preeminent naturalists, and primatologist Jane Goodall, known for her chimpanzee research — have publicly called for more a open-minded approach by science to the research of Meldrum and others.

But perhaps no scientist has undergone a more dramatic transformation in terms of that open-mindedness than Daris Swindler.

A long-time professor of anthropology at the University of Washington, Swindler quite literally wrote the book on the comparative anatomy of man, apes and chimpanzees. His masterwork, “An Atlas of Primate Gross Anatomy,” is considered mandatory reading for all primate anatomists.

And for many years, Swindler was publicly adamant that Sasquatch did not and could not exist.

“He was the required poo-poo guy when it came to anything Bigfoot,” says John Green, a retired newspaper publisher and editor British Columbia. “If invited, he would give the scientific comment that there simply couldn’t be any such thing.”

In September 2000, though, a group of researchers took a 31/2-by-5 foot cast of what appeared to be a partial body print of a large animal reclining in the mud in a Skamania County area of the Gifford Pinchot National Forest called Skookum Meadow.

Soon after the discovery a number of scientists, including Meldrum and Swindler, were invited to an Edmonds, Wash., hotel to study the imprint cast and discuss their findings as part of a documentary film, “Legend Meets Science.”

“He looked at that cast and saw the very same thing I did,” recalls Meldrum. “His attention immediately was drawn to this remarkable Achilles tendon and very broad heel imprint, and what we interpreted to be the prominent buttock.

“The combination of short, pronounced buttock and a well-developed Achilles tendon equals biped — and nothing else.”

For Swindler, though, that realization was profoundly affecting — something that became obvious to the documentary film’s producer, Doug Hajicek, when he went to Swindler’s suite to find out what his on-camera testimony would be.

“He got really choked up,” Hajicek said of Swindler, who died in 2007. “He literally had tears coming down his face.”

Swindler’s emotions, Hajicek said, came from having just talked over the phone with his family to tell them about his findings, “because what he was about to say on camera was probably going to change his life … that, basically, these things were real.”