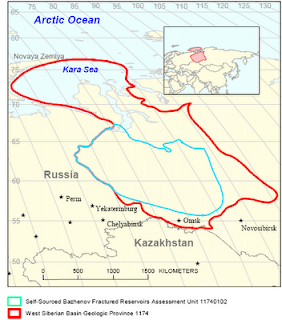 What this all means is that at $100 per barrel, we can if it is necessary, operate the global economy on oil at the same standard as the USA for decades at least if not centuries. Technology has pretty completely unleashed the Bakken like reservoirs and this article informs us that the Western Siberian Basin is the super elephant in the room.


At the same time, we are discovering, or more properly reacquainting ourselves with similar formations world wide and are assured this oil exists everywhere in some shape or the other.


Peak conventional oil is well upon us and is showing slippage everywhere. The short fall is been picked up by the rapid increase in the unconventional oil. The accelerating growth rate suggests that we will see North America exit the world market in less than a decade.


Recall that the entire globe has used about a trillion barrels of oil to date. F racking technology has placed ten times that at least into inventory.


I still expect to also see real world oil consumption to run flat and enter decline as new energy producing technologies begin to bite. In the meantime we have a wall of $100 oil in place to provide us the needed cushion.

The Bazhenov Formation (Tithonian to Berriasian) occupies about 1 million km 2 in the central part of the West Siberian plate and is buried by 2,000 to 3,000 meters of younger sediments. The aggregate mass of organic matter in the Bazhenov Formation is as high as 18 trillion tons (126 trillion barrels of oil equivalent). It is known as one of the largest oil sources in the world. About 500 samples from 39 oil wells throughout the formation were analyzed; it was shown that Bazhenov rocks contain more U, Mo, V, Cu, Zn, and Ni than average black shales; moreover, the concentrations of these elements increase toward the center of the paleobasin.


There can be 6 to 8 barrels of oil in a ton, depending on density.


The formation feeds conventional oil fields. Those conventional oilfields have over 144 billion barrels of oil. There have been some wells drilled into the Bazhenov tight oil area and those are producing 400 barrels of oil per day, which is similar to the productivity of Bakken oil wells.


Russia has the potential to develop the Bazhenov Formation to remain and energy superpower for another 100 years.

In light of the above it is interesting to estimate oil reserves on the basis of the following considerations. Let us assume that the productive pay area controlled by the AHFP zone is equal to this zone, i.e., 15,600 sq km, and that the net pay is equal to the vertical extent of fractures, i.e., 350 m. Let the fracture volume be 0.3% (f = 0.003). At oil density of 0.8 t/cu m and oil formation factor 1.4 (parameters typical of Jurassic oils) the oil reserves calculated by the volumetric method are in excess of 9 billion tons.


We want to emphasize that these are recoverable reserves, because we calculate only the amount of oil contained in the fractures; if proper oil production technology is used, all oil will be recovered. In this connection we want to say that the depletion drive pilot production of Jurassic reservoirs has already yielded almost 300,000 tons in some wells.


It should be also noted that in this reserve calculation we used minimum parameters deliberately. But there are good reasons to assume greater productive pay area, net pay, and fracture porosity. With account of such changes the volume of the oil-filled fractures will increase at least 2-3 times and oil reserves will amount to 20-30 billion tons (140 billion to 210 billion barrels).


USGS technically recoverable oil 1995 estimate was 151 million barrels of oil for the Bakken.

(USGS 2007) North Dakota and Montana have an estimated 3.0 to 4.3 billion barrels of undiscovered, technically recoverable oil in an area known as the Bakken Formation

If the Bazhenov is Similar to Bakken


The 2000 estimate of 140 to 210 billion barrels of recoverable oil could be 15 to 100 times too low. The increase would be because of the improved horizontal drilling technology enabling a higher recover rate. 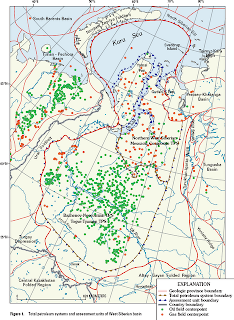 
Forbes - another oil shale play that dwarfs the Bakken. It’s called The Bazhenov. It’s in Western Siberia, in Russia. And while the Bakken is big, the Bazhenov — according to a report last week by Sanford Bernstein’s lead international oil analyst Oswald Clint — “covers 2.3 million square kilometers or 570 million acres, which is the size of Texas and the Gulf of Mexico combined.” This is 80 times bigger than the Bakken.

Note : This formation has 126 trillion barrels of oil equivalent biomass If the Bazhenov is Similar to Bakken, then a year 2000 estimate of 140 to 210 billion barrels of recoverable oil could be 15 to 100 times too low. The increase would be because of the improved horizontal drilling technology enabling a higher recover rate.


This unconventional assessment unit includes fractured Bazhenov siliceous shales, which are also source rocks for these reservoirs. The shales cover most of the basin, but their productivity has been demonstrated mainly in the Greater Salym area. In-place resources of oil are apparently very large, but the ability of the reservoir rocks to produce varies greatly and is poorly understood. There is much similarity between this unit and the Bakken play of the Williston basin.

Source rocks are deep-marine siliceous and calcareous shales and siliciliths of the Volgian-lower Berriasian Bazhenov Formation. The formation is 20 to 50 m thick and contains 5 to 20 percent TOC. The kerogen is of Type II.

MATURATION: The Bazhenov Formation is presently in the oil window zone over most of the petroleum system area. Maximum maturation was achieved in the Oligocene.


The West Siberian basin is the largest petroleum basin in the world covering an area of about 2.2 million km 2.


Previous estimates for Western Siberian oil were 144 to 350 billion barrel. This is from the oil that leaked out of the Bazhenov oil formation.


There is also over a thousand trillion cubic feet of natural gas in the formation.


Russia already produces about 10 million barrels of oil per day, putting it about a million barrels a day ahead of Saudi Arabia, the largest producer in the Middle East.

“The story for Alberta is what’s happening in the Russian market right now. All the focus is on China’s shale gas but it’s the tight oil play in Russia that I’m starting to get really interested in,” he told the Journal.


There will be no political or environmental factors to block development of the Russian oil and gas resources.

Those concerned about the climate and air and water pollution effects oil and natural gas will have to hope for development of some other energy breakthrough as the economics and political interests are in line for this to be developed. Only radically cheaper nuclear fission, new nuclear fusion or some other lower cost energy will shift development from this energy.


Getting access to the Bazhenov appears to be a key element in both ExxonMobil and Statoil‘s big new joint ventures with Kremlin-controlled Rosneft. Exxon’s recent statement says the two companies have agreed “to jointly develop tight oil production technologies in Western Siberia.”

No wonder. The geology of the Bazhenov looks just as good if not better. Its pay zone averages about 100 feet thick, and as Clint points out, the Bazhenov has lots of cracks and fractures that could make its oil flow more readily. The couple of test wells that he cites flowed at an average of 400 barrels per day. That’s in line with the Bakken average.

This Siberian bonanza might be news to most of us, but it’s old news to Big Oil. The conventional oil fields of Siberia have been producing millions of barrels a day for decades — oil that originated in the Bazhenov “source rock” then slowly oozed up over the millenia. From the looks of it, geologists have been looking at the Bazhenov for more than 20 years.


53 page USGS study of the western siberian oil basin. The study was from 2003


The latest Continental oil estimates are for 45 billion barrels of oil to be recoverable from the North Dakota portion of the Bakken oil formation.


A play 80 times bigger (than a 24 billion barrel estimate for the Bakken) like the Bazhenov would imply 1,920 billion barrels. That’s a preposterous figure, enough oil to satisfy all of current global demand for 64 years, or to do 5 million bpd for more than 1,000 years. Rosneft, says Clint, has already estimated 18 billion barrels on its Bazhenov acreage.