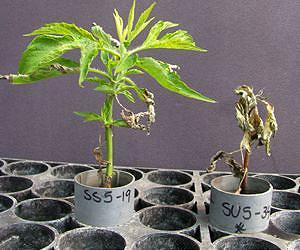 What gets me is that the science is still shallowly understood for a product applied universally worldwide for fifty years. Here we get an indication that the bacteria mix in the soil supports the effect of the herbicide.

Beyond that we also learn that herbicide resistance may naturally select plants that are more advantageously robust. For once we have a good unexpected consequence. There is clear merit to simply selecting superior plant strains that can handle the biological background. This has always been the intent anyway, but deliberately forcing it with herbicides is not obvious.

So perhaps we can develop some super crops and save ourselves a lot of agravation.

Glyphosate-resistant 'superweeds' may be less susceptible to diseases

by Brian Wallheimer for Purdue News

Purdue scientists found that soil microbes may play a role in how those weeds react to the popular herbicide glyphosate. Here, glyphosate-susceptible biotypes of giant ragweed react differently to the herbicide. The plant on the left is in sterilized field soil void of microbes, while the plant on the right is in unsterilized soil. (Photo provided by Jessica Schafer).

Scientists searching for clues to understand how superweeds obtain resistance to the popular herbicide glyphosate may have been missing a critical piece of information, a Purdue University study shows. Glyphosate, the active ingredient in the weed killer sold under the name RoundUp, is the most widely used herbicide in the United States, but some plants have grown resistant to it.

Most laboratory tests done to understand glyphosate resistance are done in sterile soil, void of those microbes. Schafer said Purdue's findings, published online early in the journal Weed Science, show that those microbes may play a significant role in how glyphosate affects plants.

"The soil you're growing the plants in is important to the results," Schafer said. "If we're growing in a sterile media, we could get some false positive results because the plants are more tolerant to glyphosate in those conditions."

Hallett and Schafer grew giant ragweed, horseweed and common lambsquarter in both sterile soil and field soil and subjected them to glyphosate. In each soil, strains of weeds both susceptible and resistant to glyphosate were tested.

Both versions of giant ragweed were damaged more from the glyphosate in field soil. The susceptible version of common lambsquarter was also more heavily damaged in field soil. Horseweed fared the same no matter which soil or strain - susceptible or resistant.

The results show that microbes can play an important role in the activity of glyphosate, presumably by invading the glyphosate-weakened plants. The results also suggest that glyphosate-resistant weeds may be more resistant to disease pressure as well.

"Soil microbes can be minor to major contributors to how glyphosate is able to affect plants," Hallett said. "We may be selecting not only for glyphosate resistance, but inadvertently selecting for weeds that have disease resistance as well."

A weed's ability to withstand glyphosate was based on dry shoot and root weight after testing. The sterile soil used in the study came from field soil exposed to gamma radiation to kill microbes and bacteria. The irradiated soil was tested to ensure that its nutrients were not diminished.

Hallett, Johnson and Schafer said further studies would look at how fungi in the soil affect root development, both with and without glyphosate.

"Dirt is a living organism," Johnson said. "It's important to know how all the pieces interact."