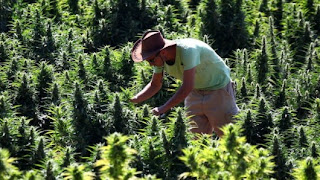 Maybe the US government can get this one right.

Without question marijuana has significant medical application. The problem has been the issue of impairment which no one has ever been able to put a nice face on. In fact it is a giant liability. Stripping out that liability will allow the drug aspect to be applied widely as truly needed.

It has long been shown to be a boon to long term chronic pain amelioration. Been high had zero to do with that outcome it appears. Thus we have a solution that ameliorates pain, allows normal function and is not addictive. Tea or coffee anyone?

I was finding it difficult to reconcile the obvious medical benefit with the equally obvious deleterious impairment suffered into an ethical protocol that could plausibly be safe. This steps around the problem neatly


Israeli company grows medical marijuana which doesn't get you high
By Adam Williams
04:04 July 6, 2012
The new cannabis strain offers the drug's medicinal benefits to patients who do not wish to feel intoxicated


Situated in an undisclosed location near Tzfat, northern Israel, is a government-approved medical marijuana plantation which was founded in 2004 by a retired biology teacher. Named Tikun Olam, the plantation has created a new cannabis strain which contains very low traces of tetrahydrocannabinol (THC), the main constituent in cannabis responsible for making people feel "stoned". By virtually eliminating THC in the new strain, Tikun Olam can now offer the drug's medicinal benefits to those patients who wish to keep a clear head.

Marijuana contains over 60 constituents named cannabinoids and though THC is the most famous due to its psychoactive effects, another important constituent is cannabidiol (CBD). CBD is believed by some researchers to offer anti-inflammatory benefits, thus offering the potential to relieve pain without making patients intoxicated, if the THC-to-CBD concentrations can be correctly balanced.

The new strain of marijuana created at Tikun Olam does just that. Dubbed Avidekel, it contains less than one percent THC, compared to the company's most popular strain Erez, which contains 23 percent THC. Avidekel couples this with an increased concentration of CBD, said to be almost 16 percent. How real-world use of Avidekel compares to existing medical marijuana products designed to limit intoxication, such as the under the tongue spray Sativex, is still unclear.

Although many patients feel the intoxicating effects of THC to be a beneficial element of medical marijuana use, others find it a hindrance to performing every day activities and so welcome the opportunity to take the marijuana while maintaining sobriety.

"It's a huge advantage," said one of the ten patients to make use of the Avidekel strain in the last six months, while speaking to Reuters, "I can smoke during the day, function with a lot less pain and still be focused, work and drive. It is a great gift."

Recreational use of cannabis is prohibited under Israeli law, however the drug is currently used medically to treat roughly 9,000 people suffering from illnesses such as cancer, Parkinson’s disease, multiple sclerosis and Crohn’s disease.

The promotional video below sheds more light on the Tikun Olam plantation.
\
Posted by arclein at 12:00 AM

Some proponents of medical marijuana argue that pot is "natural" and therefore better, or at least no worse, than legally prescribed drugs, which may be addictive and may carry dangerous side effects. But natural is not the standard for whether a drug is safe and effective.