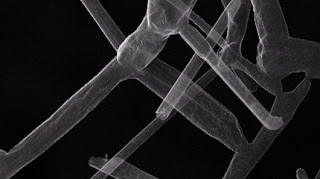 The march of modern carbon continues, now producing a carbon fiber foam. Nothing is said regarding the strength of the internal bonding although the natural potential is extraordinary. If good enough we may get a laminar panel with metallic layers partially absorbing the metal itself.

We are rapidly seeing some astounding material, mostly thanks to our growing mastery of carbon manipulation.

All this is important if we desire to really travel into space in our own magnetic field exclusion vessels(MFEV).

A microscope image of aerographite, which is now officially the world's lightest solid material (Image: Technical University of Hamburg)

http://www.gizmag.com/aerographite-worlds-lightest-material/23295/
While they were each once hailed as the lightest solid material ever made, metallic microlattice and aerogel have now been moved back to second and third place (respectively), with aerographite taking the crown. Developed by a team from the Technical University of Hamburg and Germany’s University of Kiel, the material is composed of 99.99 percent air, along with a three-dimensional network of porous carbon nanotubes that were grown into each other.

Aerographite has a density of less than 0.2 milligrams per cubic centimeter, which allows it be compressed by a factor of 1,000, then subsequently spring back to its original state. Despite its extremely low density, it is black and optically-opaque in appearance. By contrast, the density of metallic microlattice sits at 0.9 mg per cubic centimeter.

The scientists discovered the sponge-like material when they were researching three-dimensionally cross-linked carbon structures. It is reportedly much more robust than the relatively fragile aerogel, being able to withstand at least 35 times as much mechanical force for its density. It is grown in a one-step process using zinc oxide templates, which allow blocks of the material to be created in various shapes, in sizes as large as several cubic centimeters.

Because it is electrically conductive and chemical-resistant, it could potentially find its way into devices such as batteries.

The development of aerographite was officially announced in a paper that was published yesterday, in the journal Advanced Materials.