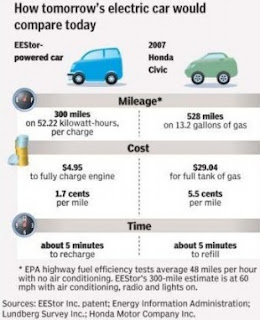 This is the first meaningful release from EEStor in months and is welcome. It appears that they have successfully produced a working element hopefully using their manufacturing technology. That is is not easy to perfect is no surprise. In fact I would have been more surprised had they met their projected schedule for this.

Most folks fail to understand that a three month program in development work often turns out to be on the basis of one day of progress per week.

The key milestone was met two years ago and that was the production of the nanometer sized capacitor particles. The second milestone was to assemble a unit that used the particles efficiently. It appears that this has now been done although ample fuss work remains I am sure.

After this we build batteries.

The film units themselves will be produced in volume and at speed. Thus mass production will be simple to set up.

As usual new technology is a test in patience and success here is massively important.

Battery layers will be imbedded into structural shells because these are safe enough with zero reagents to worry about. Battery storage will become cheap and ubiquitous.

CEDAR PARK, Texas, June 21, 2012 /PRNewswire/ -- EEStor Inc. ("EEStor") announced today that it has successfully completed production of an electrical energy storage unit (EESU) dielectric layer that will potentially allow its technology to achieve an energy density which would be competitive against all other electrical energy storage technologies. At the completion of additional internal testing and refinements by EEStor, EEStor plans to obtain third party testing and certification of the EESU. On May 15, 2012, EEStor had announced that it was working on improvements in its film morphology and the success announced today reflects the completion of these improvements.

About EEStor Inc. Headquartered in Cedar Park, Texas, EEStor Inc. is dedicated to the design, development, and manufacture of high-density energy storage devices. EEStor Inc. is utilizing revolutionary ultra-capacitor architecture and environmentally friendly materials in the production of our EESU's.
Posted by arclein at 12:00 AM