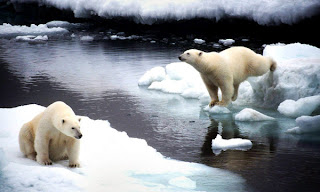 Now we know that present conditions have existed in the Arctic for a good four millions of years. Prior to that, the lack of enough land made ice cap development and the sequestering of sea ice difficult. Present conditions are the geological anomaly.

Our own conditions which are recent and is known as the Holocene is a direct result of the Pleistocene Nonconformity which settled us with a remarkably fortuitous reconfiguration of conditions that eliminated the Northern Ice Age. It is my contention that it is deliberate or alternatively so remarkably impossible that it is unnatural. I will not grind the arguments out today but searching this blog will get it for you.

This also implies that the Pleistocene menagerie also emerged around the same time. It also implies that all such creatures are still closely related to present species as to allow plausible recovery through DNA recovery and cloning. This will include the short faced bear, the dire wolf, the giant beaver, the mega lion, the giant elk and many others. They are already tackling the mammoth.


How Brown and Polar Bears Split Up, but Continued Coupling

A new study extends the origin of polar bears back to 5 million years instead of 600,000.

For many years, scientists who study the history of life on earth had to make do with fossils.

That worked out well enough for some species that left bones to be buried in river sediment, or impressions in mud that turned to stone.

But other creatures, like polar bears, live in more ephemeral environments. When you spend your days on floes of Arctic Sea ice, death usually means burial at sea and skeletons lost to time.

The few polar bear fossils found on land, where they spend much less time, are scattered, accidental discoveries.

As a result, a good look at the history of polar bear evolution has had to wait for investigations of the DNA of living animals. Comparing the DNA of different but related species can work as a kind of microscope to look at events as the species separated — events that are otherwise lost in deep time.

Recently, with studies of whole genomes, the magnification on the microscope has been increasing and greater detail has emerged. On Monday a new report in Proceedings of the National Academy of Sciences pushed back the origin of polar bears about four and a half million years.

The last estimate, published in April in Science, put it at 600,000 years ago, and the new study has it at five million. It reinforces the previous conclusion that polar bears are not a recent spinoff of brown bears, and it paints a more detailed picture of what the bears have been doing all this time as they evolved into the charismatic megafauna we now use to sell soft drinks and promote environmental causes.

It has been a busy couple of years for studies of polar bear evolution. In 2010, a mitochondrial DNA study of modern bears suggested that the polar bears might have been a recent offshoot of brown bears, perhaps only 130,000 years old. But mitochondria are little energy factories passed down in the mother’s egg, and they tell the story of the female line only.

The study that pushed back polar bears’ origin to about 600,000 years ago was based on snippets of nuclear DNA, which comes from both sexes.

But those snippets represented only selected bits; the new study, by Webb Miller and Stephan C. Schuster of Penn State, Charlotte Lindqvist of the University at Buffalo, and an international team of 23 other scientists, looked at the full genomes of polar bears, brown bears and black bears. Dr. Lindqvist, the senior author, said the full-genome approach enabled the scientists to look at polar bear history in new depth. She was also the first author of the mitochondrial DNA study.

The progress of species formation, at least in this case, is a bit like a long, ambivalent divorce in which the two parties separate but occasionally fall back into bed even after the official decree.

Dr. Lindqvist, said the DNA showed evidence of intermittent interbreeding between brown and polar bears from the time of the split until the present — most likely during periods of warming, when brown bears moved north and polar bears were forced onto land.

In most brown bears the percentage of genetic material traceable to polar bears is 2 percent. But on the Alexander Archipelago, a 300-mile-long string of islands off the southeast coast of Alaska, the brown bears have 5 to 10 percent polar bear DNA, suggesting more frequent interbreeding.

The microscope of whole-genome studies and comparisons also gives glimpses into the adaptation of polar bears to the Arctic environment, including genes for high fat content in milk and for blubber accumulation.

The report, of course, offers new material for arguments about what will happen to the bears as the planet warms. On the one hand, if they’ve been around so long and have survived many episodes of warming, you could say they ought to be used to it by now. On the other hand, you could point out that all those warming episodes were bottlenecks in evolution that led to a current species with much less diversity than brown bears, so the current species is ill prepared for a new shock.

And the current warming is happening much faster than any previous episodes.

One thing the evidence does suggest, however, is that there may be more interbreeding ahead.