Islamists Have the Keys to the Arab World? 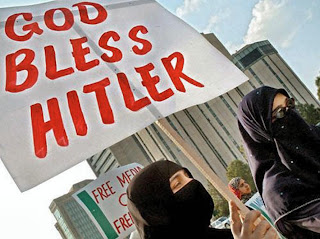 This item nicely spells out the real and present nature of the Islamist Threat which I want to emphasize has zip to do with Islam except to provide a convenient cover for political barbarism.

It is easy to become concerned over the threat itself particularly in the face of the exaggerated claims made. The truth is that the threat looks great on paper and evaporates in the face of human reality. To understand were this is all going, I suggest that you compare Palestine of 1930 to Palestine of 2012 and Israel of 1930 to Israel of 2012. Capital matters of course and some aspects are unfair, however playing catchup was always an option. Instead we have had decades of Islamist political mastery in the form of decadal dictatorship and general thuggery.

It is utterly impossible to construct a modern society with an authoritarian regime unless the rulers step back from authoritarianism. Nazism hijacked a modern society and was on the way to choking it economically when it fell. Communism succeeded after engaging in a huge capital build out to maximum putative capacity to then choke in its own waste. The Islamists cannot even do that much.

The good news is that the forces of modernism inside the Arab world are now fully aware of just what to expect and foremost is the military itself. The military can separate itself from the political component and simply sit back and steal to their heart’s content knowing full well that the Islamists need to make the country rich in order to entertain foreign adventures. Right now they see plenty of advantage in letting the thugs run for awhile until they over step, at which point the military can step back in to reclaim democracy. Enemies are identified and neutralized in the process.

The problem of course is that two dead hands are then on the economy.

In short, I am expecting Islamism to now be ground up internally and totally discredited. Recall that no economically successful Islamist society has ever existed and we have many examples of successful societies reduced to even barbarism by Islamism.

In time, and we now have time, a strengthening secular society peopled by five billion people will simply confront the remnants and impose reform and change. It may not be overly nasty even simply because of the imbalance of power.

Islamists Have the Keys to the Arab World

It’s possible that in the coming years the Arab masses will revolt against their new Islamic rulers. But today, the Muslim Brotherhood, the Salafis, the Wahhabis and all the other followers of the Koran have the keys of the Arab world.

The new president of Egypt, Mohammed Morsi, is a pious revolutionary whose message has always been very simple: “Islam is the solution.” The real Egyptian people were not the secularists described by hypocritical Western journalists based in Tahrir Square. Instead, they are the people revealed in a recent Pew poll: 54% believe men and women should be segregated in the workplace; 82% believe adulterers should be stoned; 84% believe apostates from Islam should face the death penalty; 77% believe thieves should be flogged or have their hands cut off. That’s why the new Islamic rulers will try to impose the veil on women, ban alcohol and attack the cold peace with Israel. That’s why the most important Arab country will move toward a theocratic anti-Western scenario.

The Muslim Brotherhood isn’t seeking power; they want to change society and the individual in the name of a totalitarian ideology. They have waited 80 years to seize the power, while their worldview was forged in the Arabian desert 1,300 years ago. To become a “Brother,” an Ikhwan, one must pass through eight years of training. It’s like joining Heinrich Himmler’s SS. And like the Hitlerist special forces that were at war with Judaism, cosmopolitism, communism and democracy, the Islamic Brothers are at war with individualism, modernism, consumerism, materialism, tolerance, subjectivism, rationalism, paganism, Judaism and Christianity. Like the SS, the Brothers divide reality into light and darkness, spirit and matter, Islamic and non-Islamic. French philosopher Christian Godin wrote that Islamism is far more dangerous than either Nazism or Communism, since the latter, despite their genocidal follies, presupposed their own preservation. For the Hitlerists, the “inferior race” does not deserve to exist; for the Stalinist, the “enemy of the people” does not merit to continue living; for the Islamist, it is the world itself that does not deserve to exist.

Islamists will take into account tourism and jobs. But on top of their agenda is the Koran, not Egypt’s gross national product. They want to build a haven for Muslim bearded men, which will turn out to be a hell for women, Jews, Christians, unbelievers, atheists, converts and all the free men and women. More and more Copts will leave the country, walking in the streets of Cairo will become increasingly dangerous and the border with Israel will be open to rockets, salafism and beheaders.

One year ago the Muslim Brotherhood’s supreme guide, Mohammed Badie, proclaimed: “We will continue on the path of Qutb.” Few “experts” understood the deep meaning of this statement. The stories about the suffering of Qutb in Egyptian prisons are a kind of dark mythology of Islamism. Qutb was held for hours in a cell with dogs snarling while being beaten during rounds of questioning. Badie was his cellmate. Qutb managed to get his manifesto, “Milestones,” smuggled out of jail. It’s the “Mein Kampf of Islamism.” The text circulated clandestinely for years and was later banned.

Qutb’s disgust for the “degenerate” West does not stop with women or jazz music, which he claimed was “created by Negroes to satisfy their love of noise and to whet their sexual desires.” Qutb vilified the Jews as “slayers of the prophets” and as “perfidious,” double-dealing and “evil.” Qutb was hung on August 29, 1966, after the dawn prayer. It was a martyrdom which planted deep roots in the Arab soul.

Qutb had written that the only way to get rid of “corruption” is the imposition of a “just rule” at war with modernity, human rights, promiscuity, materialism and Zionism. Like Adolf Hitler, Qutb was a dark man, humorless, intense and rigid. Like Hitler, Qutb turned his sexual frustration into a fanatic virtue. Like Hitler’s Aryanism, Qutb heralded the notion that Islam is superior. Like Hitler, Qutb saw the existence of the Hebrew people as the measure of the world’s moral bankruptcy.

After six decades of Arab kleptocracy, the Middle East is going to be engineered according to Qutb’s nightmare. Symbols help to understand the mindset. That of the Muslim Brotherhood is a Koran and two sharp swords. In 2005 they published a map of the world. In the center is a green area, the color of Islam. In a lower panel it said: “One hundred years from now,” with the field completely green.

The Nazis called it “Lebensraum.” The Islamists call it “Caliphate.”