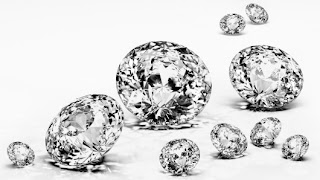 It seems that a suspension of elemental carbon will work just as well while suffering the same difficulties in handling and manufacture.  So while we are unlikely to find industrial microdiamonds in our laundry, it is likely high time we reprised work that I was involved in twenty years ago with suspensions of elemental carbon.

One commonly discussed topic in this blog happens to be biochar in which the powerful crystalline acidic nature of elemental carbon is applied.

This is yet another appearance of the same results in a different setting.  The real problem is to separate a five nm fraction in the first instance.  In the meantime we discover that a lighter oil can be used to suspend the particle seed which then steps aside to allow the seed to interact with the denser oil.  This explains why it was efficious in creating nm sized bubbles of hyaluronic acid which is a large molecule to begin with.

Neat stuff just waiting for us to perfect manufacturing technology.

Diamonds in your washing machine can make your clothes sparkle (Photo:Shutterstock)

We all do laundry, or are perhaps lucky enough to have someone who does laundry for us. Most of that wash is done in warm or hot water, because, regardless of the claims made for laundry detergents, most detergents don't work very well in cold water. Unfortunately, the wash water has to be heated, and given an average wash temperature of about 40°C (104°F), this uses around 5-10 kWh per load. If both the temperature of the water and the amount of water used in clothes washing could be cut in half, nearly a trillion kilowatt-hours of energy could be saved each year - 0.5% of the world's total energy use. All that is stopping us is finding better laundry detergents. That's where the diamonds come in.

The chemical engineering challenge presented by a load of wash is considerable. An average load of laundry contains 40-120 grams (1.4-4.2 oz) of dirt. This dirt is a witch's brew of proteins, carbs, starches, hydrocarbons, fats, minerals, clay, and other schmutz, mashed between and within the fibers of the various fabrics. Nearly all of this material is hydrophobic, that is, it actively repels water because it has lower surface energy than does water. (An alternate term is lipophilic, as the dirt is oil-like and is attracted to more oil.) So how do we get this hydrophobic dirt suspended in the wash water so it can be removed by draining and rinsing? This is the task of the laundry detergent. 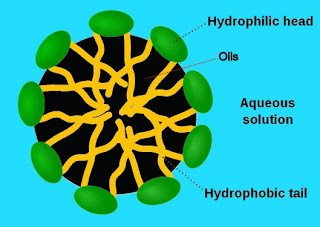 Chemical structure of soap - the left end has the structure of an oil, while the right end has a structure that is attracted to water (Image: Smokefoot)

A basic detergent is also known as a surfactant. A surfactant is typically an organic molecule that has two separated chemical groups, one of which is hydrophilic, and the other of which is hydrophobic. In the figure above appears the oldest known surfactant - a simple soap. The soap molecule is essentially a linear hydrocarbon with a sodium salt at one end.

Schematic structure of a micelle. The hydrophilic end of the surfactant molecules rest in contact with the aqueous solution surrounding the micelle, while the hydrophobic (or lipophilic) chains remain in the oil droplet enclosed by the micelle (Image: Emmanuel Boutet via Wikimedia)

When a surfactant is put in water and mechanically mixed with oil, the oil is taken up in micelles, as shown in the figure above. The surface of the micelles are happy in contact with water, so the oil can be separated into tiny droplets (perhaps 10-20 nm in size). Moreover, these micelles do not allow the oil to conglomerate into larger droplets, so that the oil remains suspended in the water. Removing the wash water and rinsing the laundry then removes most of the dirt.

A real laundry detergent includes more sophisticated surfactants than soap, usually so that they work better in hard water. In addition, laundry detergents are usually about 50 percent water softeners, chemicals added to remove calcium ions from the wash water. They may also include bleach, enzymes (to help degrade caked dirt so it can be solubilized), foaming agents, dye transfer inhibitors, fragrance, and many other additives.

Detergents do a remarkably good job with a very complex chemical process. However, most conventional detergents do not work well in cold water. The most difficult ingredients of the dirt to solubilize with detergents are crystallized fat and other lipid molecules - not too surprising, as we know grease sticks well to grease. Professor Andrew Marsh and his team at the decided to take on this problem.

They came up with the apparently crazy idea to add diamonds to laundry detergent to improve its cold washing ability. But let's dig down to discover why this approach isn't as silly as it might seem at first glance.

First, a key step in diamond mining as well as manufacture of synthetic diamond is to separate diamonds from the gangue (waste material) by passing the diamond-containing material over a grease table. The surfaces of a diamond are highly hydrophobic, so the diamonds stick to the grease. This is why jewelry stores have ultrasonic cleaners, to gently scrub away at the greasy surface of a diamond. So the notion that including diamonds in the laundry process might change how the crystallized fat reacts to the presence of the detergent has some rationale.

Second, industrial diamonds are not nearly as expensive as you might think. A gem-quality one-carat diamond (weighing 0.2 grams/0.007 oz) can easily cost US$10,000. In contrast, industrial diamond grit in large quantities can cost as little as four or five cents per carat, or about $200 per kilogram (2.2 lb). The concentration settled upon by March's team was 0.1 g/liter (0.003 oz/0.26 gal US) of washing water (about 0.0025 percent by volume), which would only add a US dollar or so to an average load of laundry. 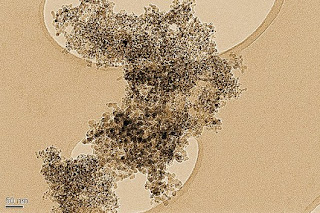 Third, one might suspect that such a small amount of diamond could not have any noticeable effect on the washing process. This is one reason that Marsh's team studied the effect of adding five nanometer nanodiamonds. At 0.1 g/l, the average distance between individual nanodiamond crystallites is about 200 nm. When one considers that the nanodiamonds will largely concentrate near the worst dirt in the clothing, you can imagine that the surface regions of crystallized fat will be well covered by nanodiamonds.
But wait - there's an obvious problem here. As the nanodiamonds are hydrophobic, how can they be well dispersed in the water-based washing liquid? They should agglomerate into larger clusters of nanodiamonds, and eventually settle out of the liquid, or at the very least become too sparse to affect the washing process. This concern is valid, and is avoided by initially forming a colloid which places surfactant molecules on the surfaces of the nanodiamonds. The surfactant molecules self-assemble so that their hydrophobic groups are attached to the nanodiamond surfaces, and their hydrophilic groups are exposed to the surrounding water. The result is that the nanodiamonds retain their individual identities and remain in suspension in the water.

The result? The amount of fat removed during a given washing test using the detergent with nanodiamonds was double that when using the detergent alone. At this point it isn't clear that we will soon be buying laundry detergent containing nanodiamonds. However, Marsh's research may prove a starting point for a more practical improvement. In any case, it is stimulating to encounter a research project so effective at rubbing one's nose in the extraordinary complexity of ordinary activities.

From an early age Brian wanted to become a scientist. He did, earning a Ph.D. in physics and embarking on an R&D career which has recently broken the 40 year anniversary. What he didn't expect was that along the way he would become a patent agent, a gourmet cook, a biotech entrepreneur, an opera tenor and a science writer.

Brian,
You said 5 nm diamonds are fairly cheap.
I wonder if you could give a few links to sites selling these diamonds relatively inexpensively?