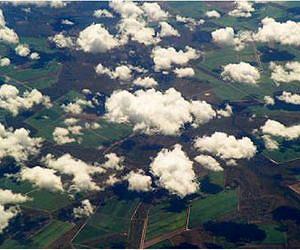 In fact this suggests that dust particles are actually slow to grab moisture. I wonder if they can be charged somehow to speed up the process? In fact what is the relationship of charging to water droplet formation?

What this suggests is that the process is far more sensitive than thought.

Are some trees expressing complex organics along with transpired water? Does this affect droplet formation?

We already know that cosmic rays have an effect plausibly by changing charge on a water droplet and inducing it a attach to another droplet. A charged dust particle would naturally stack up water droplets because such a charge would not be released easily.

In any case, this item shows that the whole topic is barely explored at all.

Exploring one of climate's 'known unknowns'

One of the most significant 'known unknowns' is how quickly water can condense on the small aerosol particles to grow and become cloud droplets, influencing the albedo (reflectivity) of clouds and cloud lifetime (precipitation).

The influence of aerosols (small particles less than 1 micrometre in diameter) and clouds (liquid droplets 1 - 1000 micrometres diameter) represents one of the largest uncertainties in our understanding of trends in past global climate and predicting future climate change, as recognised by the 2007 report of the Intergovernmental Panel on Climate Change.

One of the most significant 'known unknowns' is how quickly water can condense on the small aerosol particles to grow and become cloud droplets, influencing the albedo(reflectivity) of clouds and cloud lifetime (precipitation).

In a study published in PNAS, Professor Jonathan Reid of the University of Bristol and colleagues show that the rate of cloud droplet growth can be strongly dependent on the composition of the aerosol.
For aerosol particles that have high viscosity (equivalent to saying they behave like treacle or even bitumen), water evaporation and condensation can be very slow, taking many hours.

For particles that are much less viscous (more like olive oil or even water), evaporation and condensation can be very fast: less than 1 second.