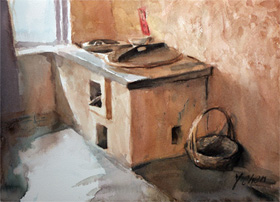 If ever there is a simple government mandate that is clearly and immediately beneficial gto the government itself it is the outright distribution of safe cooking stoves of some form. The USA and Canada was built on flat topped wood burners that carried of gases through stove pipes. They easily handled coal when it was available and reduced most trash before it really became a problem. Of course it normally included an oven and sometimes a doubtful water tank.

My point is that it worked and kept that one room warm while doing a great job.

The main tool is the stove pipe. Whatever is rigged up beneath it must escape its gases and nothing is more important. A grass thatched mud hut becomes pleasant with a stove pipe and a hood over an open flame.

Plenty of effort is now going into getting this all right for more tropical conditions and this item tells us just how important it happens to be. And what holds true in China, also holds true for two billion others around the world.

http://www.eurekalert.org/pub_releases/2012-07/aiop-jor070212.php
Despite China's booming economy, many poor individuals continue to use traditional stoves that burn low-grade solid fuels like charcoal and coal. Such stoves generate high levels of indoor air pollution that cause dire health problems, especially in women and children. These health concerns include asthma, bronchitis, and heart disease. By 2030, a new study predicts, nearly a quarter of the rural population and one-sixth of city dwellers could still be using such stoves. However, with a relatively small per capita investment, the study suggests, those values could drop to zero.

The study, led by Brijesh Mainali of the Royal Institute of Technology in Stockholm, Sweden, appears in a special issue of the American Institute of Physics' Journal of Renewable and Sustainable Energy (JRSE) that focuses on emerging energy trends in China.

Mainali, who has been working in the field of rural energy for the past 15 years, along with senior researcher Shonali Pachauri and researcher Yu Nagai – both from the International Institute for Applied Systems Analysis in Vienna, Austria – modeled cooking fuel and stove choices in both rural and urban Chinese populations. Choices were modeled to depend on standard economic variables such as income, technology costs, and fuel prices, along with some variables unique to developing countries such as inconvenience costs.

The analysis revealed that, under a business-as-usual scenario, 24 percent of the rural and 17 percent of the urban population might still depend on solid fuels in 2030. For an annual cost of just $2.39 per person, the researchers found, universal access to modern fuels could be achieved by that date in urban areas. Providing such fuels to rural areas would cost substantially more – an estimated $10.75 per person – but, Mainali notes, "the associated reductions in the adverse impacts on health and emissions of greenhouse gases, as well as general improvements in socio-economic welfare that are likely to accompany any access policies, justify such investment." Once there is access to modern fuels, he says, "the change that it brings to lives and society also changes prosperity levels and thus, in the long run, the required subsidies could be phased out or reduced."

Title: "Analyzing Cooking Fuel and Stove Choices in China Till 2030"