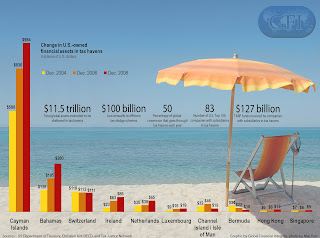 Of course, the real value is the gross three to five percent revenue stream that these assets represent. I get weary of writers who point to the largest imaginable number and thus misstate the actual economic impact. On top of it all these assets are paying their full share in the countries in which they operate.

The real problem is the economic idea of providing large pools of capital to anyone in the hope that he will trickle down the money. It never worked that way. The problem at that level is to secure the revenue stream away from confiscation. Thus we have offshore placement of ownership. Of course kleptocracies get out of hand and their piece of the action simply becomes uneconomic to the point of choking economic activity.

The romance is now fading and governments will soon learn how to bring run away capital to heel since the historical beneficiaries are now dying out. What first has to happen though is a universal global tax code that simply ends the problem that cannot be manipulated. This is a pretty good place to begin the creation of global governance itself. However we still fail to properly understand taxation and economic policy and that is also needed.


The "super-rich elite" are hiding more than $21 trillion US in tax havens around the world, an amount roughly equal to the combined GDP of the United States and Japan, according to a new report.

Commissioned by the Tax Justice Network, an independent British organization, the report is said to be the most comprehensive ever done concerning what it calls the “offshore economy.”

Researched and written by James Henry, an expert on tax havens, the report states the hidden money could be as large as $32 trillion, and represents a massive black hole in the world's economy.

The amount of tax income lost "is large enough to make a significant difference to the finances of many countries,” Henry noted.

Hidden money from elites living in developing countries is "enough to make a significant difference to the finances of many countries... that are now struggling to replace lost aid dollars and pay for climate change. Indeed, once we take these hidden offshore assets and the earnings they produce, 'debtor countries' are in fact revealed to be wealthy," he said.

UBS, Credit Suisse and Goldman Sachs are the three private banks handling the most assets offshore
92,000 people, or 0.001 per cent of the world’s population, hold $21 trillion in hidden assets

Henry, who collected data from the International Monetary Fund (IMF), the World Bank and the Bank of International Settlements, said the figure he came up with is conservative because it doesn’t take into account property like yachts or other physical assets.

"These estimates reveal a staggering failure: inequality is much, much worse than official statistics show, but politicians are still relying on trickle-down to transfer wealth to poorer people," said John Christensen of the Tax Justice Network.

Taxation is a disgrace to the human race. It is the cause of war and most human suffering as we vote to steal from one another and fight for access to the public treasuries. One group of people trying to take the rights of others, all in the name of the public good; an irrational guess at what you think your neighbor needs or what you do not want to be responsible for yourself. Taxation is legalized theft, extortion or coersion and those that do not understand this, get what they desire. Government is a scam, always was and always will be. How many more centuries have to go by and how many more wars to we have to go through, until we learn from history?????

taxation is how governments control the wealth and abilities of their people.If your property is taxed they control it .school districts are taxing without any control over their failed policy and driving up the cost of home ownership while failing to educate .A tuition income tax is a good alternative and it would eliminate all districts and replace it with one state district that would save enough money to add 4 years of college to public education.Income taxes are to pay for government and without that we would have a uncivilized world still waring with each other on a even more daily basis and locally.