IPCC Admits Its Past Reports Were Junk 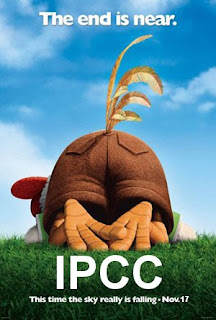 After brazening it out for the past two years, we finally have capitulation and vigorous sweeping of the material under the carpet. The bottom line is that all past IPCC reports are fatally flawed and need to be approached with caution. Individual papers will need to be considered on their own merits and the general conclusions drawn need to be simply set aside as unacceptable.

In the meantime IPCC continues to pay all those nice folks who brought all this to you and a couple of scholars struggle to retain whatever prestige and position they have left. The only good that has come forth is that those who challenged this phoney consensus have seen their reputations burnished whatever their qualifications. A few wrongs may even have been righted.

Most important, the political types have all fled the field and science is back to been science while having to combat increased skepticism which I consider quite healthy.

IPCC Admits Its Past Reports Were Junk

On June 27, the Intergovernmental Panel on Climate Change (IPCC) issued a statement saying it had "complete[d] the process of implementation of a set of recommendations issued in August 2010 by the InterAcademy Council (IAC), the group created by the world's science academies to provide advice to international bodies."

Hidden behind this seemingly routine update on bureaucratic processes is an astonishing and entirely unreported story.  The IPCC is the world's most prominent source of alarmist predictions and claims about man-made global warming.  Its four reports (a fifth report is scheduled for release in various parts in 2013 and 2014) are cited by the Environmental Protection Agency (EPA) in the U.S. and by national academies of science around the world as "proof" that the global warming of the past five or so decades was both man-made and evidence of a mounting crisis.

If the IPCC's reports were flawed, as a many global warming "skeptics" have long claimed, then the scientific footing of the man-made global warming movement -- the environmental movement's "mother of all environmental scares" -- is undermined.  The Obama administration's war on coal may be unnecessary.  Billions of dollars in subsidies to solar and wind may have been wasted.  Trillions of dollars of personal income may have been squandered worldwide in campaigns to "fix" a problem that didn't really exist.

The "recommendations" issued by the IAC were not minor adjustments to a fundamentally sound scientific procedure.  Here are some of the findings of the IAC's 2010 report.

The IAC reported that IPCC lead authors fail to give "due consideration ... to properly documented alternative views" (p. 20), fail to "provide detailed written responses to the most significant review issues identified by the Review Editors" (p. 21), and are not "consider[ing] review comments carefully and document[ing] their responses" (p. 22).  In plain English: the IPCC reports are not peer-reviewed.
The IAC found that "the IPCC has no formal process or criteria for selecting authors" and "the selection criteria seemed arbitrary to many respondents" (p. 18).  Government officials appoint scientists from their countries and "do not always nominate the best scientists from among those who volunteer, either because they do not know who these scientists are or because political considerations are given more weight than scientific qualifications" (p. 18).  In other words: authors are selected from a "club" of scientists and nonscientists who agree with the alarmist perspective favored by politicians.

The rewriting of the Summary for Policy Makers by politicians and environmental activists -- a problem called out by global warming realists for many years, but with little apparent notice by the media or policymakers -- was plainly admitted, perhaps for the first time by an organization in the "mainstream" of alarmist climate change thinking.  "[M]any were concerned that reinterpretations of the assessment's findings, suggested in the final Plenary, might be politically motivated," the IAC auditors wrote.  The scientists they interviewed commonly found the Synthesis Report "too political" (p. 25).

Really?  Too political?  We were told by everyone -- environmentalists, reporters, politicians, even celebrities -- that the IPCC reports were science, not politics.  Now we are told that even the scientists involved in writing the reports -- remember, they are all true believers in man-made global warming themselves -- felt the summaries were "too political."

Here is how the IAC described how the IPCC arrives at the "consensus of scientists":

Plenary sessions to approve a Summary for Policy Makers last for several days and commonly end with an all-night meeting.  Thus, the individuals with the most endurance or the countries that have large delegations can end up having the most influence on the report (p. 25).

How can such a process possibly be said to capture or represent the "true consensus of scientists"?

Another problem documented by the IAC is the use of phony "confidence intervals" and estimates of "certainty" in the Summary for Policy Makers (pp. 27-34).  Those of us who study the IPCC reports knew this was make-believe when we first saw it in 2007.  Work by J. Scott Armstrong on the science of forecasting makes it clear that scientists cannot simply gather around a table and vote on how confident they are about some prediction, and then affix a number to it such as "80% confident."  Yet that is how the IPCC proceeds.

The IAC authors say it is "not an appropriate way to characterize uncertainty" (p. 34), a huge understatement.  Unfortunately, the IAC authors recommend an equally fraudulent substitute, called "level of understanding scale,[surely they are kidding]" which is more mush-mouth for "consensus."

The IAC authors warn, also on page 34, that "conclusions will likely be stated so vaguely as to make them impossible to refute, and therefore statements of 'very high confidence' will have little substantive value."  Yes, but that doesn't keep the media and environmental activists from citing them over and over again as "proof" that global warming is man-made and a crisis...even if that's not really what the reports' authors are saying.

Finally, the IAC noted, "the lack of a conflict of interest and disclosure policy for IPCC leaders and Lead Authors was a concern raised by a number of individuals who were interviewed by the Committee or provided written input" as well as "the practice of scientists responsible for writing IPCC assessments reviewing their own work.  The Committee did not investigate the basis of these claims, which is beyond the mandate of this review" (p. 46).

Too bad, because these are both big issues in light of recent revelations that a majority of the authors and contributors to some chapters of the IPCC reports are environmental activists, not scientists at all.  That's a structural problem with the IPCC that could dwarf the big problems already reported.

So on June 27, nearly two years after these bombshells fell (without so much as a raised eyebrow by the mainstream media in the U.S. -- go ahead and try Googling it), the IPCC admits that it was all true and promises to do better for its next report.  Nothing to see here...keep on moving.

Well I say, hold on, there!  The news release means that the IAC report was right.  That, in turn, means that the first four IPCC reports were, in fact, unreliable.  Not just "possibly flawed" or "could have been improved," but likely to be wrong and even fraudulent.

It means that all of the "endorsements" of the climate consensus made by the world's national academies of science -- which invariably refer to the reports of the IPCC as their scientific basis -- were based on false or unreliable data and therefore should be disregarded or revised.  It means that the EPA's "endangerment finding" -- its claim that carbon dioxide is a pollutant and threat to human health -- was wrong and should be overturned.

And what of the next IPCC report, due out in 2013 and 2014?  The near-final drafts of that report have been circulating for months already.  They were written by scientists chosen by politicians rather than on the basis of merit; many of them were reviewing their own work and were free to ignore the questions and comments of people with whom they disagree.  Instead of "confidence," we will get "level of understanding scales" that are just as meaningless.

And on this basis we should transform the world's economy to run on breezes and sunbeams?

In 2010, we learned that much of what we thought we knew about global warming was compromised and probably false.  On June 27, the culprits confessed and promised to do better.  But where do we go to get our money back?


Read more:
http://www.americanthinker.com/2012/07/ipcc_admits_its_past_reports_were_junk.html#ixzz20uFlOdnv
Posted by arclein at 12:00 AM

Site the source at the top and save anyone reading this some time.

What a great post. I’m emailing this to my friends.