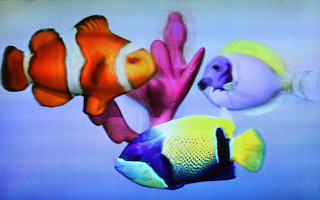 This outlines the next phase of 3D imagery which can be operated from a LCD platform. It is technically doable with the advent of a somewhat faster refresh rate and using a well established methodology. It is not Holodec quality yet but it is glasses free and certainly a large improvement.

What it means is an effective home 3D protocol will be here inside the next couple of years as it naturally driven by consumer demand along with rapidly dropping prices. It is also a natural upgrade for the industry that replaces the present stock in its entirety. Just when you thought that HD flat screen was good enough for a few years.

It certainly will be good enough for the in home flat screen market and even welcome. 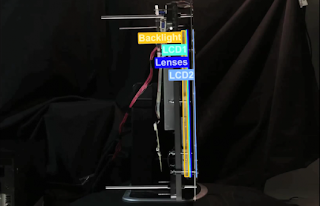 Though 3D movies have been around for a while, the experience of visiting a cinema to catch the latest blockbuster is dampened by unwieldy glasses and the limitation of only one fixed perspective being offered to all. The illusion of depth is present, but this is far removed from the hologram-like, multiple-perspective experience which would truly wow movie-goers. MIT's Media Lab’s Camera Culture group proposes a new approach to 3D images that promises glasses-free multiple-perspective 3D. Perhaps best of all though, MIT's technique uses inexpensive existing LCD technology, clearing the way for the tech to be implemented into TV's.

“Holography works, it’s beautiful, nothing can touch its quality,” enthused Douglas Lanman, a postdoc at the Media Lab. “The problem, of course, is that holograms don’t move. To make them move, you need to create a hologram in real time, and to do that, you need … little tiny pixels, smaller than anything we can build at large volume at low cost. So the question is, what do we have now? We have LCDs. They’re incredibly mature, and they’re cheap."

In order to understand the MIT-based team’s proposal, it’s useful to consider the Nintendo 3DS. The 3DS sports a glasses-free 3D display which provides an illusion of depth made possible by a relatively simple process: in the top screen, two layered LCD screens display two slightly offset images which represent each perspective of the user's eyes. Meanwhile, the bottom screen merely shows alternating dark and light bands in order to ensure each eye sees only the image intended for it. A limitation to Nintendo's console is that users must keep their gaze in a fixed position to experience the 3D effect.

Researchers at the Media Lab Camera Culture group reasoned that they could take the principles utilized by Nintendo still further. By tailoring the patterns displayed on the top and bottom screens to each other, the team was able to filter the light emitted by the display in a more sophisticated way and thus create an image that would alter with varying perspectives. Dubbed HR3D, the project appears to be independent to the other MIT-based holographic television project we previously reported on.
Reducing the hertz

The researchers first calculated that for the HR3D to offer convincing multiple-perspective 3D, the screen used would be required to flicker ten times for every frame of 3D video, pushing said screen up to an impractical 1,000 Hz refresh rate. But by combining two LCD screens in unison, the Media Lab team was eventually able to get the required refresh rate for convincing multiple-perspective 3D down to a more realistic, but as yet still unattainable, 360 Hz.

This solution brought its own problems though, as using two LCD screens in unison increases the complexity of calculating the required patterns, so the team then turned to computed topography (CT) technology that is used in medical imaging. It turns out that the computation involved in CT technology is very similar to the math that the MIT Media Lab Camera Culture group is dealing with.

“The way I like to think about it is, we’re building a patient whose CT scan is the view,” said Lanman.

Once the numbers were crunched with the help of CT technology, a display was produced that approaches the experience of a true moving hologram. Until an LCD display is able to offer refresh rates of 360 Hz, the existing limit of 240 Hz is ample for proving the possibilities of the project. Since LCD's have doubled from 120 Hz to 240 Hz in recent years, it's entirely possible that 360 Hz will be available soon.

At this year's Siggraph computer-graphics conference, the Media Lab researchers will demonstrate two prototype displays: one which uses three LCD panels and another which employs just two panels. To widen the viewing angle of the display, the latter places a sheet of lenses developed for stereoscopic display systems that refract light left and right in between the pair of LCD panels. With the three-panel prototype, the 3D illusion offered is consistent within a viewing angle of 20 degrees, but the refractive-lens prototype can offer viewing angle of 50 degrees.
HR3D is still very much in the development stage at this point and there's significant work to be done before we see multiple-perspective 3D TV in our homes, not to mention the fact that the relevant LCD technology still needs to be created. That said, should the HR3D prove as cost-effective and technologically feasible as these experiments suggest, awe-inspiring home TV setups could indeed become commonplace in the near-future.

The video below further details the approach taken by the Media Lab team.