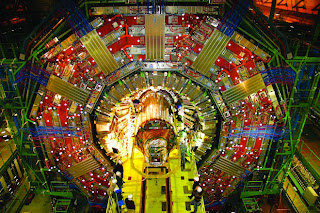 The problem with so called modern physics which is a little much after decades and decades of human effort is that it lacks an effective model of a fundamental particle that can be manipulated mathematically in order to ask and answer key questions. We have accepted such exists implicitly as there is little real choice. Our empirical results help describe a derivative geometry at the scales which we have so far been able to use. So far, so good. We even call the melange of resultant product particles fundamental particles. The real problem is that they are at least a thousand times bigger than a neutrino which looks pretty good to be our elusive fundamental particle.

Aside: the problem with Relativity was that it lacked a metric that was able to handle the observed particle universe. All it had was the good old Pythagorean. I corrected that omission in my paper published in AIP's Physics Essays in June of 2010 and introduced higher ordered Pythagoreans.

And of course we are trying to measure a thumbtack by throwing stones at it from a hundred yards and listening to the noise.

Thus: assumption 1 – The neutrino is the fundamental particle in its various presentations. It continues to look good as present empirical results are roughly congruent with my theoretical expectations.

Thus: problem 1 – Model the neutrino as a mathematical object that we can manipulate. This was not a trivial thought experiment and took two insights. It is enough to know it can be done.

Curiously I actually have a creditable solution to this problem and it drives a new cosmology that I will be calling Cloud Cosmology to replace the antiquated and creaky Big Bang. The model provides a perfect framework to construct the observed empirical particle world in a simulator. Our technology is almost up to the task of doing some neat stuff in this direction. And yes ladies, it will be known as the Theory of Everything in its time. For the curious, Dark Matter also becomes obvious and important.

I love writing this stuff on the front page knowing that absolutely no one has any capacity to understand what I just said and if they do I want to talk to them anyway. I am not surrounded by a crowd of grad students to help speed things out into the aether.

In the event geometry is throwing up a Higgs particle and apparently we will shortly have confirmation. Maybe it is time to go back and now do it right.

How the Discovery of the Higgs Boson Could Break Physics


http://www.wired.com/wiredscience/2012/07/higgs-boson-breaks-physics/
If gossip on various physics blogs pans out, the biggest moment for physics in nearly two decades is just days away. The possible announcement on July 4 of the long-sought Higgs boson would put the last critical piece of the Standard Model of Physics in place, a crowning achievement built on a half-century of work by thousands of scientists. A moment worthy of fireworks.

But there’s a problem: The Higgs boson is starting to look just a little too ordinary.

As physicists at Europe’s Large Hadron Collider prepare topresent their latest update in the hunt for the Higgs boson — the strange particle that exists everywhere in space and interacts with all other elementary particles, giving them their mass — other physicists are preparing for disappointment.

That’s because scientists have been secretly hoping all along that, when they finally found the Higgs, it would be an interesting particle with unexpected behaviors — even somewhat unruly. A perfectly well-behaved Higgs leaves less room for new, exciting physics — the kind that theorists have been wishing would show up at the LHC.

The current situation has some physicists starting to worry and, if coming years fail to turn up interesting results, the field could be headed for a crisis.

Since the mid-20th century, particle physicists have been developing a theory known as the Standard Model, which accounts for all the known forces and subatomic particles in the universe. While this model has proven time and time again to be extremely good at predicting particles and forces that were later discovered experimentally, it is not the final theory of everything. The Standard Model still has various problems that stubbornly refuse to cooperate. 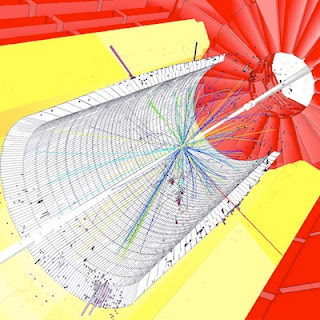 
Simulated particle collision events in the CMS experiment that would indicate the presence of supersymmetry. CMS collaboration/CERN

The tricky part is that the LHC, in addition to searching for the Higgs, has also been looking for these heavy supersymmetric superpartners. But thus far, nothing is showing up. Furthermore, all indications are that scientists will find that the Higgs weighs 125 gigaelectronvolts (GeV) – or about 125 times more than a proton – which means that it sits exactly where the Standard Model expected it to be.

Great news for the troublesome Standard Model, not so much for its savior, supersymmetry.

Supersymmetry was first proposed in the 1960s and developed seriously during the heyday of particle physics in the 1970s and ‘80s. Back then, large particle accelerators were smashing subatomic particles together and discovering a slew of new bits and pieces, including quarks and the W and Z bosons. Supersymmetry was put forth as an extension of the Standard Model, but the predicted particles were out of reach for atom smashers of that era.

Before the LHC was up and running in 2010, many physicists were hopeful that it would uncover some evidence for supersymmetry. Despite a few promising results, experimental confirmation of the idea keeps failing to show up.

This has a few in the community beginning to seriously doubt their darling supersymmetry will ever be a viable theory.

“It’s a beautiful theory, and I would love it if it were true,” said particle physicist Tommaso Dorigo, who works on one of the LHC’s two main experiments. “But there is not any compelling evidence.”
For two decades, people have been claiming the supersymmetry results were just a few years away, Dorigo added. So as those few years kept coming and going with no results, physicists have tried explaining the non-appearance of these particles by making additions and elaborations to supersymmetry.

Already, the simplest versions of supersymmetry have been ruled out and a Higgs boson at 125 GeV could require even more changes, making many physicists nervous, Csaki said. Tweaking the theory to explain why even the lightest of the predicted superpartners haven’t shown up destroys some of supersymmetry’s beauty, he said.

For instance, one of the best aspects of supersymmetry is that many of its extra subatomic particles make excellent dark matter candidates. Altering supersymmetry could get rid of these potential dark matter particles, and further changes might make the theory even less useful.

“One day we may just look at it and ask if this is still the theory that we’re in love with,” Csaki said.

Of course, all is not yet lost. The LHC is still smashing particles together and, over the next few years, it will do so at higher and higher energies, perhaps finally bringing supersymmetry to light. While the accelerator will be shutdown in 2013 for repairs, 2014 and 2015 will have the machine running at its top capacity.

“If after two years of running at high luminosity at the LHC they don’t see anything, we will be out of ideas of the conventional sort,” said Csaki. “We will be in some kind of crisis.”

While troubling, this situation doesn’t bring physics to a grinding halt. The Standard Model still has holes in it, and something needs to account for the dark matter and energy in the universe. Alternative theories to supersymmetry exist. Some require additional forces in nature, new interactions among particles, or for the Higgs boson itself to be composed of simpler pieces.

“However those models have their own problems to be a consistent models of nature,” wrote particle physicist Rahmat Rahmat from the University of Mississippi, who also works on the CMS experiment, in an email to Wired.

As yet, supersymmetry is still the front-runner for theories beyond the Standard Model and most physicists remain optimistic for its prospects.

“I’m really hopeful that besides the discovery of the Higgs, we will also soon see something else,” said Csaki.