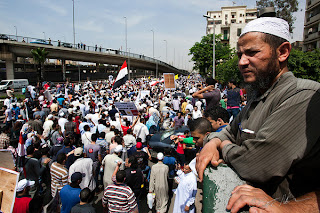 The first reality that we all need to come to grips with is that an Islamic society is Islamic.  It is not naturally Islamist just as was not naturally Nazi.

After all that we need to recall our well earned faith in democratic process however much the pundits gnash and wail.  I will admit that I too occasionally suffer lapses.  Yet history happens to be a stunning affirmation of the true power of democracy itself  in persistently ordering society.

The difficulty has been that it takes generational time for a population to master the art and to educate itself.  Today many societies are well on the way and we are often accepting new countries into the process itself.  The most recent is .

All such transitions are of course tentative and nervous and often nasty as the society works out historical contradictions.  Recall today just how quiet the Balkans have become.

Whatever our natural doubts about the the process will be between Islamic peoples and serious historical contradictions are on the chopping block.  That may include a cleansing of radical Islamists.  Regardless these types of factions will be neutered by democratic process.

The real difficulty that will take time to address is internal social freedom as determined only recently in the past two centuries.  This includes freedom of religion and speech and equality of women.  Understandingly, these are on the back burner while they figure out how to change leadership and legislate without killing half the population.

The fact is that all are voting and the pressure is surely on and we can expect an accelerated transition although it is still generational.

At the present, is shooting its way into democracy.  When exhausted or even defeated on the battlefield, the present dictatorship will succumb and another demos will arise.

Once settled, I suspect another state will erupt and the same process will repeat itself simply because no one has actually successfully beaten off the population.  The lesson is well learned and Iranians now know that it is a matter of toughing it out.  They have already had a couple of false starts and today the elite have no support.  The outright collapse of Iranian Mullah Rule will spell the end of Islamism itself. In the meantime the loss of is a huge blow as it removes its primary tool and conduit.

The good news about last weekend’s election in , as relayed by the Western media, was that the “Islamists” were defeated and the Good Guys won. The real good news was that democracy in the Arab world is still making progress, regardless of whether the voters choose to support secular parties or Islamic ones.

The Libyan election was remarkably peaceful, given the number of heavily armed militias left over from the war to overthrow the Gadhafi dictatorship that still infest the country. Turnout was about 60 percent, and Mahmoud Jibril, who headed the National Transitional Council during last year’s struggle against Gadhafi, won a landslide victory.

Jibril, whose National Forces Alliance was a broad coalition of diverse political, tribal, and ethnic groups, denied that it was a “secular” party— a necessary posture in a deeply religious and conservative society like ’s— but it certainly was not an Islamic party. Yet it won 78 percent of the vote in , the capital, and 58 percent even in the oil-rich east.

The explicitly Islamic parties, the Justice and Development Party (Muslim Brotherhood) and Al-Watan, did far worse than they expected, getting barely 20 percent of the vote in , the big city in the east. But they should not have been surprised.

In to ’s west and to the east, the Muslim Brotherhood was the mainstay of resistance to the dictatorships for decades, and it paid a terrible price for its bravery. It was natural for voters in those countries to reward Islamic parties when the tyrants were finally overthrown. Gadhafi was more ruthless and efficient in crushing all opposition in Libya, and the Muslim Brotherhood had scarcely any local presence.

So Libya gets a “secular” government, while Tunisia and Egypt get “Islamic” governments— but the point is that they all get democratically elected governments, and stand a reasonable chance of becoming countries that respect human rights and the rule of law. Tunisia, indeed, has already made that transition, and Egypt, with one-third of the entire population of the Arab world, is still heading in that direction too.

The relevant question is not whether a party is Islamic; it’s whether it is democratic. The distinguishing feature of the Islamic parties that have emerged in post-revolutionary Arab countries is that they have almost all chosen barely modified versions of the name of Turkey’s ruling Islamic party, the Justice and Development (AK) Party.

The AK party has governed with remarkable success for the past 10 years. The economy has flourished, the army has finally been forced to stop intervening in politics, and you can still buy a beer almost anywhere in .

AK is a socially conservative party, of course, like ’s Christian Democratic Party or the Republican Party (aka the White Christian Party) in the . But like those parties, it respects the constitution, civil rights, and the voters’ choice. It’s hardly surprising that its leader and ’s prime minister, Recep Tayyib Erdogan, was greeted as a hero when he visited shortly after the revolution.

There is no good reason to believe that Islamic parties in Arab countries will behave worse than “secular” parties, any more than we would worry if a “secular” party in Germany were about to lose to a “Christian” party. In fact, the Christian Democratic Party currently leads the coalition government in , and civil rights are still safe.

The Western prejudice against Islamic parties (and local prejudice as well) comes from a confusion between Islamic and “Islamist” groups, the latter being the English word for fanatical groups that reject democracy and advocate violent jihad against infidels and “heretical” Muslims. This confusion, sad to say, is often deliberately encouraged by Western and local interests that really know better, but want to discredit those who oppose them.

It didn’t work in , where the Muslim Brotherhood’s party won both the parliamentary and the presidential elections. This did not please the Supreme Council of the Armed Forces and its allies from the old regime, and they arranged for the Egyptian Supreme Court (whose members were all appointed by the old regime) to dismiss the new parliament on a flimsy constitutional pretext just two days before the presidential election last month.

Then, as the voters were actually casting their ballots, the army also stripped the office of the president of its right to control the armed forces, gave itself the right to impose new laws, and declared that it would choose the group who write the new constitution. It was a coup implicitly justified by the rise of the “Islamic menace”— and some secular Egyptian politicians, disgracefully, have gone along with it.

Egypt’s newly elected president, Mohammad Morsi, has refused to accept the army’s decrees, and a delicate game is underway in Cairo in which he is trying to discredit the soldiers and gradually drive them back into their barracks without risking an open confrontation that could trigger an actual military coup. He will probably win in the end, because the army knows that the masses would promptly be back in if it did try a coup.

And if Egyptians don’t like what their Islamic government does, they can always vote it out again at the next election.

Gwynne Dyer is a London-based independent journalist whose articles are published in 45 countries.