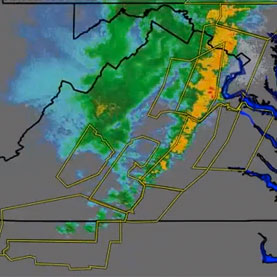 Fortunately these events are rare, although we often forget that the potential violence of a thunderstorm is huge however localized as anyone who has watched a field of grain reduced to a mat by a few inches of hailstones. That event rarely hits more than a square mile but is no fun.

The Derocho is something special and is simply unpredictable except to recognize pending conditions.

The result is a moving thunderstorm front that simply refuses to fade out.

This recent event was huge and will act as a standard to measure other such events against. These conditions have prevailed before but simply not to this extent. Thus we have a new name that is also a warning to batten down.

"Super Derecho" Ambushed Mid-Atlantic before We Knew What One Was

These rare storms feature bands of turbulence that feed on warm, moist air to create a cycle of warming and cooling that can drive itself for hundreds of kilometers

By Nathanael Massey and ClimateWire July 9, 2012


Few denizens of the East Coast were familiar with the term "super derecho" before its hurricane-like winds carved a devastating path through the mid-Atlantic on June 29. It snapped off trees and triggered sprawling power outages as it went.

Since then, the term has become ubiquitous, tossed around easily as news anchors rattle off the storm's mounting toll: 13 dead, more than 2 million without power at the storm's peak and yet-untold billions of dollars in damages.

By now, we know what a super derecho does. But few know what a rare and complex breed of storm it is.

A time-lapse video made from radar images that tracked the destructive path of the June 29 super derecho storm system as it developed over Iowa and gathered strength moving across the Midwest and onto the East Coast. Colors indicate wind speed, with red marking the highest intensity. Video courtesy of Daryl Herzmann and the Iowa Environmental Mesonet. Click to watch the video.

The term was coined in 1888 by a meteorologist named Gustavus Hinrichs. Derived from a Spanish word meaning "direct" or straight ahead," it describes a forward-moving band of turbulent weather that feeds on the warm, moist air in front of it, creating a cycle of warming and cooling that can whip up violent winds and drive itself for hundreds of miles in a single direction.

Only rarely do such phenomena occur, said Daryl Herzmann, an assistant scientist at the Iowa Environmental Mesonet.

"It's a complex interaction of forces, and the environment has to be conducive," he said. "You need a very special setup to get a derecho -- obviously, that was the case [on June 29]."

Recipe for an ugly surprise

First of all, Herzmann said, you need a large reservoir of energy. For weather systems, this ordinarily takes the form of heat energy trapped in water molecules in the atmosphere.

Then, you need wind. But not the kind of spastic east, west and south winds that ordinarily crisscross the atmosphere. Derecho wind is unidirectional and has to be strongly sustained, at least at first.
Like many extreme weather events, a derecho starts with a storm, Herzmann said. That strong, unidirectional wind pushes the storm along, its precipitation and evaporation cooling the air below and around it. As the storm moves, a "blob" of cold air builds, particularly in the upper reaches of the towering cumulonimbus clouds that march along at the storm's front.

In time, the blob of cold air becomes denser then the air around it and pours down out of the sky like water from a bucket. Already moving in the direction of the winds, the fall gives the cold air significant additional speed, and it flows forward as wind, the new vanguard of the storm. Meteorologists call this wave of cold air a "downburst."

At this point, most storms would dissipate, their accumulated energy spent. But when the system is moving into a region of high heat and, more importantly, high humidity, the storm can actually feed off that heat energy, rebuilding and repeating the cycle. And as anyone east of the Rocky Mountains can tell you, there's been plenty of excess heat energy in the country for the past several weeks.

Easy to identify, difficult to predict

"All that humid sticky air that's been stuck with us for a week or so, that's the rich fuel the storm feeds off of," Herzmann said.

As cold air pours down from above, driving out in front of the storm, warm air is pushed up and over it like dirt rising over a bulldozer's shovel. The upward trajectory of the air gives shape to the towering cumulonimbus clouds, and if the air is heavily laden with water vapor, it adds mass to the clouds, as well.

With the hot air swelling and spreading the storm, rain continues to fall behind the derecho. This forms a cold pool behind the storm front -- "like a bubble or a dome of cooler air," according to Herzmann -- that, in turn, allows more downbursts to form and the cycle to repeat itself.

Looking at radar images of the derecho, the system appears as a kind of boomerang-shaped band of high-intensity winds with a circular, cooler mass of air behind it. That boomerang -- called a "bow echo" by meteorologists -- is in fact a long line of clustered downbursts, each 2 to 4 miles wide.

That makes the derecho easy to identify, although given the speed with which one can form, that doesn't necessarily give communities much time to prepare, said Herzmann.

"The problem is that, on any given day, you're going to see small weather events that have the potential to turn into a derecho," he said. "It's still really hard to know which ones are going to roll into the full-fledged derecho and which ones will just dissipate."

No one could say climate change was the direct cause of this storm, but rising temperatures and more powerful storms have been predicted by climate models for more than two decades.

Well, is it a Derocho or a Derecho?