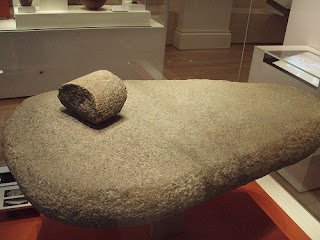 This is the first time I have come across the carbon layer in Eurasia, rather than .  In the meantime, it appears that the archeologists are now beginning to look closely at the proper horizon and will no longer overlook evidence.  This is very good news.

What is important is that the Pleistocene nonconformity is now forcing its way into the Archeological framework and perhaps we will even have an awakening to the reality of the underlying crustal shift itself.  Recall that temperate zone agriculture was essentially implausible prior to this direct crustal movement that triggered the Holocene.

In other words, this is very good news for the recognition and development of the Pleistocene Nonconformity that triggered the onslaught of the Holocene.  The extraordinary cooling associated with this event arose because the Northern Polar Icecap was shoved firmly into the taking two millennia to mostly melt away.  Things started to properly settle down around 9000BC although I suspect ice remained in Hudson Bay Lowlands and the for a long time after that.

We can now expect an onslaught of appropriate papers locating the horizon world wide.  There was a lot of ash and comet carbon in the atmosphere that would have taken a couple years to winkle out.  This will become as important a horizon as Archeology ever had.

An 18-member international team of researchers that includes James Kennett, professor of earth science at UC , has discovered melt-glass material in a thin layer of sedimentary rock in , , and . According to the researchers, the material –– which dates back nearly 13,000 years –– was formed at temperatures of 1,700 to 2,200 degrees Celsius (3,100 to 3,600 degrees Fahrenheit), and is the result of a cosmic body impacting Earth.


These new data are the latest to strongly support the controversial Younger Dryas Boundary (YDB) hypothesis, which proposes that a cosmic impact occurred 12,900 years ago at the onset of an unusual cold climatic period called the Younger Dryas. This episode occurred at or close to the time of major extinction of the North American megafauna, including mammoths and giant ground sloths; and the disappearance of the prehistoric and widely distributed culture.


"These scientists have identified three contemporaneous levels more than 12,000 years ago, on two continents yielding siliceous scoria-like objects (SLO's)," said , program director of National Science Foundation's Division of Earth Sciences, which funded the research. "SLO's are indicative of high-energy cosmic airbursts/impacts, bolstering the contention that these events induced the beginning of the Younger Dryas. That time was a major departure in biotic, human and climate history."


Morphological and geochemical evidence of the melt-glass confirms that the material is not cosmic, volcanic, or of human-made origin. "The very high temperature melt-glass appears identical to that produced in known cosmic impact events such as Meteor Crater in , and the Australasian tektite field," said Kennett.


"The melt material also matches melt-glass produced by the Trinity nuclear airburst of 1945 in ," he continued. "The extreme temperatures required are equal to those of an atomic bomb blast, high enough to make sand melt and boil."


The material evidence supporting the YDB cosmic impact hypothesis spans three continents, and covers nearly one-third of the planet, from to Western Europe, and into the . The discovery extends the range of evidence into and , the easternmost site yet identified in the northern hemisphere. The researchers have yet to identify a limit to the debris field of the impact.


"Because these three sites in North America and the are separated by 1,000 to 10,000 kilometers, there were most likely three or more major impact/airburst epicenters for the YDB impact event, likely caused by a swarm of cosmic objects that were fragments of either a meteorite or comet," said Kennett.


The PNAS paper also presents examples of recent independent research that supports the YDB cosmic impact hypothesis, and supports two independent groups that found melt-glass in the YDB layers in and . "The results strongly refute the assertion of some critics that 'no one can replicate' the YDB evidence, or that the materials simply fell from space non-catastrophically," Kennett noted.


He added that the archaeological site in where the melt-glass material was found –– Abu Hureyra, in the –– is one of the few sites of its kind that record the transition from nomadic hunter-gatherers to farmer-hunters who live in permanent villages. "Archeologists and anthropologists consider this area the 'birthplace of agriculture,' which occurred close to 12,900 years ago," Kennett said.


"The presence of a thick charcoal layer in the ancient village in indicates a major fire associated with the melt-glass and impact spherules 12,900 years ago," he continued. "Evidence suggests that the effects on that settlement and its inhabitants would have been severe." - thecuttingedgenews [They survived because they did not absorb excessive shock and merely were dumped upon been down wind.]
Posted by arclein at 12:00 AM