Micro Drones on the Hunt 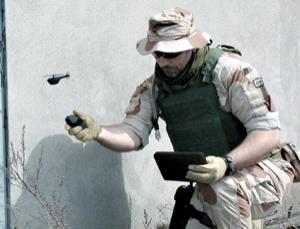 What is yet not understood is that we are on the verge of extracting modern humanity from the battlefield. The drone itself was a good start but is certainly the first generation. Its presence on the Afghan battlefield has the enemy reeling as again and again it has proven possible to decapitate any threat. In practice, the drone has been the single most effective tool in this fight and has eliminated the need to put massive numbers of boots on the ground to put pressure on the enemy. The war has gone from unwinable to effectively won. Of course, no one wishes to admit that unled combat is at best a nuisance and no creditable threat in the long term.

Car bombs do not win wars and eventually your supporters began to wonder.

Now we can envisage a battle field infested with micro drones all operated at a distance and able to call down indirect fire in an instance. They will even penetrate bunkers and their like making security impossible for an enemy force.

The take home is that a force equipped with micro drones and supported with indirect fire will be well able to drive an enemy force from the battle field. Can you imagine a war game in which gamers take charge of a real micro drone and then go hunting for targets in a real battle field? Actual firing solutions would be the controlled by boots on the ground but this augments the search with potentially thousands of eyeballs. As stated, the modern human will no longer enter the real battlefield except to salvage lives of enemy combatants.

23 July 2012 by Will Ferguson and David Hambling

Drones are getting smaller and smarter, able to navigate and identify targets without GPS or human operators

FAR from the aeroplane-sized craft that are the face of cutting-edge warfare, a much smaller revolution in drones is under way.

Micro-aerial vehicles (MAVs) with uncanny navigation and real-time mapping capabilities could soon be zipping through indoor and outdoor spaces, running reconnaissance missions that others cannot. They would allow soldiers to look over hills, inside buildings and inspect suspicious objects without risk.

Unlike their larger cousins, whose complex navigation systems let them fly autonomously for hours or even days (see "Aloft for longer than ever"), MAVs are not known for their smarts. They typically rely on a GPS signal to tell them where they are, and on human operators for nearly everything else, such as where to go, what to look for and where to land.

Now researchers led by Roland Brockers at the NASA Jet Propulsion Laboratory in Pasadena, California, have developed a MAV that uses a camera pointed at the ground to navigate and pick landing spots. It can even identify people and other objects. The system enables the drone to travel through terrain where human control and GPS are unavailable, such as a city street or inside a building.

A human operator needs to tell the drone only two things before it sets off: where it is and where its objective is. The craft figures out the rest for itself, using the camera and onboard software to build a 3D map of its surroundings. It can also avoid obstacles and detect surfaces above a predetermined height as possible landing zones. Once it selects a place to put down, it maps the site's dimensions, moves overhead and lands.

In a laboratory experiment, a 50 centimetre by 50 centimetre quadrotor craft equipped with the navigation system was able to take off, travel through an obstacle-filled indoor space and land successfully on an elevated platform. Brockers's team is now testing the system in larger, more complex environments. The system was presented at the SPIE Defense, Security and Sensing conference in Baltimore, Maryland, in April.

Vijay Kumar of the University of Pennsylvania in Philadelphia says that autonomous navigation and landing capabilities are unprecedented in a drone of this size. "Typically the information required to locate a landing site and stabilise a vehicle over it is coming in at a 100 times a second," he says. "No one else has been able to design a system so small with this kind of processing power."

With such capabilities making their way into ever smaller craft, it may not be long until the PD-100 Black Hornet (pictured), which is set to become the world's smallest operational drone, gets an upgrade as well.

As it stands the PD-100, which has been in testing by Norwegian manufacturer Prox Dynamics since 2008, can navigate autonomously to a target area using onboard GPS or fly a pre-planned route. It can also be controlled by a human from up to a kilometre away, has an endurance of up to 25 minutes, can hover for a stable view, and fly both indoors and out.

At just 20 centimetres long and weighing about 15 grams, the PD-100 makes the drone created by Brockers's team look like a behemoth. And while it may look like a toy, Prox Dynamics claims it can maintain steady flight in winds of up to 5 metres per second. This has attracted the attention of the UK Ministry of Defence, which last year issued a request for the vehicle under the name "Nano-UAS".

Aloft for longer than ever

A reconnaissance drone has flown for two days straight, fuelled by a laser beam that transmits energy from the ground to the aircraft.

Lockheed Martin and Seattle-based LaserMotive teamed up to perform the test last week in a wind tunnel in Palmdale, California, as proof that drones could be made to fly indefinitely via wireless energy transferred from the ground.

When the team stopped the flight - because the craft had surpassed the goals of the test - the battery on the drone had more energy than it started with. LaserMotive is now working on adapting the system to beam power from Earth's surface to orbiting satellites and even the moon.