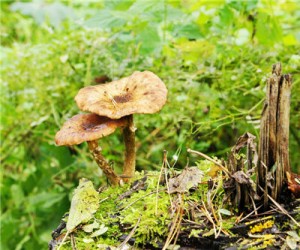 We had already come across this idea before and here we have effective confirmation through work on the underlying genetics.  The Carboniferous was a long era in which massive amounts of wood was produced, but not significantly degraded.  These formed coal seams as other forms of decay allowed the material to at least settle if not fully disappear.

In the present, bogs still produce coal seams but far more local and ultimately limited.  Imagine the Amazon unable to decay above the water logged parts.  Those forests were impenetrable.

This surely had a huge impact on available large animal forms that needs to be thought through.  These were not your modern wildwood at all and instead presented a tangle that prohibited easy traverses and certainly represented deadly cul de sacs for the unwary.

Scientists may have solved the riddle why so little coal seemed to form after the end of the carboniferous period.

Mushrooms may have evolved to allow them to fully break down wood, rather than seeing all the organic matter slip under the earth and get compressed into coal.

"Wood is a major pool of organic carbon that is highly resistant to decay, owing largely to the presence of lignin," writes the researchers.

The researchers discovered that lingin degrading fungi started to expand when coal formation dropped off.

"Molecular clock analyses suggest that the origin of lignin degradation might have coincided with the sharp decrease in the rate of organic carbon burial around the end of the Carboniferous period. "

Lead author Dminitrios Floudas, at the biology department of , published his findings in the journal Science.

The researchers write that the only organisms capable of breaking down lingin are white rot fungi in the Agaricomycetes, which include non–lignin-degrading brown rot and ectomycorrhizal species.

"Comparative analyses of 31 fungal genomes (12 generated for this study) suggest that lignin-degrading peroxidases expanded in the lineage leading to the ancestor of the Agaricomycetes, which is reconstructed as a white rot species, and then contracted in parallel lineages leading to brown rot and mycorrhizal species."