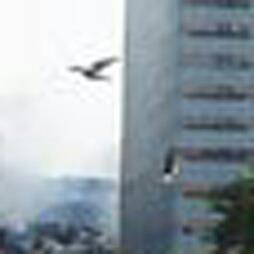 I saw this photo a while back, but Dale Drinnon got ahold of it and got some opinion in on it. Since I had come to the tentative conclusion that the 'mothman' sightings were of a giant owl and possibly of the old world variety which does exist I am pleased that others came to this conclusion just by looking at the picture.

It is clearly rare enough but that is hardly due to any lack of food. There is a near infinite supply of rabbits out there to feed no end of giant owls and plenty of full skirted evergreens to hide in during daytime. What is unusual is that it is flying during daylight and over a city. They may be overcoming their natural fears and succumbing to curiosity. Thus a sample of one is meaningless in terms of estimating the population.

Understanding their niche actually opens the door to huge populations even though we can hardly credit that at all. A nocturnal hunter that needs perhaps a couple hundred square miles of hunting ground can have a huge population in the Eastern US.

http://frontiersofzoology.blogspot.ca/2012/07/giant-owls-and-mothman.html
Recently this photo has been circulating around Facebook again and I posted a copy of it on my wall. After a good deal of discussion the consensus of opinion is that seems to be a very large bird of pretty much conventional conformation and not a kite or a model of any sort. Unfortunately there is no good way of determining the scale on a photo of this, but it seems to be quite large. Several commentators have mentioned that it does not look so much like a hawk or eagle but it does resemble some sort of an enormous owl, especially at the head end.