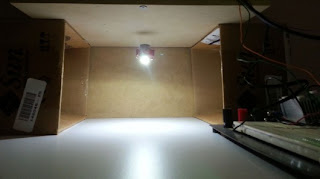 At the end of the day, magnetic levitation is well understood and is far too often a solution in search of a problem. Otherwise levitated lights are an attractive design concept and may even be worth a special effort. Unfortunately it presently needs a special environment. Thus lighting up large voids this way is still in the future.

On the other hand a powered roof panel and a floor panel underneath may do the trick provided the device could be kept isolated from the problem of human interaction. I think that it is far too likely to be problematic.

In the meantime it is a reminder that invisible forces surround us and do allow neat toys that folks like to see.

18 year-old engineering student Chris Rieger has spent the last 6 months building his LevLight system, where an LED light module floats in mid-air while wirelessly receiving its power from a coil hidden inside a wooden box

http://www.gizmag.com/rieger-wireless-power-levitating-led-light/23222/
The inclusion of a floating lamp, bed or just about any appropriately-sized household object in a room is almost certain to be received with open-mouthed wonder and demand closer inspection from the curious minds of young and old alike. Add the wireless transfer of power into the mix and you're guaranteed to have a winner. Such is the case with 18 year-old Chris Rieger's LevLight. It's not exactly huge, doesn't break any new ground in a technical sense and is more functional than flashy. Nevertheless, the floating LED is quite the visual feast.

The Electrical Engineering student from the University of Queensland Australia embarked on the six month build project after being inspired by a Jeff Lieberman sculpture called light bulb from 2007. This work not only magically suspends an incandescent light bulb in the space between solid upper and lower blocks, but also provides it with wire-free power.
Rieger describes the creation of the levitation mechanism for LevLight as the simple part of the project. He modified a Hall Effect Levitator circuit designed by Eirik Taylor to include 300 meters (984 feet) of 20awg wire for the electromagnetic drive coil and a 3-pin, 1.325mV/g linear hall effect sensor from RS components to provide feedback on the position of the wirelessly suspended light. LevLight uses a low power LED positioned on the bottom of a permanent magnet surrounded by a wireless power transfer circuit (a simple LC circuit).

Not so easy for our intrepid circuit magician was the wireless power transfer mechanism. Of course, we've covered many examples of this kind of technology here at Gizmag over the years and were I asked to choose one, it wouldn't be one of the many mobile device or electric vehicle charging developments but rather the potentially life-enhancing FREE-D system developed by researchers from the University of Washington and the University of Pittsburgh Medical Center.
Rieger's version takes the shape of another circuit modification (this time from the 4HV electronics and science enthusiast site). The setup consists of a single wire ring connected to the power source (a hacked benchtop unit made from an old 350W power supply unit and banana plug ports) and pulling 0.5A at 12V. Send and receive coils were then tuned to matched frequencies.

The drive coil and wireless mechanism are hidden from view inside a wooden enclosure raised on two cardboard box columns and, with the power switched on, the LED light floats in the space underneath. Rieger says that when the power to the levitating system is turned off (or in the event of a power failure) the LED light unit jumps up to attach itself to the base of the wooden box rather than falling to the ground.

Describing LevLight in words is all well and good, but it really needs to be seen to be fully appreciated. To that end, have a look at the demo video below.