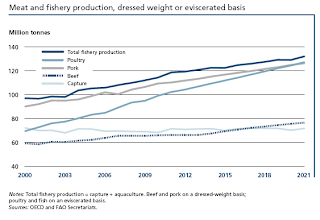 This items puts some numbers behind the stunning and continuing growth of aquaculture worldwide. Because it is widely distributed, the growth has been somewhat hidden away out of sight although the changing product mix in our supermarkets told us all something was afoot.

The industry is now maturing and beginning to displace low yield fisheries inherited from traditional choices. I expect the entire tuna fishery to be displaced by a high yield farmed fish with the same qualities.

I even expect that the wild fishery will largely be retired except for personal consumption. This will generate a massive restocking of the world's oceans that will take a couple of centuries but is nowc pretty well inevitable.


The State of World Fisheries and Aquaculture 2012 reveals that the sector produced a record 128 million tonnes of fish for human food - an average of 18.4 kg per person - providing more than 4.3 billion people with about 15 percent of their animal protein intake. Fisheries and aquaculture are also a source of income for 55 million people.


Aquaculture (fish farming), which is projected to reach about 79 million tonnes, rising by 33 percent over the period 2012–2021 compared with the 3 percent growth of capture fisheries. This projected increase is not based on much genetically modified fish adoption.

Capture fisheries and aquaculture supplied the world with about 148 million tonnes of fish in 2010 valued at US$217.5 billion.


Production growth from aquaculture keeps outpacing population growth, and it is one of the fastest-growing animal food-producing sectors - trends that are set to continue
.

Fish and fishery products are among the most-traded food commodities worldwide. Following a drop in 2009, world trade in fish and fishery products has resumed its upward trend driven by sustained demand, trade liberalization policies, globalization of food systems and technological innovations. Global trade reached a record US$109 billion in 2010 and 2011 points to another high estimated at US$125 billion.


Output from fisheries and aquaculture is expected to soar 33% over the next decade, reaching 172 million tons in 2021. Last year, 90.4 million tons of fish were caught while 63.6 million tons were raised – about 600 species bred in 190 countries. But the share of farm-bred fish is expected to pass the halfway mark around 2018 and reach 52% by 2021.
Chicken, Fish and Pork are projected to increase through 2021

The State of World Fisheries and Aquaculture 2012 (230 pages)

Stimulated by higher demand for fish, world fisheries and aquaculture production is projected to reach about 172 million tonnes in 2021, a growth of 15 percent above the average level for 2009–11. The increase should be mainly driven by aquaculture, which is projected to reach about 79 million tonnes, rising by 33 percent over the period 2012–2021 compared with the 3 percent growth of capture fisheries. However, a slowing in aquaculture growth is anticipated, from an average annual rate of 5.8 percent in the last decade to 2.4 percent during the period under review. This decline will be mainly caused by water constraints, limited availability of optimal production locations and the rising costs of fishmeal, fish oil and other feeds.

So if the this over $100 billion a year fish farming industry can develop better solutions to those problems then fish farming would grow beyond this projection.