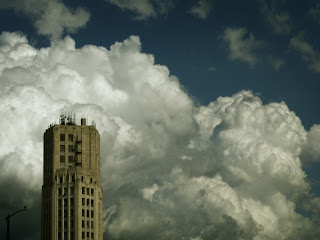 This is an amazing accomplishment and will allow us to wonderfully track airflows against theoretical models.   This will hugely increase confidence in the modeling.  I look forward to seeing this applied to thunderclouds and tornado.

With this level of processing and resolution, there is not much left that needs to be done in terms of imaging the changing atmosphere and that means testable models can be easily assembled and run.

This is good news for even climate science as we will finally be able to say specific things about cloud behavior in particular.  We may even be able to measure cloud cover properly.

A high-resolution Doppler radar has the ability to detect individual hydrometeors, such as atmospheric raindrops, over 0.5 mm in diameter research led by the Naval Research Laboratory has revealed. The discovery should further understanding of the structure and behavior of clouds, and could lead to more accurate forecasting of severe weather.

A Doppler radar sends focused microwave signals towards a target and listens for the reflection. By analyzing the doppler effect, the changes in frequency of the reflected microwaves, the radar is able to ascertain the target's velocity.

Though the principle is identical to that used by a police speed gun, the technology that comprises the high-resolution radar is rather more powerful. The 3 MW radar emits microwaves with a 0.22-degree beam-width, which allows it to interrogate a 14 cubic-meter (500 cubic foot) volume of cloud for individual raindrops from a range of 2 km (1.25 miles) at a "world's best" resolution of 0.5 m (1.6 ft). The radar was previously put to use tracking debris coming away from NASA space shuttles during launch.

The detection of raindrops is in part made possible due to the fact that these larger drops are highly reflective but occur in much lower concentrations than the much smaller particles from which clouds are mainly comprised. Cloud droplets are on average only 10-15 micrometers in diameter.

Though researchers had intended to study clouds in detail, the ability to see individual raindrops came as a complete surprise. "The signal processing of the radar returns revealed that these cloud details led to the unanticipated observations of individual raindrops - a first ever observation through remote sensing means," said Dr. Mark Anderson, a scientist at the Naval Surface Warfare Center Dahlgren Division, which contributed to the research.

The results mean that weather systems can be monitored as a whole, and right down to individual raindrops, nearly simultaneously using a single piece of equipment, and may pave the way to research into more advanced weather radar.

The findings were published in Proceedings of the National Academy of Sciences. See the sources below for the full list of contributing researchers.