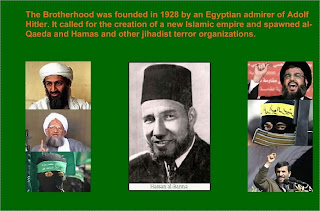 This is a sober report that needs to be understood.  The Arab world is in crisis and the Islamist movement which is strictly a political movement hiding behind religious sentiments and scriptures is presently unsuppressed and is moving to seize control of power everywhere they can.   They are Islamic Nazis including irregular militias and barbarism.  Any success will generally see all western style institutions suppressed as for example we are seeing the Turkish independent judiciary been presently suppressed.

It all leads to authoritarian and no freedom for the population and much worse it means genocide applied against selected minorities.  The question that needs to be addressed aggressively is how external forces can stop this slide to horror.  Islam itself is been outright hijacked by the Islamists and internal opposition is been crushed and has been below the radar for decades.  This is why the hijab is so visible.

Success generally means that the economy is also deeply depressed as we see in were the middle class is unable to throw off the Mullahs who have even crossed over to millennial thinking.

Islamicism will delay modernism in the Muslim world for decades to come unless it is stopped soon.

On the other hand, while the Arab Spring has given the Islamicists an open door, it has also created a crisis point that can be exploited in many ways to possibly stem the tide of Islamicism.

The good news, if we can call it such is that the underlying economies are nascent at best.  Real authoritarian control will simply block further development as actually occurred in the USSR and has happened everywhere else except when a step backward was taken as in China.  This implies that they are not a creditable military threat nor ever will be.

\If I were Alexander the Great, I would promulgate a new set of rules and demand that the community implement those rules and provide security to ensure their success.  If the leadership failed to earn my trust, then after an appropriate period, I would merely extract the women and children for relocation to safe protection and reeducation within nearby safe communities.  I cannot think of anything that could focus the mind better.  That is how one achieves an enthusiastic change in attitudes.  Likely a couple of good examples would end the nonsense.

My point is that the Islamic population needs to do what the German population did after the war with some slight encouragement.

Not long ago the Arab Spring was seen as a harbinger of democracy. It turns out that, instead, it’s creating breeding grounds for international terror—and safe havens for al-Qaeda itself.

That is not just a polemical opinion but the somber assessment of the director-general of ’s MI5 internal security agency, Jonathan Evans. The Telegraph reports that Evans, in a rare lecture this week in , warned that

Today parts of the Arab world have once more become a permissive environment for al-Qaeda.
This is the completion of a cycle—al-Qaeda first moved to in the 1990s due to pressure in their Arab countries of origin. They moved on to after the fall of the Taliban.

And now some are heading home to the Arab world again….

Evans specifically said that British jihadis, who have been training for years at al-Qaeda strongholds in and , “are known to be receiving training in the likes of and ”—supposed beneficiaries of what some saw as a wave of Facebook-driven liberalization.

The MI5 chief also confirmed that al-Qaeda is now active in , and “warned against suggestions that al-Qaeda’s threat has ‘evaporated’ following the death of Osama bin Laden and significant victories in .” He noted that , for its part, has “experienced a credible terrorist attack plot about once a year since 9/11.”

Evans didn’t say in what part of the jihadis are training. Israel, though, has been aware that—particularly since the winds of “spring” toppled Egypt’s pro-Western Mubarak regime—the presence of al-Qaeda and other global-jihad elements has been rapidly growing at least in Egypt’s Sinai Peninsula.
It was only last week that what is believed to be an al-Qaeda-linked group carried out a deadly attack at the fence Israel is trying to build quickly along its border with Sinai.

But Evans’s words carry implications beyond the region and beyond ’s own very real security concerns.

For one thing, his point that bin Laden’s assassination (along with the killing of other terror leaders in ) has hardly finished off al-Qaeda tends to undercut the great emphasis President Obama has put on that exploit.

Still more significant, though, is the fact that “permissive environments” where al-Qaeda is coming back to roost—“Arab Spring” countries like Egypt, Libya, and Syria—are also places where the Muslim Brotherhood has been gaining strength.

And Obama, while readily identifying al-Qaeda as evil and an enemy of and the free world, notoriously looks at the Brotherhood differently. Indeed, his administration has made a point of repeatedly lauding the election of Brotherhood candidate Mohamed Morsi as ’s new president.

For those free of a sentimental affinity for the Brotherhood, it of course makes perfect sense that it would be cultivating environments where al-Qaeda feels welcome. The Brotherhood is, after all, the organization from which Al-Qaeda sprang. Bin Laden had Brotherhood teachers in his youth, and current al-Qaeda head Ayman al-Zawahiri was a member of the Brotherhood in his native country of .
Indeed, the Brotherhood condemned Bin Laden’s assassination, proclaiming that “legitimate resistance against foreign occupation in any country is a legitimate right” and “request[ing] that the stop…intelligence operations against dissenters, and halt its interference in the internal affairs of any Arab or Muslim country.” In other words, a direct rebuff to what the president flaunts as a heroic moment.

A rational U.S., and Western, approach to the rapidly changing—and deteriorating—Arab Middle East requires not only recognizing that al-Qaeda is returning there, as MI5 chief Evans underscores. It also requires realizing that, while they have tactical differences and sometimes frictions, al-Qaeda and the Muslim Brotherhood are two closely related facets of the same global-jihadist, anti-Semitic, anti-American, anti-Western phenomenon.

Specific policy implications would include ceasing to back the wrong side—the Brotherhood—in Egypt instead of the right side—the more moderate and much more pragmatic Supreme Military Council; ceasing to back the Syrian rebels now that the Brotherhood-al-Qaeda front is spearheading them; and trying to prevent (which, according to one report from Middle East News Line, the U.S. is now starting to do) al-Qaeda-aligned militias from taking over Libya while there is still time.

Forestalling the region’s descent into an even worse, world-threatening maelstrom depends on finally starting to see it clearly.