One in Every Two Children in Turkey Employed as Child Worker 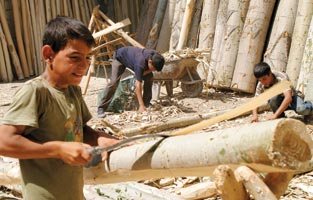 Fundamentally the only reason to employ children is because there is no school for them to go to and they soon are under foot. Until puberty, physical strength is insufficient to be overly productive. Actual endurance is weak also. Sitting them in class solves this pretty well.

After puberty, physical work becomes possible and worthwhile, yet most available is seasonal and farm related. Cleaning up is minimal generally. Again, time spent in class should be combined.

All this is driven by a society that tries to get by without a fully funded education system as if the problem will ever go away. It is the only thing that a society should invest in generally to the exclusion of everything else. It was the only thing that communism got right. They just forgot to get out of the way.

One in every two children in Turkey employed as child worker

The number of minors who are employed in Turkey amounts to 49 percent in the age group 5 to 17, alarming research by DİSK-AR, the research center of the Confederation of Revolutionary Workers’ Unions (DİSK), has shown.

According to DİSK-AR’s report, the number of children between ages 5 and 17 globally is 1.586 billion. About 306 million of these children are working, indicating that one in every five children in the world is a worker.

The data suggest that the exploitation of child labor has decreased by only 17 million children since 2004. However, this reduction does not apply to all age groups. For example, child employment for the age group 5-14 fell to 176 million in 2008 from 196 million in 2008, but the number of children in the age group 15-17 employed went to 129 million from 127 million in the same period. The rate of increase in the employment of children for boys is four-and-a-half times that of girls. According to these data, 16 percent of the world’s male children between the ages of 15 and 17 are employed. With both genders combined, one in every five children in the world is employed, the report says.

Figures in child employment in Turkey represented by TurkStat data also reflect a similar trend. The number of children employed in Turkey stood at 2.27 million in 1999, and this number fell to 958,000 in 2006. However, DİSK-AR’s report suggests that Turkey’s fight against the exploitation of children for labor has lost acceleration. The number of children who were pulled out of employment between 1994 and 1999 was 128,000. For the years from 1999 to 2006, only 74,000 child workers were taken out of employment.

Another disturbing finding of the report was the sharp increase in the number of children employed in homes and offices. According to the report, the number of children working at housekeeping jobs -- not considered part of child employment statistically -- went up to 28 percent in 2006 from 16 percent in 1994. Children between the age of 6 and 14 who are employed in homes and offices number 16 percent.

Child employment in agriculture fell from 67 percent to 41 percent.

What ever happened to apprenticeships?

If you think kids working is a bad idea perhaps the parents should just feed the kids half rations, or perhaps you can send the parents a check.