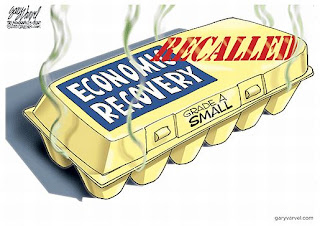 The only thing from the great depression that we avoided was the willy nilly rock bottom liquidation of the housing market. We certainly have thrown 10,000,000 folks out of work and have done nothing convincing to repair the situation and it has not self repaired at all.

The fundamental problem facing the nation in late 2008 was the need to reprice and recapitalize the housing market in such a way as to preserve the customers. Iceland had a far worse situation and managed to do just that and is now experiencing a vigorous recovery. All preserving the banks accomplished was to preserve their claim against noncollectable mortgages. Restructuring the mortgages and the customers would have worked far better and at much less ultimate cost.

Recovery in the building industry has now begun at a very low level. $50,000 fully serviced lots are been acquired for $15,000 and rolled into a build at $35,000 allowing the new build to undercut the present market. It all starts small this way but demand can be absorbed for years this way while the present housing stock finally readjusts to the pricing regime so created. Welcome to the floor.

Left alone, this will continue to be a drag on USA economic performance for a whole decade as also happened in the aftermath of the Great Depression. Recall then that lousy economic conditions lasted for a full decade then until war contracts kicked in and conscription sucked up the manpower. That will not happen this time.

The good news in the USA is not coming from the housing industry, although it should and could. It is coming from the rapid displacement of imported hydrocarbons with domestic hydrocarbons thanks to fracking and the pending displacement of diesel in long haul trucking with LNG. This is a huge transition and it needs several years at least to complete. At the same time, coal power is winding down. In fact if it were not for energy, I do not know were the jobs that have been created would have come from. That is why it did not become an outright depression.

The Worst Recovery Ever

Last Friday another dismal jobs reports was released. Non-farm payrolls rose by just 80,000 in June, coming in lower than even the more pessimistic “expert” prediction of 90,000. Unemployment stayed steady at 8.2 percent, a number that obscures the reality that many people who have given up looking for work are no longer counted. Yet president Obama remains remarkably sanguine. Speaking to a crowd in the battleground state of Ohio, he characterized the latest numbers as “a step in the right direction.” For those Americans determined to continue believing a president who plays it fast and loose with the facts, perhaps such “steps” are comforting. Yet the actual facts tell another story: president Obama has presided over the weakest recovery on record.

The stats are daunting. The unemployment rate has been above 8 percent for 41 consecutive months, yet as cited above, that number only reflects those people participating in the labor force. The labor force participation rate was 63.8 percent last month, one of the lowest percentages on record. If not for that convenient anomaly, unemployment would be 11 percent. Chronic unemployment, which reflects the length of time people remain out of work, rose to 39.9 weeks in June. That number is sixteen weeks higher than the number in June 2009, when the recession “officially” ended. And despite the president’s assertion that “businesses have created 4.4 million new jobs over the past 28 months, including 500,000 new manufacturing jobs,” the nation has endured a net decline of roughly half a million jobs during the president’s tenure in office.

Yet jobs tell only part of the story. 2011 was the worst sales year ever recorded for housing, and home values remain nearly 35 percent lower than they were five years ago. The decline in Americans’ standard of living is the steepest since government began keeping records 50 ago, and family income has declined more post-recessionthan it did in the actual recession itself. In addition, record numbers of Americans are living on food stamps and a record number are living in poverty. Thus it is no surprise that overall government dependency, defined as the percentage of persons receiving one or more federal benefit payments, is the highest in American history.

Economist Michael Boskin reveals a list of other dubious, post-WW II records set by this administration. They include federal spending as a percentage of GDP at 25 percent, federal debt as a percentage of GDP at 67 percent, and a budget deficit as a percentage of GDP at 10 percent. President Obama has also amassed more debt ($5 trillion since January 2009) faster than any president in the history of the nation, including the submission of four budgets with trillion dollar plus deficits. This marks the first time any president has submitted even a single budget above the trillion dollar mark. Add a first quarter economic growth rate revised downward to from 2.2 to 1.9 percent, a manufacturing decline for the first time in three years, and unemployment rates of 14.4 percent for black Americans, 11 percent for Hispanics and 23.7 percent for 16- to 19-year-olds, and it’s no surprise that Obama presided over another dubious milestone: for the first time ever, America’s credit rating was downgraded.

Context must be added to these numbers. For example, they have been calculated before the $1.76 trillion, 10-year cost of the Supreme Court-sanctioned Affordable Heath Care Act is added to the the national debt, and after the $787 billion American Recovery and Reinvestment Act was passed. That measure was supposed to keep unemployment below 8 percent, according to a report released by the administration.

Moreover, the former number represents the first of what is likely to be a series of revisions regarding the true cost of Obamacare. For perspective’s sake it should be noted that in 1967, the House Ways and Means Committee estimated that Medicare would cost $12 billion in 1990. The actual cost? $98 billion. Thus, even if the cost projections of Obamacare are only off by a small percentage of that miscalculation, Americans could be looking at hundreds of billions of dollars in additional–and unaffordable–outlays added to the national debt. As for the latter number, we now know that nearly a trillion dollars in Keynesian-inspired, prime-the-pump “stimulus” was an abject failure, highlighted by the president’s own admission a year later that “shovel-ready projects” didn’t exist.

It was far from Obama’s only erroneous prediction, or more accurately, broken promise. During the 2008 campaign, he pledged to create five million energy jobs, to “bring down (health) premiums by $2,500 for the typical family,” help “stop foreclosures,” and “cut the deficit we inherited in half by the end of my first term in office.” The president is oh-for-four in that regard.

Which brings us to the two recurring themes Obama consistently uses to “explain” all of his administration’s current shortcomings: the fiscal crisis was “far greater” than anyone imagined, and that the ongoing malaise can still be attributed to George W. Bush, more than three-and-a-half years after Obama became president–and more than five-and-a-half years since Democrats gained majority control of government, including two years of absolute control.

Yet while those excuses are writ large, a litany of others have been trotted out as well. The Japanese tsunamis, the BP oil spill, the Arab Spring, the economic “headwinds” created by the ongoing crisis in the European Union, the debt ceiling debate, the rich not paying their fair share in taxes, Wall Street, corporate jet owners and recalcitrant Republicans have all been employed by a president who promised he was “not going to make excuses” for a bad economy continuing under his watch. The same president who told America in 2010 that he should be “held accountable for the policies that I put in place.”

That was then. Last week in an interview with WLWT-TV in Cincinnati, Ohio, Obama offered the quintessential fall back for progressive policies that fail. “I suspect that most people in Cincinnati would acknowledge that I’ve tried real hard,” said the president, before once again blaming Republicans for a failure “to engage on a whole range of issues that I wish had happened.” One suspects trying “real hard” is of little comfort to the millions of Americans “trying” to make ends meet in an economy on the precipice of a double-dip recession.

Republican presidential candidate Mitt Romney offered a simple rebuttal to Obama’s combination of fatuous excuses and self-pity. “It doesn’t have to be this way,” he said, speaking to reporters at a hardware store in Wolfeboro, N.H.

That remains to be seen. Above all else the 2012 election is a referendum on the nature of the American experience itself. It is the election that will determine whether Americans wish to turn back the tide of Euro-style, welfare state dependency and begin to restore the notions of entrepreneurialism and exceptionalism that have made us the envy of the world, or plunge headlong into a world of chronic malaise, continued class warfare and certain bankruptcy.

The president did keep one promise he made in 2008. Obama promised to “fundamentally transform” the nation. All of the above records suggest he has succeeded, likely beyond his wildest expectations. America now has more people “riding on the wagon” than this nation has ever had. The 2012 election will determine whether or not they outnumber those pulling that wagon. Europe’s “wagon” has already stopped moving. We can learn from their experience–or be part of it.