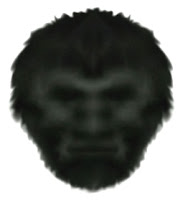 I think that we already agree that the Sasquatch is a hominid at least. As evidence and sighting reports accumulate, the picture is converging on a life way at least equivalent to the aboriginals and the bushmen who can interbreed with us.

The fur coat and the pacing gait which though human like does not include the running gait which we possess are two obvious differences. These are not significant enough to exclude them from the class of humanity itself. The real test is the issue of interbreeding and there we seem to be developing a body of evidence supporting just that along with signs of such interbreeding. Recall how we have come to understand that the neanderthal genus was absorbed into the more numerous European human stock.

The capacity to operate and work within woodlands will eventually allow significant Human Sasquatch Interaction that will be mutually beneficial. They are natural forest rangers.

We have met the Bigfoot - And he is us!

http://bf-field-journal.blogspot.ca/2012/06/we-have-meet-bigfoot-and-he-is-us.html
The two most common questions I get has lately are: Have you ever seen a Bigfoot and what do they look like? My answer is yes and just like us. The latter answer still startles many people who ask me this question, especially those not familiar with the recent developments in Bigfoot research. "But I thought it was an big ape that walked on two legs", is the response I usually get in return to that answer.

I have made eye contact twice and captured at least a dozen on video and they look remarkably "human". Mary Green took heavy criticism in the 80's and 90's because she was describing them  with human features. The "old guard" had trouble accepting they did no look like a large ape.

It was not until David Paulides published his two books "The Hoopa Project" and "Tribal Bigfoot" that the Bigfoot world started rethinking what a Bigfoot actually looked like. David recruited Harvey Pratt, an experienced and nationally respected forensic artist. Harvey then interviewed witnesses and drew what they described without any interpretation. The results were ground breaking. David had applied good solid investigative methods to his research and the results were amazing images of what the Bigfoot actually looked like. To everyone's surprise and amazement they looked like US!

The general facial features vary depending on the region of the country the Bigfoot live in. In East Tennessee the Bigfoot generally have rounder heads, only a few have a "dome" or "crest". The noses are very human like in this area. Some are narrow unlike the flat wide noses described in other parts of the country. The mouth is wider than what we would consider normal. The teeth are square and human looking. I know that some Bigfoot have pronounced canines (as do some people) but in my experience I have not seen any with "fangs". The skin color is pasty gray or black with a leathery appearance. There are exceptions to this, I once captured a video of one with very light skin, and his face was remarkably human looking.

The major feature that is different from most humans and appears to be very common with the Bigfoot in my area is what we call the "Goggle Look". They have a pronounced brow and deep set eyes. This makes them look like they are wearing a pair of dark goggles. This feature is interesting and makes it difficult to see their eyes unless you are extremely close.

"Why do you think they look like us" is usually the following up question. In my area I think it is because of interbreeding with humans for hundreds of years. The Cherokee have stories of their women actually taking Bigfoot as husbands and bearing their children. Unfortunately it is my opinion that women over the past few centuries have been forcibly taken and children as well. I think they were integrated into the Bigfoot clans and as a result we have the more human appearance of the Bigfoot in this area of the country.

This Charles Middleton drawing comes very close to representing the general look of the Bigfoot in my area of the country.

In conclusion the Bigfoot are each unique individuals. Their facial features vary but In general have a remarkably "human" quality about them. That is why I say, we have met the Bigfoot and he is us.


Below is a drawing I made based on both my eye witness encounter and video captures. I believe this to be a young female that I call "Scout". She showed herself to me briefly and we made eye contact back in 2010.
Posted by arclein at 12:00 AM