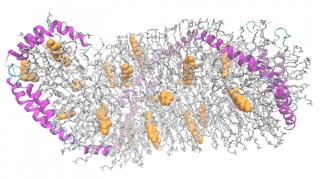 This starts by been unexpected and puts everything into question. We have several related variables in play here and no trustworthy idea on how to proceed except to become wary of any obvious cause effect pairing as simply been too simple when the effective operator has several key elements. Our minds are not trained well to draw the best conclusions and simple logic draws compelling but wrong answers. Ouch!

It is one more reminder that biology does not rely on binary logic.

It is too soon even to draw practical conclusions except to keep a watching brief and to be particularly skeptical regarding cholesterol claims.

New research carried out at São Paulo University’s School of Medicine in Brazil reveals that HDL concentrations in the blood influence the synthesis and absorption of cholesterol by the body, besides being linked to how insulin impacts on the metabolism of glucose. HDL, or high-density lipoprotein, is also commonly referred to as "good cholesterol."

In order to better understand how HDL works in the human body, a research team led by Eder C. R. Quintão selected 66 healthy volunteers recruited in the city of Campinas, in São Paulo state. The group was equally split between volunteers with low and high plasmatic concentrations of HDL.

The researchers took care to keep a balance between men and women in both groups, and to select volunteers of the same age bracket and with normal Body Mass Index (BMI). They excluded people suffering from diabetes, smokers, alcohol drinkers and users of medications that alter lipoprotein metabolism, including contraceptives. They also looked at the eating habits of the participants. “The more greens a person eats, the higher the phytosterols in the blood are – the vegetable equivalent of cholesterol. Since this was one of the markers analyzed in the study, the participants needed to follow a similar diet to avoid biased results,” Quintão said.

Data analysis showed that volunteers from the low HDL group synthesized more cholesterol, but absorbed less of it through the intestine while high HDL participants synthesized less cholesterol, but absorbed more through the intestine. “This data seemed incongruous,” Quintão noted, “because epidemiological studies show that people who absorb more cholesterol through the intestine are at a higher risk of having a heart attack. It is strange that people who absorb more cholesterol are those with higher HDL,” he said. The team now intends to start a new research to understand this paradox.
The researchers were also surprised to find that volunteers with low HDL were less sensitive to the effect of insulin in comparison to volunteers with high HDL. They found this out when they related the concentration of insulin to the glucose found in the bloodstream of people who were fasting.

“We identified this process of insulin resistance at a very early stage. They were healthy people, without symptoms and normal BMI. We don’t know whether in 10 years’ time there will be more diabetes in this group. It is a new study pathway,” he said. Existing scientific literature reinforces the hypothesis that higher concentrations of HDL improve the absorption of insulin produced in the pancreas during the metabolism of glucose in peripheral tissue.

Previous studies had highlighted the important role this lipoprotein plays in the prevention of cardiovascular diseases and atherosclerosis. Previously it was believed that HDL’s protective action was linked to its capacity to remove cholesterol from the walls of arteries and take it back to the liver, where it would be reused or excreted. “Getting a better understanding of the role played by HDL in metabolizing cholesterol is key, because the benefits of raising the levels of this lipoprotein in the blood outstrips the harm caused by the elevation of LDL (‘bad cholesterol’),” said Quintão.

He added that current medication to fight cholesterol acts by reducing LDL and VLDL concentrations, lipoproteins that also carry cholesterol to the tissues. But when they cross artery walls they get stuck and contribute to the formation of atherosclerotic plaque. “It would be ideal to develop drugs that can boost HDL concentration in the blood. Diet and exercise have little impact on this process. Regular alcohol consumption can increase HDL but it can also increase morbidity for other non-cardiovascular reasons,” Quintão added.

The researchers also looked at several proteins and enzymes that regulate the production of HDL.

Details of the research were published in Clinica Chimica Acta magazine.