US Leads Globe in CO2 Reductions

It is all about the stunning exit from the coal industry band their easy and cost effective replacement with natural gas generators. It is twenty five percent complete and I expect the conversion will continue apace until completion. That option was always superior but lacked secure supply. That is what has changed completely. Add in the conversion of long haul trucking to natural gas and we are also looking at reducing oil demand also by two to three million barrels per day. This is all happening without any significant technology been introduced at the customer level.

In the end it is a gift. Take it and smile. The real energy revolution is happening but it is not upon us yet. When I began this blog, I recognized that conversion of our energy regime had to happen, but though quite reasonably that the conversion would prove difficult and disruptive. The advent of frack gas has outright saved us from all that while we truly get our house in order and leave carbon based fuels behind. This was the major bullet and it has been ducked.

I think all coal plants can be mothballed by 2020. I also suspect that we will be able to mothball all nuclear by 2030. all this while we switch over to electric vehicles.

U.S. leads the world in cutting CO2 emissions — so why aren’t we talking about it?

Contrary to popular belief, the U.S. is making progress on climate change.

We have cut our carbon emissions more than any other country in the world in recent years — 7.7 percent since 2006. U.S. emissions fell 1.9 percent last year and are projected to fall 1.9 percent again this year, which will put us back at 1996 levels. It will not be easy to achieve the reductions Obama promised in Copenhagen — 17 percent (from 2005 levels) by 2020 — but that goal no longer looks out of reach, even in the absence of comprehensive legislation.

Why isn’t this extraordinary story a bigger deal in U.S. politics? You’d think Obama would be boasting about it! Turns out, though, it’s a little awkward for him, since several of the drivers responsible are things for which he can’t (or might not want to) take credit.
Awkward: that whole recession thing

First off there’s the Great Recession, which flattened electricity demand in 2008. It has never recovered — in fact, in part due to 2011′s mild winter, it has even declined slightly: 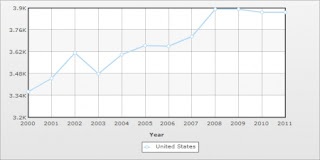 For obvious reasons, boasting about the environmental benefits of the recession is not something Obama’s eager to do.

The second big driver is the glut of cheap natural gas, which is currently trading at the 10-year low of about $3 per million British thermal units. This is absolutely crushing coal, the biggest source of CO2 in the electric sector:

The share of U.S. electricity that comes from coal is forecast to fall below 40% for the year, its lowest level since World War II. Four years ago, it was 50%. By the end of this decade, it is likely to be near 30%. 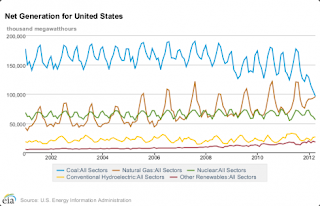 In April, coal and natural gas both contributed 32 percent to the U.S. electricity mix — equal for the first time since EIA started collecting data in the ’70s. This is, as Alexis Madrigal emphasizes, an extraordinary shift, unprecedented in the history of the U.S. electrical system.

It’s helpful to Obama to be able to point to cheap natural gas when people accuse his EPA of killing coal. And it’s helpful in his effort to claim “all of the above.” But fracking’s potential environmental and health impacts has quickly made it a flash point with his environmental base (and his Hollywood base), so it’s at the very least a fraught subject.

A less significant driver of the switch from coal to natural gas is the EPA’s long overdue rollout of new or tightened clean-air rules onmercury, SO2 and NOx, and CO2. Those rules may do more work later on down the line when/if natural gas prices rise again, but for now the best analysis [PDF] shows that natural gas is doing most of the work killing coal. Nonetheless, EPA regs have proven a source of potent right-wing attacks on Obama and he’s probably not eager to call undue attention to them.

Thus: silence in the political world

So: given the fact that the decline in emissions is driven, at least in the conventional narrative, by an explosion in fossil fuel production, a recession, and a series of EPA regulations, it’s not hard to see why Obama isn’t eager to put it front and center. It’s got a little something for everyone to hate.

And of course the right isn’t eager to talk about it either, since conservative dogma tells us that there’s no way to grow the economy and shrink CO2 emissions at the same time … and yet, uh, that’s what’s happening. At the end of 2012, our economy will be much larger than it was in 1996, yet its carbon emissions will be the same. If conservatives acknowledge that it’s possible to loosen the link between climate pollution and economic growth, they’ll have to explain why we shouldn’t do a whole lot more of it.

Still, while the story has remained largely sub rosa in political media, there are several overlooked details that paint a happier picture than the conventional one above. There’s more to this story than natural gas and recession.

Happy: Coal’s getting its ass kicked by activists

First, it isn’t just natural gas and EPA taking coal out — it’s the kick-ass anti-coal movement! Fighting tooth-and-nail, plant-by-plant, it has blocked new construction and shut down over 100 existing plants.

The campaign has been so disciplined and successful that it’s drawn the support of NYC Mayor Michael Bloomberg, who does not typically invest his own money in feel-good symbolism. He expects accountability and he’s getting it. Like the man said, “Ending coal power production is the right thing to do.”

Renewable energy still represents a small portion of U.S. electricity generation, but that fact obscures its outsized impact. The U.S. doesn’t need to add a ton of renewables for things to start shaking loose.
Here’s growth over the last decade:

One thing that jumps out is that renewables are growing much faster in some places than others. South Dakota now gets 22 percent of its electricity from wind, Iowa 19 percent. The top two states in total installed wind are Kansas and Texas. The top two for wind jobs are Iowa and Texas. That’s three red states and a deeply purple one — a wedge separating clean energy from the climate culture wars. That portends accelerating changes in the political economy. 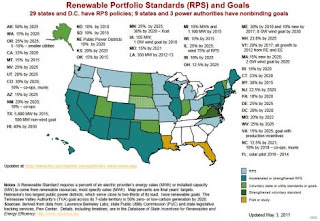 Installed wind and solar have doubled in the U.S. since Obama took office. Costs for solar are plunging like crazy and onshore wind powermay be competitive with fossil fuels without subsidies by 2016. The National Renewable Energy Laboratory says the U.S. could get 80 percent of its power from renewables by 205o. Given that “official” projections of renewable energy growth have been consistently beneath the mark, it’s not unreasonable to think we may beunderestimating future growth.

And renewables don’t have to get that big to start making waves. The sun shines most when the most electricity is being used — “peak demand” — so it serves to sharply reduce peak prices. Turns out that’s where utilities make a lot of their money. U.S. utilities are being forced to crank off coal plants when peak prices drop and then crank them back on afterwards.

It is no fun to turn coal plants on and off — it’s slow, laborious, and kills their economics. More and more, utility managers are turning toward upgraded, smarter grids and more flexible, responsive “mid-load” plants (i.e. natural gas). By hacking off peak prices, renewables will make the dynamics even worse for coal, well before they reach a large proportion of total electricity.

So renewables are a bigger part of this story than they appear, and getting bigger.

Happy: Demand is leveling off long-term

It’s not just the recession that’s bringing down U.S. energy demand — the leveling off of demand is a long-term trend. The U.S. Energy Information Administration (EIA) projects energy use will grow quite slowly through 2035: 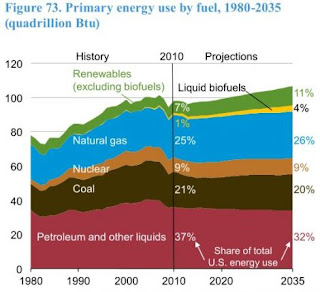 For instance, few projections anticipated the sharp decline in driving in the U.S., which has been driven (ahem) as much by cultural and demographic factors as by economics.

Or consider the dramatic progress in energy use in buildings, which was also not anticipated by EIA. From Architecture 2030 comes this graph, which compares the EIA Annual Energy Outlook (AEO) projections on U.S. building stock from 2005 with the ones from 2012: 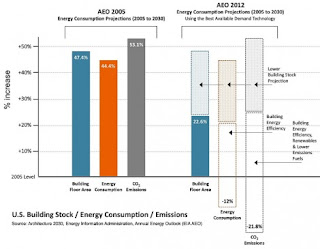 The growth in U.S. building stock is slowing (in part — but only in part! — due to the recession), but growth in building energy consumption is dramatically slowing, thanks to advances in energy efficiency technology. EIA now expects CO2 emissions from the building sector to decline by 2035. That’s a pretty big change from going up by over 50 percent!

And that’s just with straight-line projections. If “best available demand technologies” are deployed, it looks like this: 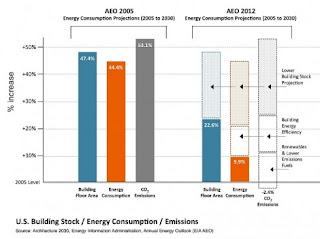 It’s within our reach to reduce the CO2 emissions of the building sector almost 22 percent! Given that building standards are one of the few areas of bipartisan agreement on energy these days, it’s not crazy to think that we’ll get closer to the latter projections than the former.

And the EIA projections for building energy consumption, Architecture 2030 notes, do not incorporate “sustainable planning applications or passive heating and cooling, natural ventilation, daylighting, or spatial configuration and site design strategies,” all of which are gaining in popularity and sophistication.

In short, there’s reason to think the demand-side story is similar to the supply-side story: official projections are dramatically underestimating potential.

Worry, but be happy

To sum up: yes, the explosive growth of natural gas and the Great Recession played a big part in U.S. climate emissions declining in recent years. And either of them could reverse in years to come. But they are not the whole story. There are real transitions underway — seedlings that can be watered and fertilized.

As Brad Plumer notes, America’s modest progress to date still leaves the world on a pathway to climate catastrophe. But it also shows that projections are not destiny. Things can change, and quickly.