The ability of natural gas to slash greenhouse gases by forty percent has always been understood and obvious. Now the calculations have been tightened up and we have certainty. But that had never been the limitation anyway. We merely lacked supply, now resolved for a long time with Frack gas. It is now economically advantageous to shutter coal plants and put up gas plants. The sheer flexibility makes another huge advantage .

As sufficient reserves are established we can expect to see gas plants been built in their wake all taking out coal plants in the process.

The additional advent of LNG for long haul trucking is also arriving quickly.

Now I do not think that we will be able to totally replace coal plants, but ten percent is a good start and suggests that we will see a forty percent conversion.

All this alleviates our transition out of expensive oil into pending fusion based technologies now in the midst of commercialization and ongoing investment in alternative energy and grid upgrades.


Switching from Coal to Natural Gas reduces Greenhouse gases by 40%

No matter how you drill it, using natural gas as an energy source is a smart move in the battle against global climate change and a good transition step on the road toward low-carbon energy from wind, solar and nuclear power. This is from a new study by Cornell Professor Lawrence M. Cathles, published in the most recent edition of the peer-reviewed journal Geochemistry, Geophysics and Geosystems.

From a greenhouse point of view, it would be better to replace coal electrical facilities with nuclear plants, wind farms and solar panels, but replacing them with natural gas stations will be faster, cheaper and achieve 40 percent of the low-carbon-fast benefit.


Cathles study, “Assessing the Greenhouse Impact of Natural Gas,” includes additional findings about expanding the use of natural gas as an energy source, and the climate impact of “unconventional” gas drilling methods, including hydraulic fracturing in shale formations. They include:


* Although a more rapid transition to natural gas from coal and some oil produces a greater overall benefit for climate change, the 40-percent of low-carbon energy benefit remains no matter how quickly the transition is made, and no matter the effect of ocean modulation or other climate regulating forces.


* Although some critics of natural gas as a transition fuel have cited leakage rates as high as 8 percent or more of total production during drilling – particularly hydraulic fracturing extraction – more recent industry data and a critical examination of Environmental Protection Agency data supports leakage rates closer to 1.5 percent for both conventional and hydrofractured wells.


* Even at higher leakage rates, using natural gas as a transition to low-carbon energy sources is still a better policy than “business as usual” with coal and oil, due to the different rates of decay (and hence long-term global warming effect) of CO2 released in greater amounts by burning coal and oil and any methane released during natural gas extraction.


* Using natural gas as a transition fuel supports the push to low-carbon sources by providing the “surge capacity” when needed, or a buffer when solar and wind production wanes. 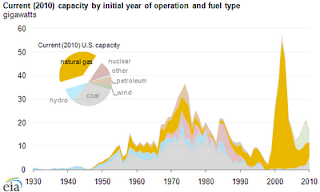