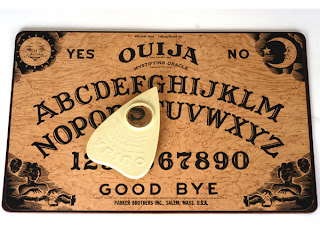 If the Ouija board in fact taps our subconscious, then it is the obvious tool to use to query that same subconscious. Here using just that premise, an experiment was designed and a non random response was gained. Thus opens the door to legions of directed experiments whose results will have the power of been other than merely random.

The result itself may still be unsatisfactory, but any scientist who has chased needles in haystacks soon learns to use a whole range of odd informants so long as it can be done safely. Dowsing is one that is well known that begs proper explanation.

There is a lot of work to be done and a lot of imagination to be applied to the problem. However we have here demonstrated the reality of the underlying effect itself and can now proceed with confidence.

Beloved of spiritualists and bored teenagers on a dare, the Ouija board has long been a source of entertainment, mystery and sometimes downright spookiness. Now it could shine a light on the secrets of the unconscious mind.

The Ouija, also known as a talking board, is a wooden plaque marked with the words, "yes", "no" and the letters of the alphabet. Typically a group of users place their hands on a movable pointer , or "planchette", and ask questions out loud. Sometimes the planchette signals an answer, even when no one admits to moving it deliberately.

Believers think the answer comes through from the spirit world. In fact, all the evidence points to the real cause being the ideomotor effect, small muscle movements we generate unconsciously.

That's why the Ouija board has attracted the attention of psychologists at the University of British Columbia in Canada. Growing evidence suggests the unconscious plays a role in cognitive functions we usually consider the preserve of the conscious mind.

Take driving your car along a familiar route while planning your day. On arrival, you realise you were not in conscious control of the car, it was your "inner zombie", said Hélène Gauchou at theAssociation for the Scientific Study of Consciousness conference in Brighton, UK, this week. "How can we communicate with that unconscious intelligence?"

Gauchou's approach is to turn to the Ouija board. To keep things simple her team has just one person with their finger on the planchette at a time. But the ideomotor effect is maximised if you believe you are not responsible for any movements - that's why Ouija board sessions are most successful when used by a group. So the subject is told they will be using the board with a partner. The subject is blindfolded and what they don't know is that their so-called partner removes their hands from the planchette when the experiment begins.

The technique worked, at least with 21 out of 27 volunteers tested, reports Gauchou. "The planchette does not move randomly around the board; it moves to yes or no. It seems to move almost magically. None of them felt responsible for the movement." In fact some subjects suspected that their partner was really an actor - but they thought the actor was deliberately moving the planchette, never suspecting they themselves were the only ones touching it.

Goucher's team has not yet used the technique to get new information about the unconscious, but they have established that it seems to work, in principle. They asked subjects to answer 'yes' or 'no' to general knowledge questions using the Ouija board, and also asked them to answer the same questions using the more orthodox method of typing on a computer (unblindfolded). Participants were also asked whether they knew the answer or were just guessing.

When using the computer, if the subjects said they didn't know the answer to a question, they got it right about half the time, as would be expected by chance. But when using the Ouija, they got those questions right 65 per cent of the time - suggesting they had a subconscious inkling of the right answer and the Ouija allowed that hunch to be expressed (Consciousness and Cognition, DOI: 10.1016/j.concog.2012.01.016).

The team now plan to refine the technique, as a normal Ouija board can take too long to deliver an answer - up to two minutes. "We're trying to develop a reducted friction device," says Gauchou. She's even developing a "Ouija app".