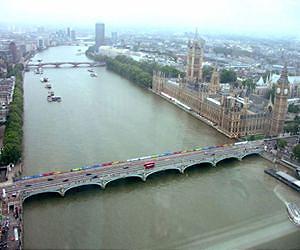 This is a reminder that nature can recover swiftly if we step up to the plate and simply stop the damage. It takes pretty active processes to destroy the riverine biome. I go further and desire proactive watershed management that augments natural processes. However, just cessation of tossing toxins in the river does plenty.

We still have problems with excess nutrients to deal with and that will take decades of conversion to biochar methods to resolve. The transition to universal organic methods will also take decades even knowing it is superior.

In the meantime, rivers will once again thrive with fish.

Urban rivers throughout England and Wales have improved dramatically in water quality and wildlife over the last 20 years. That's the conclusion of one the largest studies of national trends in river health ever undertaken. After decades of pollution, typically from poorly treated sewage and industrial waste, rivers in or near Britain's major urban areas are regaining insects such as mayflies and stoneflies that are typical of fast-flowing, oxygen-rich waters.

The range of invertebrates found has also increased, on average, by around 20%. Researchers from Cardiff University's School of Biosciences carried out an independent analysis of data supplied by the Environment Agency using almost 50,000 samples from thousands of rural and urban locations.

The team puts the general improvement down to industrial decline, tighter regulation and improved wastewater treatment over recent decades.

The recovery has not been universal, however. Rivers in some rural upland areas - such as Wales and parts of northern England - appeared to deteriorate slightly. The team is now investigating these trends further.

Another important finding was that drought years reversed the recovery - at least temporarily.

Dr Ian Vaughan, lead author of the study said: "These important results show how benefits to river biodiversity - the huge array of species that live in our rivers - have arisen from investment and long-term restoration intended largely for other 'river ecosystem services' such as drinking water and sanitation."

Co-author, Professor Steve Ormerod, added: "While some pollutants are still problematic, there is no doubt that this is a major success story that shows what can be achieved by effective environmental regulation.

"These are very large improvements not only for river ecosystems, but for the many people who live, work and play along their banks everywhere from Burnley to the Black Country or from Merthyr Tydfil to Cardiff."

Head of Catchment Management at the Environment Agency, David Baxter, said: "High quality environments promote wellbeing and creativity, so improvements in rivers are important for wildlife, people and the economy.

"It is great to see this independent analysis confirm that urban rivers are recovering, but there is still more work to do. We're working with farmers, businesses and water companies to reduce pollution and improve water quality and we have plans to transform more than 9,500 miles of rivers in England and Wales by 2015."

A paper describing the study appears in the current issues of the prestigious international journal, Global Change Biology.