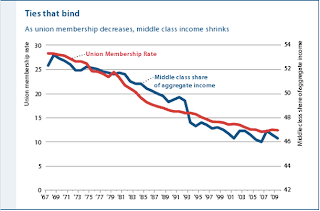 What has been poorly understood is that substantial pauses are excellent in terms of restoring productivity and way more important it severs the buildup of daily connections with coworkers that drain time and critical focus. What is more, the rest learn to operate independently from your presence. All this can only help productivity.

A global regime for workers applied everywhere is obviously a best choice and the chart below tells us that we are closer to that than we think. It likely reflects a best choice solution also.

The USA has continued to operate outside the apparent norm and likely this policy needs to be both rethought and also applied to China and India and elsewhere. It is noteworthy that Germany made a virtue of the imposed labor rules after WWII and the unintended consequence was that it worked out to the benefit of the employers.

The bottom line is that common labor laws work well if they are universal. Some will attempt to game them to their own cost or the cost of an unnecessary middleman.

We work ourselves to death, while people in other countries take holidays, get family leave and have paid sick time during vacations.
July 4, 2012

Imagine this: You work 25 hours a week at the McDonald’s in Cairo, New York, and have finally earned two weeks of paid vacation. You set out on a bike trip. On the first day in the saddle, you hit a pothole and crash, cracking your collar bone. You sit on your couch for the rest of your vacation watching the Tour de France. Tough luck.
Unless you worked for McDonald’s in Europe. If you did, you would be entitled to a fully paid do-over, according to a June 21ruling of the Court of Justice of the European Union, the highest court in Europe (whose rulings must be followed by all member states). This court ruled that all European workers are entitled to their full vacation after they have healed:
“A worker who becomes unfit during his paid annual leave, is entitled at a later point to a period of leave of the same duration as that of his sick leave.”

This means that European workers can take their paid sick leave during their paid vacations, and take their vacations all over again, and guess what? American corporations who do business in Europe, like McDonalds, have to pay for it!
And the comparisons between American and European workplaces get worse: Not only do American corporations with operations in Europe have to provide their workers with paid sick leave during worker vacations, but also, by law they have to provide paid vacations in the first place, which in most countries amounts to a month or more.
In the U.S. there is no legal obligation at all. If you get a paid vacation it’s either because the company “gave” it to you or because you achieved it through collective bargaining. Here’s a table comparing developed nations by statutory minimum annual leave and paid public holidays. Read ‘em and weep. 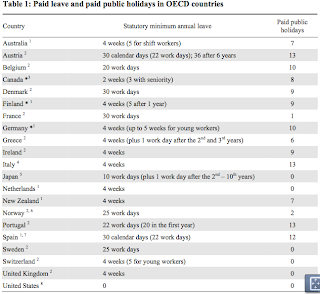 ##
Clearly, corporations have more than enough money to provide us with the same vacation plans as they do workers in Europe. But they would rather “let the market decide” – which is French for setting up and taking advantage of a downward spiral in wages and benefits. It’s not a coincidence that defined pension funds in the U.S. are becoming extinct (but not so in Europe). It’s not a coincidence that median family wages are declining. It’s not a coincidence that public and private sector workers are being pitted against each other as the downward spiral accelerates. It’s not a coincidence that working people in this country are being asked to sacrifice in order to pay for the damage that financial elites have done to our economy.
In Europe workers are not fighting each other. Rather they are standing in the way of any and all efforts aimed at eliminating their cherished benefits – benefits that go to union and non-union members alike. Even the austerity-minded German political leadership dare not touch those cherished vacations.
So next time you get some time off, think about what it might be like to have paid maternity and paternity leave or have a couple of months vacation at full pay (and, of course, full protection against illness while on vacation) ... and then maybe think about how we might join together to fight for these very basic human rights that nearly the entire human race, except us, enjoys.

Please correct me if I'm wrong. We are still primarily a Capitalist society and Europe by and large is a Socialist society. As such, the respective governments will undoubtedly pass laws favoring the underpinnings of their societies.

The undeclared war going on in the US right now is capitalism v. socialism.

Who will win? It doesn't matter they both want absolute control over the masses.

Would you like your health care jammed down your throat or presented in a manner reflective of a free-market economy?

What the article fails to present are some of the more egalitarian laws also enjoyed by our European employee counterparts; In Germany the work week is only 35 hours. In France an employer has a very difficult time when they want to fire an employee. In Holland the CEO of a company can not make more than 30x the salary of the lowest paid employee. These are 3 examples of the inherent differences of a Socialist Europe when compared to a Capitalist USA.

While both systems have shortcomings, I think it prudent to observe that Americans still have the opportunity to ascend economic boundaries whereas Europeans are primarily marketing their products and services to us for similar reasons.