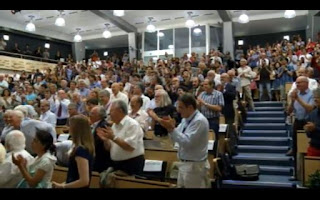 Well, it appears that we are there with the Higgs. This is good enough.

Now we have nailed down the mass it becomes possible to work around that.

All this took an awful long time, but we had obviously narrowed it down to the point that such a discovery was close at hand. There is much more to learn yet, but some of that will come fairly quickly.

In the meantime, all predicted particles from the standard theory have now been shown to be real.

http://ca.news.yahoo.com/particle-worlds-largest-atom-smasher-likely-higgs-boson-091800326.html
Physicists are more than 99 percent sure that they've found a new elementary particle that is likely the long-sought Higgs boson.

Evidence for the new particle was reported today (July 4) by scientists from the world's largest atom smasher, the Large Hadron Collider in Switzerland. Researchers reported they'd seen a particle weighing roughly 125 times the mass of the proton, with a level of certainty that all but seals the deal it's the Higgs boson.

"This is indeed a new particle. We know it must be a boson and it’s the heaviest boson ever found," Joe Incandela, spokesperson for LHC's CMS experiment, said in a statement. "The implications are very significant and it is precisely for this reason that we must be extremely diligent in all of our studies and cross-checks."

The Higgs, nicknamed the "God particle" (to the chagrin of many scientists, who prefer its official name), is thought to hold the key to one of the mysteries of the universe: Why do things have mass?

Its discovery represents a major step forward in our understanding of why the universe exists as it does, with matter clumping together to form galaxies, stars, planets and us, scientists say. [Top 5 Implications of Finding the Higgs Boson]

To be absolutely sure they've made a true new discovery, rather than simply seen a fluke, physicists wait for enough data so that their statistics reach a level called 5 sigma, meaning that there is only a one in 3.5 million chance the signal isn't real.

"We observe in our data clear signs of a new particle, at the level of 5 sigma, in the mass region around 126 GeV," said Fabiola Gianotti, spokesperson of LHC's ATLAS experiment. (GeV stands for gigaelecton volts, a unit of mass roughly equivalent to the weight of a proton.) Gianotti presented the findings to loud applause from physicists gathered at CERN (LHC's home facility) to hear the LHC's results.

The LHC's CMS experiment saw signs of a new particle with a mass of 125.3 GeV at a certainty level of 4.9 sigma.

"As a layman I would now say, I think we have it," CERN director general Rolf Heuer said during a presentation at the Geneva, Switzerland lab reporting the results today. "Do you agree?" he asked the gathered physicists, who responded with loud applause.

The Higgs boson is the last undiscovered piece of the puzzle predicted by the reigning theory of particle physics, called the Standard Model. Yet the model does not predict what its mass is, so physicists have to search through a wide territory to find it. The researchers can't yet be absolutely sure that the new particle they've found actually is the Higgs.

"The work now is to actually measure its quantum identity (all its quantum properties)," Caltech physicist Maria Spiropulu, who was in the audience at the LHC announcement, told LiveScience in an email. "Then we can say if it THE minimal standard model Higgs or a Higgs look-alike. We have been propelled to the future of particle physics towards the understanding of the fundamental properties of our universe in its entirety."

The LHC is the most powerful machine on Earth, capable of smashing protons together to produce huge explosions of energy that transform into new and exotic particles inside its17-mile (27 kilometer) underground loop. Yet the Higgs boson is so rare only one out of a trillion of the collisions inside the accelerator are likely to produce it, and even then, it decays almost immediately into other particles.

Over the past few years, researchers have been able to exclude certain possible masses for the Higgs, narrowing the possible window for Higgs further and further. Just this week, Fermi scientists announced that data from the largest U.S. particle accelerator, the Tevatron (which shut down last year), show the Higgs, if it exists at all, must have a mass between 115 and 135 GeV.

In December 2011, the LHC teams announced their latest findings, which restricted the Higgs to a mass between115 and 130 GeV, though with less certainty than the new Tevatron results.

"This is a really special time," said Fermilab physicist Dan Green, a member of LHC's CMS experiment, said Monday (July 2). "I remember when the top [quark] was discovered 20 years ago. This is one of the most exciting weeks I've had for a very long time." [9 Unsolved Physics Mysteries]

Today's findings come from the two general-purpose experiments at LHC, ATLAS and CMS. Both observed particle collisions independently and analyzed their observations separately. In fact, scientists from each team were not allowed to tell each other what they found until today, for fear their results would bias the other experiment's researchers toward looking for the same results.