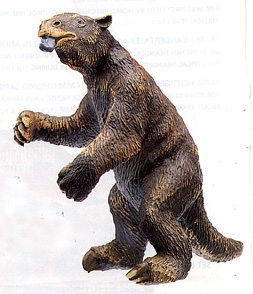 This report is odd because it does not read like a Sasquatch at all. Yet the two legged action must have been human like enough to not be noted. It reads close enough to bear to leave one rather confused as these hunters are. The two cubs remain unaware of the damage taken by the mother and continue to confront the hunters resulting in the death of one. Even then the hunters failed to identify the creature.

The creatures were observed up close and personal and by men able to identify a bear at that range. Thus it was not a bear. It was also not a Sasquatch because of its odd gait and that close inspection would have also made it clear. Generally it was more gorilla like than anything else.

I will also include the giant sloth in our list of prospective creatures. I have already spotted a couple of conforming reports and the gait is certainly conforming. It would also be clearly not a bear nor a Sasquatch and I would expect large faeces dumps to be observed.

This is the official statement from founder of the Olympic Project, Derek Randles:

This incident occurred in October of 2010 in Northern California. The persons involved will be known as Hunter 1, and Hunter 2. Hunter 1 is the shooter. Hunter 2 was driving the vehicle.


While driving down a dirt road looking for bear, hunter 1 and hunter 2 were noticing large piles of feces along their route. They commented on the amount they were seeing, and at the strange nature of it. They were having a rough time figuring out what was responsible. To big for Cougar, and didn't appear to be bear. It is important to note that they were hunting at considerable elevation. It's also important to note that they were legally hunting, with appropriate bear tags in a legal hunting area.


As the truck came around a corner they both noticed a large hair covered figure standing approx 80 to 100 yards in a meadow off to the side of the road. ( On the Bigfoot forum I previously said it was off to the left, that was my mistake, it was actually off to the right of the road.) The figure was standing on two legs with it's arms above it's head. It took roughly eight to ten steps toward the vehicle. The arms were moving a little either because it was walking, or it was intensionally swaying them. It was dirty grey in color with some black mixed in. The figure was very large. Hunter 1 decided it had to be a bear. It was completely hair covered, and from that distance good definition was impossible. Hunter 1 got out of the truck and leaned against the door aiming his riffle at the figure. He does admit that it looked strange but in his mind it had to be a bear. He did not believe in Bigfoot at that time. Hunter 2 was now looking at the figure and said " I'm not sure that's a bear". The shot was fired hitting it's mark in the chest region. The figure went down. It got back up immediately and started running on two legs, and then on all fours. It went from two legs to four legs a couple of times before it left view. A short time later they were very sure they heard it crash into the brush, although they never did confirm this. They couldn't believe what they were seeing.


They exited the truck and started across the meadow still wondering what just happened. When they reached the spot where it was standing they noticed movement in the nearby brush. Two smaller figures appeared from the brush and started circling around their position. The smaller ones were totally hair covered, but were much more black in color. They would go back and forth from two legs to four. They were exhibiting some type of chatter back and forth to each other. Hunter 1 and Hunter 2 described them as a cross between a gorilla and a bear. They said that they had very large heads, almost too big for their bodies. They also stated that the little ones had a much flatter face than a bear. They spent as much time on two legs as they did on four. The smaller figures began getting closer and closer, at on point, just a few yards. One of them climbed up a small outcrop above hunter 1. Hunter 1 started to get the feeling he might be attacked. He made a quick decision, turned and fired. The figure went down and rolled right down to Hunter 1's location. He lifted it up, and then placed it in the brush. They then decided that they needed to leave, now.


I, Derek Randles was put in touch with the hunters about two weeks later. I interviewed them both by phone extensively, and separately. I found that their story matched perfectly with no inconsistency's. I could also tell that they were natural and not rehearsed. Consequently, I've spent many many hour talking with hunter 1 one about all aspects of the story, and I completely believe him.


I then urged hunter 1 to return to the site and look around for any evidence from the incident. Upon returning they were greeted with roughly two feet of snow. The little one was not found. They concentrated their efforts in the area where they thought they heard the larger one go down. After digging though the snow for many hours they were able to find a piece of flesh, greasy fat and hair, but no body. The flesh and hair matched the color of the larger one exactly. White gray hair with some black in it.


I then asked him to forward a small piece of the flesh to Dr. Ketchum to have it analyzed for the current DNA study she's involved in. I cannot speak to the results at this time due to an NDA I've signed, but I will say that I 100% believe the story. Read into that what you will.


The site has been under snow since last November. Further study of the site is ongoing. To date, no bodies have been recovered or found. If and when a body or remains is discovered, the appropriate authority's will be notified.


The Olympic Project and Dr. Melba Ketchum do not advocate or condone the killing of a Sasquatch to advance science. That being said, if this sample can help with species verification and protection, then some good can come from a unfortunate incident. It's also important to note that this is but one of over a hundred samples the Olympic Project has contributed to this study.


Updates on this story will be available on this web site, and the story in it's entirety will be told by Hunter 1 when the time is right.