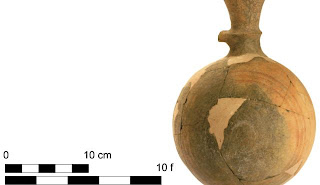 One of the first things that a large State pays attention to is creation of a uniform and practical measurement system.  Here we learn that the early Egyptian system for measurement of volume was related to the royal cubit through the circumference of a spherical vessel.  It actually sounds pretty practical as anyone would have a cubit tape with which to test out the measuring bottle itself.  Such a bottle could then be used as the standard filling device for larger vessels.  Variations on this method likely applied across the ancient world.

Relating fluid volumes to the volume of solids would not have been particularly critical either.

Let us not forget that we used barrels for bulk shipment for centuries and those containers would have been tested in exactly the same way.

As an aside, the cubit was related to the circumference of the Earth and represented some neat efforts in measuring time and large distances.  This was ultimately the precursor to the English foot.  Mankind’s original ancient measurement system adjusted to local latitudes was based on the Earth’s circumference as is the present metric system.  The only difference happens to be in the mathematics.  I cover this topic extensively in my manuscript ‘Paradigms Shift’

No, vendors didn't just guess. Ancient markets were ruled by a precursor to the metric system, which let haggling shoppers exactly how much oil or wine they were buying.

Shoppers in the ancient had a system of measurement in place remarkably like the metric system to know exactly what they were buying, according to a quartet of Israeli researchers.

In a ground-breaking collaboration, archaeologists and mathematicians from believe they have discovered a sophisticated method of calculating volume that dates back nearly 3,500 years and has its roots in Egyptian and Phoenician commerce.

Scientists believe the system, which was discerned after analyzing dozens of clay artifacts from , and the region, is unique in history.

Consider it a precursor to the metric system.

The metric system, as we know, revolves around a fixed relationship between volume and length, which is based on the cube and offers round, easily-summed numbers for calculations. How much liquid can go into a cube-shaped container? It's simple to measure: A cube that measures 10 centimeters in length, width and height will have a volume of one liter.

In ancient times, however, oval-shaped clay vessels were regularly used for commerce. So how did savvy market hagglers measure the quantities of wine, oil or any other jug-based product?

“Modern archeology assumed that traders of the ancient world could estimate the volume of oval vessels without emptying them, only with their eyes,” said Professor Itzhak Benenson, a mathematician who led the research together with his colleague Elena Zapassky and archeologists Professor Israel Finkelstein and Dr. Yuval Gadot.

It turns out, however, that the vendors of yore were much more precise.

"The people of antiquity were just as smart as we are,” said Benenson, who also heads the department of geography at . “Our research shows that they could have utilized easy-to-use approximate methods of measuring the volume of oval vessels, based on linear dimensions.”

The revelation was recently published in the journal PLoS ONE.

The researchers claim that starting approximately 3,500 years ago, (14th -10th centuries B.C.E.), Egyptians and Phoenicians used units of length and volume that were inherently related, just as the units of our modern metric system. The twist? Unlike our current system, this ancient system for calculating mass was based on a sphere, not a cube.\

The researchers had their eureka moment while constructing 3-D virtual models of hundreds of vessels discovered over the past few decades. Among them were vessels from , an ancient city in 's Jezreel valley and Finkelstein's current work site.

They knew that ancient Egyptians used the royal cubit equivalent to approximately 52.3 centimeters, as a unit of length. Their baseline unit of volume was the hekat– approximately 4.8 liters.

Rather than calculate the shape and volume of the vessels in the centimeters and liters used today, Zapassky was attempting to analyze them in terms of those ancient units. As she did so, she realized something fascinating: Vessels with a circumference close to one royal cubit had a volume close to half of a hekat.

The correlation was too common not to mean something.

Half a hekat, it turns out, was a standard-issue size for an Egyptian jar of beer. Call it a pharoah's pint, if you will.

The relationship between units is quite clear. Egyptians created units by dividing by two, Benenson explained, in the same manner that the metric system's centimeter is a meter divided by 100. So half a hekat is its own round number, just as a centimeter or millimeter is to a user of the metric system.

"As far as I know, this is the first time in history that such a measuring system appears,” said Benenson. “Everyone has always assumed that if there were a system of volume in place in antiquity, it was based on the cube, just like our system is."

Indeed, ancient Egyptians did use a cube-based system for measuring large volumes of soil excavated during construction of buildings or channels. But its use stopped there. Above ground, in the markets and homes and bustling streets of antiquity, the sphere ruled the ruler.

"There was a completely different system of measurement units," Benenson said. "And it's related, as long as we base our view of a unit on a sphere rather than a cube. We were so bounded by the idea of a cube that no one ever thought of it."

The scientists wanted to be sure that the perceived relationship between the royal cubit and the hekat was not a matter of mere coincidence. To test their theory, they also analyzed oval vessels of Assyrian origin. These jars and containers served similar purposes but were constructed in Mesopotamia, where the units of length and volume were different than in . It turns out that there were no Assyrian jars of the same proportions at all. They were all either smaller or larger than the Egyptian ones.

The project archeologists were impressed by the fact that the Egyptian system was adopted by Phoenician traders and used by them even after the New Kingdom of Egypt, which exerted its influence on the region, collapsed in the late 12th century B.C.E.

Like the great ancient Egyptian civilization itself, the sphere-based system of measurement eventually vanished.

"We also discovered vessels of a very different form – tall, narrow storage jars called 'torpedo' that were filled with liquids and loaded on Phoenician ships in the 8th century B.C.E.," said Gadot. "The torpedo vessels had a volume close to four hekat, and their height and circumference were expressed in round numbers. When the Assyrians conquered the region and brought their own measuring methods, the Egyptian system gradually disappeared."

The ancient measuring system, said Finkelstein, has implications much deeper than the transport and trade of olive oil.

"Standard measuring systems represent bureaucratic systems," he says, "which in turn show political and cultural influence. The use of the Egyptian method over time exemplifies 's power in the region."