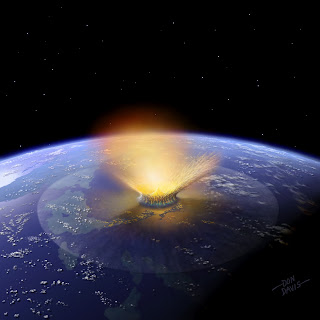 What is questioned is the role of comets in the initial creation of the Earth. Instead it could be that a mass of condritic material within the inner solar system envelope is presumed to be the mass contributor. This has the advantage of eliminating the angular momentum problem presented by comets.

It appears also sufficient to deliver the necessary volatiles.

Thus it represents the simplest solution and comet bombardment is way rarer than we imagined. It in fact eliminates the serious question of the non bombardment of everything else in the inner solar system and why Earth is so lucky.

With the new model, everything besides Venus is too small and as previously posted, Venus is a later event that happened after the inner solar system was scoured for condritic rock.

Asteroids from the inner solar system are the most likely source of the majority of Earth's water, a new study suggests.

The results contradict prevailing theories, which hold that most of our planet's water originated in the outer solar system and was delivered by comets or asteroids that coalesced beyond Jupiter's orbit, then migrated inward.

"Our results provide important new constraints for the origin of volatiles in the inner solar system, including the Earth," lead author Conel Alexander, of the Carnegie Institution of Washington, said in a statement. "And they have important implications for the current models of the formation and orbital evolution of the planets and smaller objects in our solar system."

Alexander and his colleagues analyzed samples from 86 carbonaceous chondrites. These primitive meteorites are thought to be key sources of the early Earth's volatile elements, such as hydrogen and nitrogen.

The team measured the abundance of different hydrogen, nitrogen and carbon isotopes in the chondrite samples. Isotopes are versions of an element that have different numbers of neutrons in their atomic nuclei. For example, the isotope deuterium — also known as "heavy hydrogen" — contains one neutron, while "normal" hydrogen has none.

The amount of deuterium in celestial bodies' water ice sheds light on where the objects formed in the solar system's early days. In general, bodies that took shape farther from the sun have relatively higher concentrations of deuterium, researchers said.[interesting assertion that I do not trust]

The 86 chondrite samples' deuterium content — which the team gleaned from clays, the remnants of water ice — suggest the meteorites' parent bodies formed relatively close to the sun, perhaps in the mainasteroid belt between Mars and Jupiter.

Comets, by contrast, have much higher deuterium ratios. As a result, scientists think most of them were born in the solar system's frigid outer reaches.

The isotopic composition of the bulk Earth appears to be more consistent with chondrites than with comets, researchers said. There are many different types of chondrites, and no single group is a perfect match. So our planet probably accreted its water and other volatiles from a variety of chondrite parent asteroids, they added.

The study appears today (July 12) online in the journal Science.