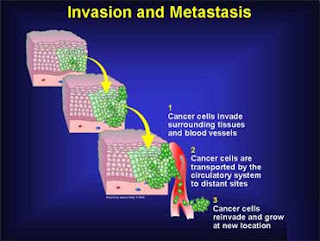 One more anti cancer agency is now firmly in play and most important, it addresses the pathway that allows metastasis. Most cancer can be lived with if it does not grow and does not metastase.

Thus a simple safe drug that stalls the disease is actually good enough and in many cases the wisest solution. Plenty of problems will emerge in the body and be fought to a stand still by the immune system. Yet when the problem is actually removed, the body lowers its defenses allowing yet another emergence. Planters warts are a good example. They can be trimmed forever as long as they are not inconvenient. Yet removal will present a new one shortly simply because the virus is still in play.

The same surely holds true for some cancers.

No mention here is made of the actual plant unfortunately, but I am sure it will easily be found. In the meantime it appears that the protein itself can be made available shortly.

Source: University of Medicine and Dentistry of New Jersey (UMDNJ)

Newswise — STRATFORD, N.J. – An international team of scientists led by Gary Goldberg, PhD, of the University of Medicine and Dentistry of New Jersey-School of Osteopathic Medicine (UMDNJ-SOM), has found that a protein from the seeds of a plant used for centuries in traditional medicines may be able to halt the spread of melanoma, a lethal form of skin cancer. The National Cancer Institute estimates that melanoma will cause more than 9,000 deaths in the United States this year. On average, melanoma kills one person nearly every hour in the USA, and many more in other countries.

Previously published research prompted Dr. Goldberg’s team to examine a protein extracted from the seeds of a legume tree that is native to parts of Asia. References to this tree being used medicinally can be found in ancient Chinese documents that date back more than 400 years. Dr. Goldberg and his colleagues found that MASL, a specific component found in the plant’s seeds, interacts with a receptor called podoplanin (PDPN) that is expressed by many types of cancer cells. This discovery seemed profound as they and other investigators found that the PDPN receptor promotes tumor invasion and metastasis to other parts of the body that are sources of the vast majority of cancer deaths.

“Cells, even when they are cancerous, tend to stay put,” Dr. Goldberg explained. “PDPN allows tumor cells to break out of their microenvironment, invade new areas and metastasize. Our laboratory research shows that MASL not only significantly reduces cell migration, it also inhibits cancer cell growth.”

Dr. Goldberg collaborated with other investigators at UMDNJ, Nagoya University, the University of Michigan and GlaxoSmithKline to find that MASL targets the PDPN receptor to inhibit the migration and growth of melanoma cells in cell culture and mouse models. The findings appear in the July 23 edition of PLoS ONE.

Although these studies focused on melanoma, MASL may also be useful to treat and prevent a variety of other cancers that express PDPN. Dr. Goldberg's group has collaborated with the Developmental Therapeutics Program at the National Cancer Institute of the NIH to find that MASL can effectively suppress the growth of lung, breast, prostate, colon, and brain cancer cells that are often resistant to current therapies.

Many anti-cancer drugs cause significant side effects because they indiscriminately kill all dividing cells rather than precisely targeting cancerous ones. Often, these medications need to be given intravenously and many do not work well on specific cancers including malignant melanoma. In contrast, Dr. Goldberg's findings indicate that MASL can be taken orally to effectively combat cancer.

The researchers also found that MASL caused no noticeable side effects at doses necessary to inhibit cancer cell growth and migration. “The absence of any noticeable side effects isn’t surprising,” Dr. Goldberg said. “For centuries, MASL has been taken as a component in medicinal plant extracts used to treat a variety of ailments including cancer. According to standard traditional protocols, these preparations contain very high doses of MASL, yet we can not find any reports of toxicity from its use.”
Dr. Goldberg and his colleagues have recently founded a company named Sentrimed to develop MASL and other diagnostic and therapeutic agents for animals and humans.

Journalists who wish to interview Dr. Goldberg regarding this study should contact Rob Forman, UMDNJ News Service, at 973-972-7276 or formanra@umdnj.edu.

The University of Medicine and Dentistry of New Jersey (UMDNJ) is New Jersey’s only health sciences university with more than 6,000 students on five campuses attending three medical schools, the State’s only dental school, a graduate school of biomedical sciences, a school of health related professions, a school of nursing and New Jersey’s only school of public health. UMDNJ operates University Hospital, a Level I Trauma Center in Newark, and University Behavioral HealthCare, which provides a continuum of healthcare services with multiple locations throughout the State.