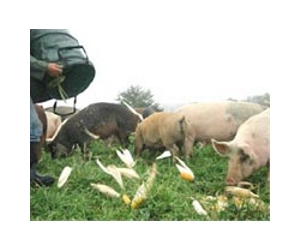 This is a nice bit of work that will even be economically viable. I also wonder were else this type of thinking may apply. Obviously it will allow a more efficient use of certain feeds and this is good.

by Susan Jongeneel for Illinois News


Phosphorus is a vital nutrient for pig growth, but pigs do not always digest it well. Research conducted at the University of Illinois has determined how adding various levels of the enzyme phytase to the diet improves how pigs digest the phosphorus in four different feed ingredients. Improving phosphorus digestibility has positive implications for producers' bottom lines as well as for the environment.

"What we discovered was that for corn and corn germ, we had a low digestibility without phytase, but as we added phytase to the diet, we increased the digestibility quite dramatically," Stein said.

"When we added phytase to DDGS, we did not see a significant increase in digestibility because the digestibility was already very high. And the same was true for HP DDG," said Stein. "What this tells us is that the effect of phytase depends on the particular ingredient. If it's an ingredient that has a lot of phosphorus bound to phytate, we see a nice response, but if it doesn't have much phosphorus bound to phytate, we don't see nearly as much of a response."

The researchers developed equations to predict the response to every level of phytase supplementation up to 1,500 units.

This research will help producers and feed companies to increase the digestibility of phosphorus in ingredients they are already feeding, thus avoiding the expense of adding dicalcium phosphate or monocalcium phosphate to swine diets.

Stein's lab is continuing its research into phytase supplementation and is currently testing different sources of canola meal and soybean meal. He and his team plan to conduct similar research for all major feed ingredients used in U.S. swine diets.

The study was published in a recent issue of the Journal of Animal Science and was co-authored with doctoral candidate Ferdinando Almeida.
Related Links
Posted by arclein at 12:00 AM