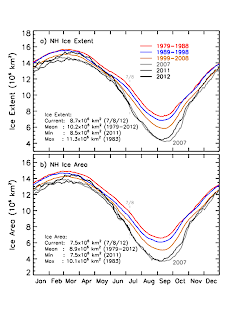 First off, the areal minimum is presently on the way to surpassing the areal minimum of 2007. secondly the Areal maximum during the winter was toward the high part of the range. Thus there is simply a lot less ice out there. Again this conforms to the expected changes.

Way more important, we now have a good number for the decadal decline in the sea ice itself. It is thirteen percent. What we lack is a determination on how it may be calculated and it is also suggestive of misleading ideas. Thirteen percent loss since 1970 means a twenty five percent decadal loss at present which is pretty close to reality for the past decade. An awful lot of old sea ice is now gone and what is left is been ground up a lot slower been located disadvantageously.

The right combination of winds similar to 2007 could largely clear the Arctic now.

As posted in the past, this decline appears due to an increase in warm waters been injected into the Arctic from the Gulf Stream. This same phenomena is also inducing a warmer northern Hemisphere. It is noteworthy that we have a counter trend in the Antarctic. For this reason I look to current flows for decadal climate drivers and millennial climate drivers.