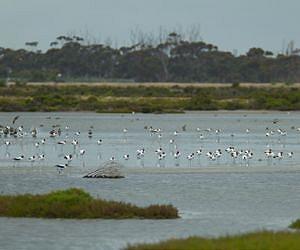 I have no doubt that the 8200 year event or pulse was caused by the draining of Lake Agassiz. This is actually quite recent and it clears up the time frame question for me. It is my conjecture that ice Cap decay began with the Pleistocene Nonconformity which I place around 13,000 years ago. The earlier date proposed here most likely reflects the level of uncertainty. In the event a pulse of melt water would have initiated the process as unstable ice was melted out. Thereafter the ice loss was slower and took centuries. Even 8200 years ago the flushing of Lake Agassiz was only the beginning of the last phase. This implies that remnant ice resided in the Canadian North far into historical times. From 13000 BP to say even 5000 BP it took 9000 years to eliminate the Ice Cap. None of this is properly fitted into climate modeling efforts I am sure and represents a significant unknown in terms of historical understanding of the climate.

Since the total loss was approximately 300 feet for the entire period and pulse losses amount to less that fifteen feet, it turns out that the actual rate of change experienced was around one meter per century in terms of sea level. I suspect that the cultural record likely supports that.

This also informs us that the assumption that permafrost is a stable phenomena is possibly misplaced. More properly the Northern forests are slowly changing in the face of the stable Holocene climate and are possibly undergoing evolutionary transformation.

The only thing that protects the stability of the Arctic Ice is the existence of the Greenland Ice Cap Remnant. Yet its loss may be in the cards although that seems unlikely.

The cause of rapid sea level rise in the past has been found by scientists at the University of Bristol using climate and ice sheet models. The process, named 'saddle-collapse', was found to be the cause of two rapid sea level rise events: the Meltwater pulse 1a (MWP1a) around 14,600 years ago and the '8,200 year' event. The research was published in Nature this week.

Using a climate model, Dr Lauren Gregoire of Bristol's School of Geographical Sciences and colleagues unearthed the series of events that led to saddle-collapse in which domes of ice over North America became separated, leading to rapid melting and the opening of an ice free corridor.

Evidence of these events has been recorded in ocean cores and fossil coral reefs; however, to date the reason behind the events was unclear and widely debated.

Ice domes up to 3 km thick (three times the height of Snowdon), formed in regions of high snowfall and higher topography, such as the Rocky Mountains. Together with the saddles - lower valleys of ice between the domes - these made up the ice sheet.

Towards the end of the last ice age, at the time of mammoths and primitive humans, the climate naturally warmed. This started to melt ice at increasingly high elevations, eventually reaching and melting the saddle area between the ice domes.

This triggered a vicious circle in which the melting saddle would lower, reach warmer altitudes and melt even more rapidly until the saddle had completely melted. In just 500 years, the saddles disappeared and only the ice domes remained.

Dr Gregoire, lead author of the study, said: "We didn't expect our model to produce such a rapid sea level rise. We got really excited when we realised that the events we simulated corresponded to real events!"

This research not only identifies the process which caused the melting of the North American ice sheet and the trigger for rapid sea level rises in the past, but also increases our understanding of the nature of ice sheets and climate change, allowing further questions to be posed and, with more research, answered.

Research like this allows climate and ice sheet models to be tested against evidence from the real world.

If climate models are able to reflect patterns observed in natural records our confidence in them increases. This is particularly relevant where the models are also used to investigate the effect of climate change on ice sheets in the future.

The study was funded by the NICE Marie Curie Research Training Network and the NaturalEnvironment Research Council (NERC), and the numerical model simulations were carried out using the facilities of the Advanced Computing Research Centre (ACRC) at the University of Bristol.

Water News - Science, Technology and Politics
Posted by arclein at 12:00 AM