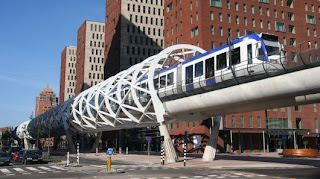 This is called plucking the low hanging fruit. Battery tech has now reached the point in which these types of fixes can be implemented. This was a problem that was recognized in the late nineteenth century and underscores just how slow progress can be.

We will be doing the same thing in our EVs were again it is all about battery technology.

The really good news is that we are really getting there. A storage build out along with smart power management will easily double the output of our installed base.

A decade of energy investment is paying of handsomely.

Electric commuter trains, while quiet and fast, have one glaring inefficiency – when they brake at a station, the energy of the moving train is lost, even when the motors are electrically reversed. Capturing the electrical energy generated during braking is simple, but efficiently redistributing it through the power grid is not. The result, in too many systems, is that the braking energy is simply wasted. Now an energy storage project in Philadelphia aims to capture and efficiently utilize that braking energy, providing a clear view into the potential of the forthcoming smart grid.

In a conventional electric train, the electrical energy generated while stopping is fed immediately into the third rail (or the overhead power lines). The problem is that the third rail has a very limited capacity for absorbing a sudden flood of electrical energy. As a result, the voltage of the third rail rises considerably. However, the third rail voltage is controlled within narrow limits to avoid system instabilities. If the voltage rises too much (as when slowing at a passenger stop), the excess energy must be dissipated. The third rail is then connected to a resistive load, and the braking energy is converted into waste heat.

In essence, the power grid of the electric train system does not have sufficient capacitance to absorb the braking energy while staying within acceptable voltage, frequency, and phase limits (these are AC systems, so a bit more complicated than if the systems were DC). The Southeastern Pennsylvania Transportation Authority (SEPTA) has embarked on a pilot project to better absorb and reuse braking energy. Their engineering studies showed that while practical banks of ultracapacitors cannot provide sufficient additional capacity, banks of lithium-ion batteries can. The power is not only recovered efficiently, but is fed back into the regional power grid rather than remaining confined within the commuter train's third rail system.

The SEPTA pilot project captures the braking energy of trains through a large scale battery storage system. The braking energy is then fed into the regional transmission organization, which coordinates movement of wholesale electricity in 13 eastern states and the District of Columbia, where it is sold to neighboring power grids in the frequency regulation market.

The SEPTA project takes a different path. Located in a substation that serves five or six stations on SEPTA's elevated train line, it senses when the track voltage is too high (about 800 volts), and pulls energy from the third rail, storing it in a large-scale lithium-ion battery (the MAX20 Intensium Max containerized battery bank) from Saft Batteries. The MAX20 can store and deliver power at a 1.5 MW rate, and has a storage capacity of about 500 kWh – roughly equal to 280 Toyota Prius battery packs. When the voltage of the third rail falls too low, the battery pushes current into the third rail. This negative feedback mechanism leads to a stable operating point for the smart grid and efficient reuse of the braking energy.

The operating software balances the simultaneous processes of regenerative capture, regulation performance, and energy market participation by selecting in which market to participate based upon market pricing, battery state of charge, and availability of regenerative energy from the trains.

“We are excited to be a part of this groundbreaking achievement,” said Audrey Zibelman, CEO and President of Viridity Energy, the designer of the operating software. “In a smart grid world, two‐way digital information exchange opens up new horizons. By harnessing the regenerative braking power of the trains and empowering SEPTA to become a virtual power generator that can provide valuable and environmentally responsible service to the electric grid, we can fulfill the promise of interconnected systems on the grid and behind the meter responding dynamically to reliability and economic signals to strengthen the grid.”