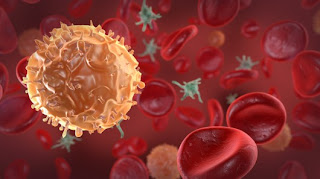 This sounds like it will be available rather faster than suggested here. This is a direct way to observe the immune system at work. Surely just in terms of tracking circulatory inflammation with no therapeutic input at all it is a major advance. One would not need to supply an actual therapeutic load in such a case as the body is already doing just fine.

Such a protocol would naturally isolate locales of serious damage and support intervention.

In the meantime most medical problems sooner or later express themselves generally in terms of inflammation. This will allow actual mapping of the inflammation and confirmation.

This could turn out to be a major advance.

Magnetically-labeled blood cells could provide a boost to medical research

Scientists have had success in tracking the passage of blood cells within the body, by labeling them with magnetic particles (Photo via Shutterstock)

Thanks to advances in stem cell therapy, it is now possible to use engineered white blood cells to fight diseases such as HIV within the human body. When such treatments are being developed, however, it can be difficult to track where the introduced cells travel within a patient’s system, and how many of them make it to their target. Now, thanks to research being carried out at the University of Edinburgh's Centre for Cardiovascular Science, those cells can be magnetically labeled.

Vascular surgeon Jennifer Richards led a team that introduced tiny magnetic iron oxide particles into white blood cells (also known as immune cells). Six test subjects were then given separate thigh muscle injections of the magnetically labeled cells, unlabeled white blood cells, and just the magnetic material. Up to seven days later, the labeled cells still showed up on MRI (magnetic resonance imaging) scans of the subjects. By contrast, other methods of cell-labeling only allow the cells to be tracked for a maximum of a few hours, or expose the patient to radiation – which MRI does not.

The magnetically-labeled cells so far appear to be harmless to the recipients, as two test subjects were given increasingly large doses of the cells through a vein, and showed no adverse effects.

Additionally, the cells are still able to serve their immune function. When the labeled cells were injected into a subject with an inflamed area on their thigh, they moved to that area as they normally would. Nonetheless, Richards has stated that more human tests will be required before the magnetic labeling of blood cells is able to be widely practiced.

A paper on the research was recently published in the journal Circulation: Cardiovascular Imaging.
Source: American Heart Association