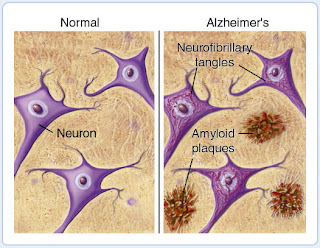 This is the first serious glimmer of hope regarding Alzheimer’s. Simply having a protocol that stops the disease or even seriously slows it is powerful. It provides a real reason for early diagnosis. Up to now, it merely informed the victim about how he or she was going to die.

Now we can quickly halt the progress of the disease at least until the body has truly aged out and is well past its prime. This is hugely important in terms of securing and retaining an active old age.

I think that actual damage reversal is going to prove a seriously intractable problem not least because nature itself has not seen reason to fix the problem already. Thus I am more than happy to stop the decline and recommend the victim explore chess. It is a blessing

In a small trial, patients given an existing drug showed no cognitive decline over three years.

Alzheimer's patients given a drug that is already used to treat immune disorders saw their condition stabilize in a small study presented at a conference this week.

Study participants were given the compound—known as intravenous Ig, or IVIg—for three years. During this period, they showed no signs of further cognitive decline or memory loss. Although the study was small, it provides hope that the devastating disease can be stopped or slowed in humans.

The work was presented on Tuesday at the Alzheimer's Association International Conference 2012 in Vancouver by Norman Relkin, a neurologist at the Weill Cornell Medical Center.

Alzheimer's is the sixth leading cause of death in the United States; 35 million people are estimated to have the disease today, a figure that is expected to balloon in the coming decades. Its biological basis is not well understood, but researchers suspect that plaque buildup in the brain caused by aggregates of a protein called beta-amyloid or a protein called tau (or perhaps both) contributes to the death of neurons seen in those with the disease.

Currently, patients have no drug treatment options for preventing or even slowing Alzheimer's. Some medications are available to treat the symptoms, but their beneficial effects are only temporary. This week's announcement provides a welcome glimmer of hope that more options may be on the way.

"This study suggests that you can potentially stop or slow down Alzheimer's disease," says Kun Ping Lu, a physician scientist at Harvard Medical School, who studies the disease. "It suggests for the first time in a human clinical trial that this disease can be stopped if we have a way to identify it early."

One reason Alzheimer's is so difficult to treat is that symptoms take a long time to appear. "Common sense in the field is that Alzheimer's takes more than a decade to develop, and by the time your brain has damage, it's very hard to reverse," says Lu.  "If we are going to treat Alzheimer's disease, we have to find out as early as possible which patients are going to eventually get [it]."

State-of-the-art diagnosis involves monitoring brain scans and biomarkers in the spinal fluid to predict the onset of the disease years before it takes effect, as well as observing clinical symptoms through mobility and memory tests. And recent research suggests that the first signs of Alzheimer's can even be detected decades before symptoms arise (see "An Alzheimer's Warning 25 Years Before Symptoms Show").

All participants in the study had mild to moderate Alzheimer's disease. Only four received the optimal dose of IVIg over three years.  These patients showed no decline from their baseline state in cognition, memory, daily functioning, or mood—all expected effects of the disease. Patients who initially received a placebo but were later switched to IVIg treatment declined more slowly while receiving the drug.

IVIg, which is sold by the drug company Baxter and others, contains a mixture of antibodies isolated from the pooled plasma of blood donated by healthy people. The assumption is that this blood by-product contains antibodies from the healthy donors that attack the damaged proteins in Alzheimer's patients.

Should the product prove effective in an ongoing 360-participant trial, it could become difficult to meet demand. Two weeks of treatment with the drug costs $3,000 to $5,000. However, Dean Hartley, director of science initiatives at the Alzheimer's Association, says if the treatment is shown to be successful in larger trials, then the positive results are likely to be followed by a jump in production. He also expects such results to inspire a large number of scientific studies aimed at identifying the functional ingredients in the immune mixture, so that others could potentially develop a synthetic form.

"I really do hope that it turns out to work, because then it gives a good platform to start finding out what components are in there," Hartley says. "What is it in the IVIg—is it selective antibodies against beta-amyloid, against tau, or something else?"