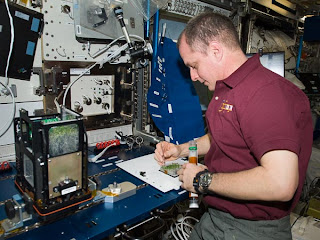 This is one of those very basic yet simple questions that needed to be answered. That the answer turns out to be unconditional is a bonus. We can grow plants happily in space. We all expected that doing so would become both necessary and doable. Now we know it is doable.

We will soon be considering how to do the engineering as our access to space gets serious and expansion begins in earnest. Bubbles on the moon are particularly attractive. I wonder if it may be possible to produce an active cellular structure of hexagonal units framing water filled bubbles that also contain living algae to assist in filtering the incoming radiation from the sun. The plumbing would be a challenge of course but not impossible.

Such a construct would provide excellent living space inside for humanity. It will still be much easier to operate underground with a mile of rock providing protection to the dome.

New finding boosts the prospect of growing crops in space or on other planets.

When researchers sent plants to the International Space Station in 2010, the flora wasn't meant to be decorative. Instead, the seeds of these small, white flowers—called Arabidopsis thaliana—were the subject of an experiment to study how plant roots developed in a weightless environment.

Gravity is an important influence on root growth, but the scientists found that their space plants didn't need it to flourish. The research team from the University of Florida in Gainesville thinks this ability is related to a plant's inherent ability to orient itself as it grows. Seeds germinated on the International Space Station sprouted roots that behaved like they would on Earth—growing away from the seed to seek nutrients and water in exactly the same pattern observed with gravity. (Related: "Beyond Gravity.")

Since the flowers were orbiting some 220 miles (350 kilometers) above the Earth at the time, the NASA-funded experiment suggests that plants still retain an earthy instinct when they don't have gravity as a guide.

"The role of gravity in plant growth and development in terrestrial environments is well understood," said plant geneticist and study co-author Anna-Lisa Paul, with the University of Florida in Gainesville.

"What is less well understood is how plants respond when you remove gravity." (See a video about plant growth.)

The new study revealed that "features of plant growth we thought were a result of gravity acting on plant cells and organs do not actually require gravity," she added.

Paul and her collaborator Robert Ferl, a plant biologist at the University of Florida in Gainesville, monitored their plants from the Kennedy Space Center in Florida using images sent from the space station every six hours.

Grown on a nutrient-rich gel in clear petri plates, the space flowers showed familiar root growth patterns such as "skewing," where roots slant progressively as they branch out.

"When we saw the first pictures come back from orbit and saw that we had most of the skewing phenomenon we were quite surprised," Paul said.

Researchers have always thought that skewing was the result of gravity's effects on how the root tip interacts with the surfaces it encounters as it grows, she added. But Paul and Ferl suspect that in the absence of gravity, other cues take over that enable the plant to direct its roots away from the seed and light-seeking shoot. Those cues could include moisture, nutrients, and light avoidance.

"Bottom line is that although plants 'know' that they are in a novel environment, they ultimately do just fine," Paul said.

The finding further boosts the prospect of cultivating food plants in space and, eventually, on other planets.

"There's really no impediment to growing plants in microgravity, such as on a long-term mission to Mars, or in reduced-gravity environments such as in specialized greenhouses on Mars or the moon," Paul said. (Related: "Alien Trees Would Bloom Black on Worlds With Double Stars.")

The study findings appear in the latest issue of the journal BMC Plant Biology.