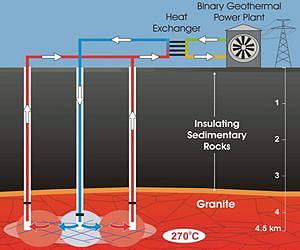 I do not take any of these concerns too seriously since they are so public anyway. All commodity issues get solved in time.

What is good it that geothermal is becoming a mastered art while the whole sedimentary stack is accessible for hydrocarbons today however scant the production is per cubic meter. I have also thought that biological solutions will one day be used to scour all that rock clean if we cared enough. The truth is that we will leave the hydrocarbon regime behind a lot sooner that is imagined yet.

Seven years ago, it did not look quite so solvable but the speed of investment into these solutions has changed all that. Our engineers have become brave.

by Mark Shwartz of the Precourt Institute for Energy at Stanford University.
Stanford CA (SPX) Dec 04, 2012


Developers of renewable energy and shale gas must overcome fundamental geological and environmental challenges if these promising energy sources are to reach their full potential, according to a trio of leading geoscientists. Their findings will be presented at the fall meeting of the American Geophysical Union (AGU) in San Francisco in Room 102 of Moscone Center West .

"There is a critical need for scientists to address basic questions that have hindered the development of emerging energy resources, including geothermal, wind, solar and natural gas from underground shale formations, " said Mark Zoback, a professor of geophysics at Stanford University.

"In this talk we present, from a university perspective, a few examples of fundamental research needs related to improved energy and resource recovery."

Zoback, an authority on shale gas development and hydraulic fracturing, served on the U.S. Secretary of Energy's Committee on Shale Gas Development. His remarks will be presented in collaboration with Jeff Tester, an expert on geothermal energy from Cornell University, and Murray Hitzman, a leader in the study of "energy critical elements" from the Colorado School of Mines.
\
Enhanced geothermal systems

"One option for transitioning away from our current hydrocarbon-based energy system to non-carbon sources is geothermal energy - from both conventional hydrothermal resources and enhanced geothermal systems," said Zoback, a senior fellow at the Precourt Institute for Energy at Stanford.

[ this is the gift we use if nothing else comes along that is a lot more attractive. It is like hydro power inasmuch as it is a capital pig at the beginning but then lasts forever – arclein]

Unlike conventional geothermal power, which typically depends on heat from geysers and hot springs near the surface, enhanced geothermal technology has been touted as a major source of clean energy for much of the planet. The idea is to pump water into a deep well at pressures strong enough to fracture hot granite and other high-temperature rock miles below the surface.

These fractures enhance the permeability of the rock, allowing the water to circulate and become hot. A second well delivers steam back to the surface. The steam is used to drive a turbine that produces electricity with virtually no greenhouse gas emissions. The steam eventually cools and is re-injected underground and recycled to the surface.

In 2006, Tester co-authored a major report, which estimated that 2 percent of the enhanced geothermal resource available in the continental United States could deliver roughly 2,600 times more energy than the country consumes annually.

But enhanced geothermal systems have faced many roadblocks, including small earthquakes that are triggered by hydraulic fracturing. In 2005, an enhanced geothermal project in Basel, Switzerland, was halted when frightened citizens were shaken by a magnitude 3.4 earthquake. That event put a damper on other projects around the world.

Last year, Stanford graduate student Mark McClure developed a computer model to address the problem of induced seismicity. Instead of injecting water all at once and letting the pressure build underground, McClure proposed reducing the injection rate over time so that the fracture would slip more slowly, thus lowering the seismicity. This novel technique, which received the 2011 best paper award from the journal GEOPHYSICS, has to be tested in the field.

Zoback also will also discuss challenges facing the emerging shale gas industry. "The shale gas revolution that has been underway in North America for the past few years has been of unprecedented scale and importance," he said.

"As these resources are beginning to be developed globally, there is a critical need for fundamental research on such questions as how shale properties affect the success of hydraulic fracturing, and new methodologies that minimize the environmental impact of shale gas development."

Approximately 30,000 shale gas wells have already been drilled in North America, he added, yet fundamental challenges have kept the industry from maximizing its full potential. "The fact is that only 25 percent of the gas is produced, and 75 percent is left behind," he explained. "We need to do a better job of producing the gas and at the same time protecting the environment."

Earlier this year, Zoback and McClure presented new evidence that in shale gas reservoirs with extremely low permeability, pervasive slow slip on pre-existing faults may be critical during hydraulic fracturing if it is to be effective in stimulating production.

Even more progress is required in extracting petroleum, Zoback added. "The recovery of oil is only around 5 percent, so we need to do more fundamental research on how to get more hydrocarbons out of the ground," he said. "By doing this better we'll actually drill fewer wells and have less environmental impact. That will benefit all of the companies and the entire nation."

Geology plays a surprising role in the development of renewable energy resources.

"It is not widely recognized that meeting domestic and worldwide energy needs with renewables, such as wind and solar, will be materials intensive," Zoback said. "However, elements like platinum and lithium will be needed in significant quantities, and a shortage of such 'energy critical elements' could significantly inhibit the adoption of these otherwise game-changing technologies." [ this is likely temporary and has more to do with earlier niche demand economics - arclein]

Historically, energy critical elements have been controlled by limited distribution channels, he said. A 2009 study co-authored by Hitzman found that China produced 71 percent of the world's supply of germanium, an element used in many photovoltaic cells.

Germanium is typically a byproduct of zinc extraction, and China is the world's leading zinc producer. About 30 elements are considered energy critical, including neodymium, a key component of the magnets used in wind turbines and hybrid vehicles. In 2009, China also dominated the neodymium market.

"How these elements are used and where they're found are important issues, because the entire industrial world needs access to them," Zoback said. "Therefore, if we are to sustainably develop renewable energy technologies, it's imperative to better understand the geology, metallurgy and mining engineering of these critical mineral deposits."

Unfortunately, he added, there is no consensus among federal and state agencies, the global mining industry, the public or the U.S. academic community regarding the importance of economic geology in securing a sufficient supply of energy critical elements.