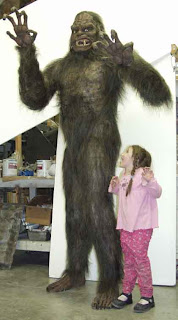 This is a decade old article and it is timely, as it displays the show evolution of scientific acceptance.  Today we are in possession of detailed DNA information that makes this creature not only real but also part human in terms of its ancestry.

A key point is that science is slowly beginning to pay attention.

My own experience began in the mid nineties when I decide to simply go through the available data to see were it led.  It led to a fresh understanding of a proper theoretical foundation for scientific method as well as a powerful case for the reality of Big Foot.  What in fact came out is that with enough data, a surprisingly clear picture will emerge from which testable inferences and questions may be drawn to be confirmed by later sightings.

I then applied the method to what is turning out to be a host of curious data points on other creatures begging for something other that lazy dismissal.  It turns out that Nessie is odd and unique until you discover hundreds of conforming lakes throughout the Northern and Southern Hemispheres all happily general their own local version of the tale.  Again all the data is local and the observers are alone unique while the necessary conditions are common but often outside human interaction.

In the meantime far too many scientists are asked for opinions that they have no right to provide.  Unfortunately too many do opine instead of stating that the data is insufficient and they personally do not care which would be an exact truth.

The Bigfoot phenomenon has now entered a state in which contact has become both plausible and possible.  It will be possible to speak to them.  We need some young researchers to pull a Jane Goodall project.  Several excellent targets now exist.

We even have all the necessary hardware to assist.

It's been the subject of campfire stories for decades. A camera-elusive, grooming-challenged, bipedal ape-man that roams the mountain regions of . Some call it Sasquatch. Others know it as Bigfoot.Thousands of people claim to have seen the hairy hominoid, but the evidence of its existence is fuzzy. There are few clear photographs of the oversized beast. No bones have ever been found. Countless pranksters have admitted to faking footprints.

Yet a small but vociferous number of scientists remain undeterred. Risking ridicule from other academics, they propose that there's enough forensic evidence to warrant something that has never been done: a comprehensive, scientific study to determine if the legendary primate actually exists.

"Given the scientific evidence that I have examined, I'm convinced there's a creature out there that is yet to be identified," said Jeff Meldrum, a professor of anatomy and anthropology at in .

Sasquatch stories go back centuries. Tales of mythical giant apes lurk in the oral traditions of most Native American tribes, as well as in Europe and . The has its Abominable Snowman, or the Yeti. In , Bigfoot is known as the Yowie Man.Bigfoot advocates hypothesize that the primate is the offspring of an ape from Asia that wandered to during the Ice Age. They believe there are at least 2,000 ape men walking upright in 's woods today.An adult male is said to be at least 8 feet (2.4 meters) tall, weigh 800 pounds (360 kilograms), and have feet twice the size of a human's. The creatures are described as shy and nocturnal, and their diets consist mostly of berries and fruits.Matt Moneymaker had been searching for Bigfoot for years. In the woods of eastern , he claims he finally came eye to eye with the elusive primate."It was 2 o'clock in the morning and the moon was a quarter full," recalled Moneymaker. "Suddenly, there he was, an eight-foot-tall creature, standing 15 feet away, growling at me. He wanted to let me know I was in the wrong place."Moneymaker, who lives in in southern , is a lawyer who runs his own marketing agency. In his spare time, he leads the Bigfoot Field Researchers Organization, a network of more than 3,000 people who claim to have seen the Sasquatch.Unfortunately, no one has been able to snap a clear picture of the beast.


Perhaps the most compelling photographic evidence of Bigfoot is a controversial short film shot by Roger Patterson in 1967, which appears to document a female Bigfoot striding along a riverbank in northern .

Now, Bigfoot advocates are increasingly turning to forensic evidence to prove the existence of the giant creature.

Investigator Jimmy Chilcutt of the Conroe Police Department in Texas, who specializes in finger- and footprints, has analyzed the more than 150 casts of Bigfoot prints that Meldrum, the Idaho State professor, keeps in a laboratory.Chilcutt says one footprint found in 1987 in Walla Walla in Washington State has convinced him that Bigfoot is real."The ridge flow pattern and the texture was completely different from anything I've ever seen," he said. "It certainly wasn't human, and of no known primate that I've examined. The print ridges flowed lengthwise along the foot, unlike human prints, which flow across. The texture of the ridges was about twice the thickness of a human, which indicated that this animal has a real thick skin."Meldrum, meanwhile, says a 400-pound (180-kilogram) block of plaster known as the Skookum Cast provides further evidence of Bigfoot's existence. The cast was made in September 2000 from an impression of a large animal that had apparently lain down on its side to retrieve some fruit next to a mud hole in the in . Meldrum says the cast contains recognizable impressions of a forearm, a thigh, buttocks, an Achilles tendon and heel. "It's 40 to 50 percent bigger than a normal human," he said. "The anatomy doesn't jive with any known animal."A few academics believe Meldrum could be right.Renowned chimpanzee researcher Jane Goodall last year surprised an interviewer from National Public Radio when she said she was sure that large, undiscovered primates, such as the Yeti or Sasquatch, exist.

But the vast majority of scientists still believe Bigfoot is little more than supermarket tabloid fodder. They wonder why no Bigfoot has ever been captured, dead or alive."The bottom line is, they don't have a body," said Michael Dennett, who writes for Skeptical Inquirer magazine and who has followed the Bigfoot debate for 20 years.Bigfoot buffs note that it's rare to find a carcass of a grizzly bear in the wild. While that's true, grizzlies have not escaped photographic documentation.Hair samples that have been recovered from alleged Bigfoot encounters have turned out to come from elk, bears or cows.Many of the sightings and footprints, meanwhile, have proved to be hoaxes.After Bigfoot tracker Ray Wallace died in a California nursing home last year, his children finally announced that their prank-loving dad had created the modern myth of Bigfoot when he used a pair of carved wooden feet to create a track of giant footprints in a northern California logging camp in 1958.Dennett says he's not surprised by the flood of Bigfoot sightings."It's the same kind of eyewitness reports we see for the Monster, UFOs, ghosts, you name it," he said. "The monster thing is a universal product of the human mind. We hear such stories from around the world."
Posted by arclein at 12:00 AM