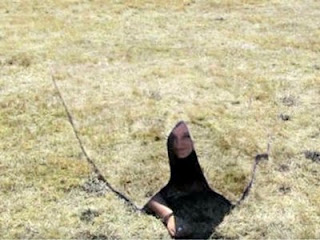 This is what we call a 'oh S**t technology. Please note that it also works in IR and Thermal spectra. So we not only own the night, but we can still hide in plain sight.

It is also likely not too tricky to make up. All speculation in this direction had the science doing hand springs and now it looks easy.

The whole topic of stealth UFOs just became inevitable now that we can do it also.

The whole topic of heavy Earth to space UFO traffic just took a decided turn simply because we can hide our own craft just as well. Military apps are obvious.

The military has done everything possible to develop a uniform that helps troops blend into whatever environment they might be in, but a Canadian firm may be the one who beat countless development contractors working on hefty tax payer budgets.

Hyperstealth Biotechnology Corp. has created, tested and given "need-to-know" demonstrations of a hyperstealth material called "Quantum Stealth" that renders its user completely invisible to any visual spectrum, to include IR Scopes and Thermal Optics.

They're so confident that they claim the only way to find a person hiding beneath the blanket is to literally "trip over them."

CNN reports that the technology is passive, meaning that it doesn't generate power or an illusion of any sort, whatever the material is, it simply "bends light around a subject."

Guy Cramer, CEO of the company, created the technology months ago, but told CNN he finally released images of it to the public in order to get an opportunity to show it to military officials.

"After enough press had been written on the subject, the U.S. Military Command finally asked to see the real material to verify that it worked," he said. "Those meetings took place with very limited “Need to Know” access and the technology is now moving forward."

On the company website, Cramer goes so far as to say that the technology will in all likelihood remain Top Secret classified until the military deems it safe for commercial markets.

This definitely looks like something that needs to be seen to be believed.


Read more: http://www.businessinsider.com/cnn-new-camoflague-technology-makes-troops-invisible-2012-12#ixzz2ErRJxdNv
Posted by arclein at 12:00 AM

Will it hide my fat?