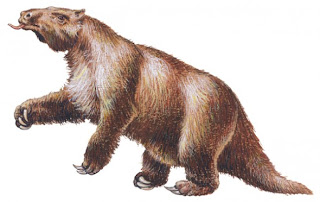 Since we are on to the trail of the giant sloth, it is useful to look at some items from South America were we already know the creature’s hide was recovered as recently as late nineteenth century.

These are compelling reports and again conform nicely to the giant sloth.

It is noteworthy that this initial survey of local cultural sources came up with a familiar suite of cryptids that are independent of other sources and not influenced by them. A lot of this information does not even exist or at best in a couple of scant reports.

The little guys are a precursor of humanity and is plausibly recognized in the fossil record. The giant sloth is also resolving as is again the existence of a giant form of humanity. Bigfoot continues to be a North American Phenom and a likely Human Almas hybrid that came over the Bering Strait.

The more data that tracks in the clearer the picture.

The Man-Beasts of South America


Guyana is a sovereign state on the northern coast of South America and borders a large percentage of the Caribbean Sea. And for adventurers and thrill seekers in search of a solid amount of undeniable mystery and mayhem, look no further than this captivating and enigma-filled land. The mountainous areas of Guyana are defined by their beauty, dense jungles, waterfalls, deep caves, luscious foliage and widely varied wildlife. But, they are also defined by their profound strangeness and menace, too.

Tales of wild and hairy man-beasts in our midst can be found just about here, there and everywhere.

North American has Bigfoot, the Caucasus Mountains are home to the Almasty, Australia is the domain of the Yowie, the Himalayas are the lair of the Abominable Snowman, and China has a man-beast in its midst called the Yeren. And then there’s Guyana’s very own version: the Didi.

In November 2007, a five-person team from Britain’s Center for Fortean Zoology – which had heard rumors of the activities of this particularly weird creature of Guyana – embarked upon an ambitious expedition to finally try and uncover the truth about the terrors that lurk in and around the small, secluded hamlet. It was during the course of this expedition that one of the team-members, Richard Freeman – a former British zoo-keeper – uncovered a wealth of fascinating information on the legendary Didi.

The beast of Guyana is a very curious one indeed: its hair is said to be red, rather than the generally reported brown and its fingers are topped off with vicious-looking claws. Apes, however, do not possess claws, which has given rise to the theory that perhaps the Didi is a surviving relic of a giant sloth, Megatherium that lived in certain parts of South America up until around 10,500 years ago.

Whatever the true nature and origin of the creature, the Center for Fortean Zoology’s team uncovered some extraordinary information on this definitive wild thing of the woods. They were told of how, only two or three years earlier, two young children – a girl and a boy, both aged around eleven or twelve – were taking a pleasant stroll across the savannah after the school day was over when, suddenly, things became anything but pleasant and they were plunged into a terrible nightmare from which one never recovered.

Out of a large group of nearby trees a giant, hairy, man-like animal raced across the grassland in the direction of the petrified pair. It grabbed the terrified girl and charged away with her at high speed, before being lost to view as it, and the screaming child, vanished into the distance. The girl, tragically and unfortunately, was never seen again.

Possibly of some relevance to the reported existence of the Didi, the CFZ personnel learned of the discovery of what appeared to be huge stone clubs and shields in the mountains. It was a discovery that led to speculation that perhaps they were fashioned by the Didi, in which case the creatures might very possibly be considered something more akin to a primitive man than an unknown type of ape. And then there is the story uncovered by the CFZ that suggests somewhat of a paranormal angle to the mysterious existence and presence of the Didi. [ a creature with claws is not about to manufacture clubs and shields. This could be evidence of a relic giant human as seen in North America and Europe - Arclein ]


On one particular day back in the 1950s, Richard Freeman was told, a man was out hunting in the mountains and had been fortunate enough to snare two wild fowl that would surely make a hearty meal for his family that night. While negotiating the treacherous terrain back home, he was shocked to see in a large tree a huge, hair-covered man seemingly asleep in what looked like a hammock constructed out of carefully intertwined vines. [ This is pure sloth - arclein]The terrified and awestruck hunter fled for his life, but still kept a tight grip on the evening’s dinner.

On returning to the village, however, something most disturbing happened: quite out of the blue, the man suddenly fell seriously ill. Fearing that the Didi had placed nothing less than a definitive, deadly curse upon him, the acutely scared man quickly consulted the local shaman. After entering a trance state and allegedly having made direct psychic contact with the creature itself, the shaman made an assurance this was fortunately not the case.

The Didi, said the shaman, had told him that it was merely shock and fear – and not a curse – that had provoked the sudden bout of illness and that, in reality, the Didi were quiet creatures that preferred to live in peace and tranquility in the mountains, far away from the day to day stresses of the Human Race. And they are not, apparently, the only mysterious hominids that inhabit Guyana.

Richard Freeman also learned that, until the 1970s, a population of very curious little fellows lived in the area. They were pigmy-like humans of a noticeably primitive, animalistic nature and appearance, only about three feet in height, hairless, who lacked any form of clothing, and wore red-paint on their faces. [ again we encounter these chaps who are plausibly floriensis in the old world and have shown up in other reports in North America ]


Possibly of relevance to this story, is the account provided to Freeman of a tribal chief that encountered what sounds just like one of these strange beasts back in the latter years of the 1960s. Although the description of the little man-thing was broadly the same as that above, the chief told Freeman that, having seen the entity up close and personal, he was sure that what some believed was paint on its face was actually a natural pigment of its skin.

The Bush People, as the chief referred to them, were not dangerous, kept to themselves deep in the forests, and lived in primitive dwellings built below large trees. Rather notably, the Bush People of Guyana were said to have a particular liking for tobacco, and would, late at night and in the early hours of the morning, raid nearby homes to steal and partake of their favorite drug of choice!

One day, the CFZ intends to make a return visit to this most mysterious of places, and perhaps then we will learn yet more of the man-beasts that lurk within its darkest depths…

Unfortunately we have the same problem as in the case of Orang Pendek, Yeti, Bigfoot, Mapinguari and the rest: the name Didi ALSO refers to more than one thing and is not an exclusive term. In Heuvelmans' reference, the Didi is supposed to leave a "Handlike" track, like that of an ape, but in Sanderson's reference the footprint is distinctly humanlike and the big toe is NOT opposed. Eberhart's Mysterious Creatures speaks of DiDis having BOTH kinds of tracks. There is no way biologically that members of the same species would ordinarily have apoelike feet AND humanlike feet AND claws besides. People are simply not careful when they are talking about Cryptids-whatever gets seen in any area generally gets labelled by the same blanket term.